In honor of World of Warships‘ official launch today, we’re celebrating what makes this naval combat game come alive. Previously, I explored the details and realism in the sights and sounds of the game, but there’s another aspect that really amps up the immersion factor: the historical accuracy of the vessels. WoWS is not just about blowing enemies out of the water with battleships, cruisers, and aircraft carriers; it’s about doing so with authentic historical recreations of said ships!
During my behind-the-scenes tour of the Wargaming office earlier this summer, I had the pleasure of speaking with Sergey Gornostaev, who as the “Museums and Militaria Relations Specialist” has arguably one of the coolest jobs at the studio. Gornostaev shared the great lengths the team goes to in order to ensure historical accuracy in the ships sent into battle in WoWS.

We’ve all seen movies where seeking historical information is an adventurous treasure hunt; it’s pretty much the same in real life for Gornostaev as well. Well, minus the dodging of giant boulders that threaten to squash him, of course! Gornostaev travels to museums and archives all over the world to talk with specialists and obtain blueprints, photos, and even movies that depict the various ships from the World War II era. He even visits with private collectors and researchers to gather as much historical data as possible so that the ships in game reflect those that originally sailed (or were planned for use) during this time period. Gornostaev’s job is to seek out institutions and individuals who may have access to the historical data, make contact, and try to secure an agreement to access that info. “Sometimes we buy necessary materials; sometimes we agree to share contacts,” he told me. Gornostaev also noted that sometimes the team will do videos or give some miniatures in exchange. Wargaming even shared enough information with one Japanese historian that he was able to publish a book about one of the destroyers.

Gornostaev has added hands to help him in the hunt for data; he told me about the interpreters and historical consultants who physically dig through all the archives and filter the information to find what the team needs to build a ship. And the information that the team is after is much more than just how the ships looked. Gornostaev discussed how the game designers need “all the necessary parameters, like how much damage this torpedo deals and how far this battleship fires.” Simply put, the types of attacks and the tech trees themselves within the game are accurate representations of the ships during the war. 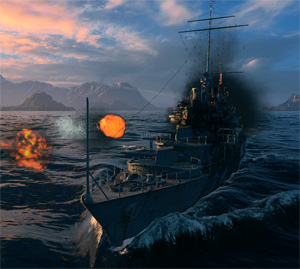 Sometimes, however, there just isn’t enough information available to give a perfectly accurate rendering of every aspect of a vessel. This can be especially true for the sides that lost — the sides whose ships and other materials were largely destroyed. Instead of stacks of blueprints, there may be few — if any; instead of hundreds of photos, there might only be one or two. Even when blueprints are available, at times they are in poor condition or not of optimal quality and therefore need to be cross-checked with other blueprints. Gornostaev pointed out the case of the Japanese battleship Yamato, where there were no original blueprints left as all were destroyed; however, after the war, there were two engineers in charge of building that vessel who then hand-drew new blueprints. At such a point in the research, the team utilizes other methods for gleaning information: One is working with historical shipwrights who ensure that things that were most important to the various nations during ship building is represented, and another is relying on material obtained from divers who’ve visited sunken ships themselves.

Then there are a few instances, Gornostaev explained, where accuracy had to give way to gameplay. The most notable example of this was in the use of landmines: While landmines were a big part of WWII naval warfare, it just wasn’t feasible to add them into WoWS.

Immerse in the history

Even those who may not be the biggest fans of lobby shooters may want to log in and give the game a spin. History buffs have every reason to hop aboard a vessel and immerse themselves in the recreation and authenticity. And since World of Warships is free-to-play, there’s nothing to lose — though someone may very well sink your battleship!

Disclosure: Travel to and lodging near Wargaming’s offices in Russia for the press junket referred to in this article were provided by Wargaming.
Massively Overpowered skips scored reviews; they’re outdated in a genre whose games evolve daily. Instead, our veteran reporters immerse themselves in MMOs to present their experiences as hands-on articles, impressions pieces, and previews of games yet to come. First impressions matter, but MMOs change, so why shouldn’t our opinions?
Advertisement

bryanjturner The ad was obnoxious (especially if you were wearing headphones, ouch), but I don’t think this article is a shill article.  MOP has positive articles on many multiplayer games.

schlag sweetleaf Nice!  And the Iowa class battleship is actually one of the American battleships you can play in this game (although it’s a long long grind to get to it).

I am surprised how much I am enjoying this.  To the extent that the “OMG not an MMO!” police allow you to run this content on the site, I hope you do so since I am enjoying the game.

bryanjturner Not a shill: It was a topic I found totally interesting when I visited the offices and wanted to share. This piece was timed for today for the launch a long while ago.

Armsbend BalsBigBrother I was going to be politically correct and mention the French and Italian navy that, to be balanced in game, might have to be a tad better than historically accurate.

*So* happy to hear that, thanks!

karmamule bryanjturner As I said in the other thread, we’re not happy about it and are trying to work it out with the third-party network to make them less intrusive without compromising our sales manager’s agreements. I’m sorry for the annoyance in the meantime. (It’s bugging us too.)

bryanjturner I agree on that horrible ad.  I sent a complaint e-mail to massively.  I will STOP going to this site if they continue running ads like that.  It’s a hard and fast rule I have that I will not be a regular visitor to any site that has that type of ad.

Thanks to that bombastic flash add your site assualted me with earlier today I can safely say I will never ever consider playing this game out of spite, furthermore I figure this is the perfect place for me to post this as this companion piece review must be coupled with said flash add to help shill for this game.