When I heard that Disney’s first foray into the new Star Wars gaming universe was a mobile-only RPG, it made me sort of angry. Not Vader-force-choking-his-wife angry, but angry enough to indulge in a brief dark side daydream involving lightsabers!

See, I started gaming in the 1980s because of Star Wars. As a kid, I wanted so badly to live in a galaxy far, far away, that I saved every possible penny and put them all toward a gaming PC that put me squarely in the cockpit of an X-Wing circa 1993. Even sans the Star Wars IP, I game because I like to be immersed in fictional worlds — or digitized versions of the real world — not because I need or want fake progression and all the related skinner box bullcrappery.

Star Wars: Uprising, then, gets off the bus with two strikes against it.

Now, I know what some of you are thinking. Jef, if you dislike grinding and mobile gaming, why are you writing about a mobile game? And the answer to that is Star Wars. If it’s a Star Wars game, I own it. It’s a sickness. Also, Disney saw fit to introduce its post-Return of the Jedi canon with Uprising. This game is literally the flagship product for the new timeline and a sort of lead-up to December’s movie main event, so not playing it — despite its gross mobile underpinnings — was never an option.

Incidentally, wouldn’t you just love to own an IP where my sort of blind brand-loyalty is the norm?

Happily, Uprising doesn’t suck. This is partly because I’m playing it on my PC thanks to BlueStacks, which means that I can use my mouse and my keyboard, I can see it on my 40″ monitor without my fingers and my finger smudges getting in the way, and I can take screenshots and Fraps all the live-long day. It’s almost like a… real game.

Platform shenanigans aside, this is a decent RPG. Would I play it for more than five minutes without the post-RotJ story sauce? Probably not. But you might, if you’re into dungeon-crawling, loot collecting, gear upgrading, and so on.

Character creation offers options in the form of sex and race (human, zabrak, twi’lek, mirialan) and a few visual presets in terms of faces, hair styles, tattoos, etc. The avatar visuals are, well… they’re good for mobile, I guess? At the risk of beating a dead gungan, I admit that aesthetics are one of many reasons that I can’t take the mobile platform seriously. The screen size and the resolution are of course limited by default, and Uprising embraces that cutesy stylized look that exists for lowest common denominator hardware and that takes me back to turn-of-the-century gaming.

You can make multiple characters, but I stuck with my initial one because each one after that requires a good bit of in-game currency. And as I mentioned earlier, I’m not here to grind.

There’s no class selection per se, since everyone starts as a Smuggler. That endeared Uprising to me straight away, and I rolled up the same character I’ve played in various Star Wars tabletop adventures set during the classic film era. As you level up, though, Uprising allows you to select skills that further define your character, so if you want a bit of Rebel Guerilla, Street Punk, or Enforcer to go along with your Smugglery self, feel free to train some of those skills at the appropriate NPC. 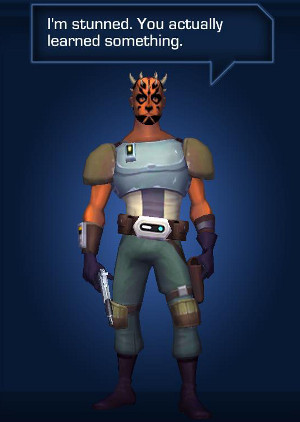 No Jedi for you

You’ll notice that I left out Jedi, and that’s because developer Kabam did too. Completely. You won’t be playing any sort of Force-sensitive in Uprising, which is appropriate and fantastic, since it’s set during a time when their fire has gone out of the universe and it’s got a multiplayer component that would immediately turn into J3d1 Uprising! if the devs had allowed it.

Many fans are unable to think beyond Jedi when it comes to the Star Wars IP, and that single-mindedness is on display en masse in Uprising’s multiplayer chat lobby. Every five minutes I see someone ask where or how to get a lightsaber, and it reminds me of all the tone-deaf people who played Star Wars: Galaxies exclusively for its godmode Jedi while ignoring the other 90% of the game and the fact that thousands of Jedi made no sense.

Fortunately Kabam is smarter than SOE in this respect, and Uprising is much better for it.

Skills are many and varied, and frankly at level 15 I’ve barely scratched the surface of what seems like a pretty deep progression system. There are passives, ultimates, directional attacks, and heals. You can also roll around the screen, dodging those big red don’t-stand-in-the-fire circles and retreating from melee attackers.

Gear is a big deal, too, as you get a couple of guaranteed drops during every story mission, and most of it is upgradeable to a certain level based on its rarity and whether or not you have enough credits and crystals. You’ll probably run out of inventory space during your first evening, but achieving level 9 unlocks salvaging, which grants you both space and additional upgrade crystals after you break down some of your crap equipment.

The bulk of my gameplay thus far has focused on the single-player story missions, which are a series of repetitive kill-everything-in-this-room exercises that unfold across various maps that look sorta similar. Before, during, and after, you’ll see cutscenes and a ton of NPC dialogue bubbles, which for me at least are the reason to play the game. The early missions, for example, take place on the new-for-Episode-VII world of Burnin Konn, and while it looks very much like a dozen other mobile game levels, the Star Wars fan in me still had a good time rolling through it.

You can choose mission difficulty based on your level and you’ll be rewarded with more challenging enemies and better loot accordingly. Multiplayer guilds are also a thing. They’re called cartels, and they can hold up to 40 players and they feature their own chat channel. Missioning with friends or cartel mates seems like the most efficient way to gear up and is the only way to get past some of the more difficult encounters.

Kabam has also thrown in a sort of companion system. While it’s not as robust as the one in Star Wars: The Old Republic, it’s similar in that you acquire minions and send them on crew runs instead of doing things yourself.

Unlike most mobile and free-to-play titles, Uprising doesn’t build in a bunch of roadblocks designed to sell you “convenience” items. If you have a lot of time and the patience for grinding, you can basically do everything without spending a dime.

Ultimately I do and do not recommend Star Wars: Uprising. It does what it sets out to do reasonably well, but unfortunately what it sets out to do is more limited than I’d like because of the platform. It’s easy to understand why Disney chose mobile for Uprising, though. From a business perspective, mobile fluff is quicker, easier, and more seductive than the big boy RPG that the IP deserves and that the huge timeline gap brought about by the end of the Expanded Universe demands.

And given the legions of time-poor thirtysomething Star Wars fans who are thirsty for The Force Awakens and its practical effects-driven love letter to the original trilogy, Disney would have been really dumb to do anything other than take the path of least resistance when draining this crowd’s wallet.

On the other hand, the lack of intrusive monetization is a big surprise, and a welcome one. If you have a long commute or some other reason for preferring small screens and limited graphics/gameplay, Uprising may well scratch your Star Wars itch for a while.