END_OF_DOCUMENT_TOKEN_TO_BE_REPLACED
So here’s a funny thing: When I watched the TwitchCon streams for Star Wars: The Old Republic, I wasn’t exactly looking to get new story reveals because most of those had already been spoiled for me. In fact, thanks to some dataminers, I even know what happens after the choice BioWare didn’t let people click on during the stream. I was looking for the information I had to be confirmed, so you can imagine my surprise when I discovered many new things.

What I’d like to do is take a few moments to discuss these new findings and the story items that were revealed during the livestreams from TwitchCon. Of course, there will be spoilers, but I would encourage you to keep reading because I will drop the spoilers behind our nifty spoiler tags, so you don’t even have to worry about things accidentally being spoiled. Here are four brand-new things we learned from the TwitchCon streams of Knights of the Fallen Empire. 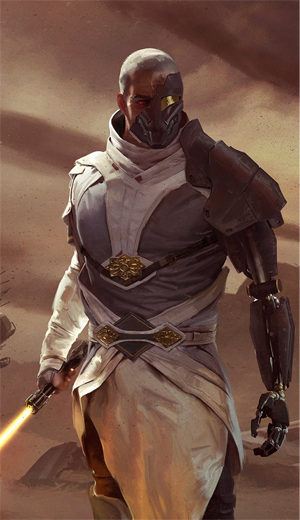 The trailer made by Blur about the twins of the Zakuul Empire doesn’t take place five years later as we first thought. The timeline does jump up, but it doesn’t happen immediately. Korriban is attacked by the twins soon after the events on Ziost or because of the events on Ziost.

This is corroborated by the fact that Darth Marr is still looking for the Sith Emperor after he disappeared from Yavin IV. He explains that he can track his presence in Wild Space, which is an area of space that hasn’t been charted yet. But it’s not the unknown regions akin to where the Chiss Ascendancy is. It’s out beyond the known galaxy. I’d say that Rishi is technically in Wild Space because it’s actually in another adjacent galaxy. But clearly Wild Space is vast. So the exact location of Zakuul is unknown.

BioWare’s not afraid to get rid of major characters

This one is clearly a spoiler, so the details will be behind spoiler tags. But it’s important to note that clearly no one is safe except for your character. And although BioWare has said that same thing when the game launched, this time it looks like it will hold, if the first chapter is any indication of what the future holds. Commence spoilers!

Click to reveal spoiler
About a month back, our friends who like to take apart the test center game client discovered some audio that revealed that a major character had died and that Valkorion had killed him. Come to find out, we get to see that happen. Since we are in spoiler territory already: When we walk into Valkorion’s audience chamber, he asks Darth Marr to kneel, and when the Sith doesn’t, Valkorion kills him.

Now the Star Wars galaxy no longer has its iconic Sean Connery impersonator. 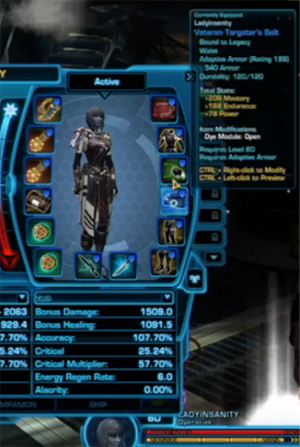 This probably will not mean a whole lot to players just getting into the game, but those who have already played through the Shadow of Revan story to completion know that this level of gear is an odd choice. Perhaps it’s just the redistribution of stats, but 188 gear is slightly less powerful than the 190 blue gear you get by running through SoR. I am kind of splitting hairs, but it’s worth noting what your power level will be when you first log into the game with a fresh 60.

Personally, I don’t think that it’s a bad set of gear. I assume the stats are very similar to the 190s, and if distributed well, the gear should be more than solid for getting through all the chapters. However, if you actually play through SoR, you’ll likely have better gear.

We have a brand-new companion menu

During Lady Insanity’s stream, we saw many things we probably shouldn’t have. She was constantly clicking on everything to see what did what. She’s the one I first saw open the armoring menu so that we could see what level of armor the fresh 60s were wearing. Also at my prompting from the chatroom, she clicked on the brand-new fist-shaped icon in the game menu.

As it turned out. that icon opened a menu for “Companions & Contacts.” I have posted an image of this menu in this post, but I would like to point out a few interesting things that I noticed.

The menu over to the left appears to be an expanding tree similar to many of the previous menus, like the Collections tab. Most prominently displayed in that menu is the list of companions. This screenshot was taken from Lady Insanity’s playthough, and clearly, she played an Imperial Agent. The Companions part of the menu shows all the companions that she has earned. With this character being a level 60, it would have all the base companions. 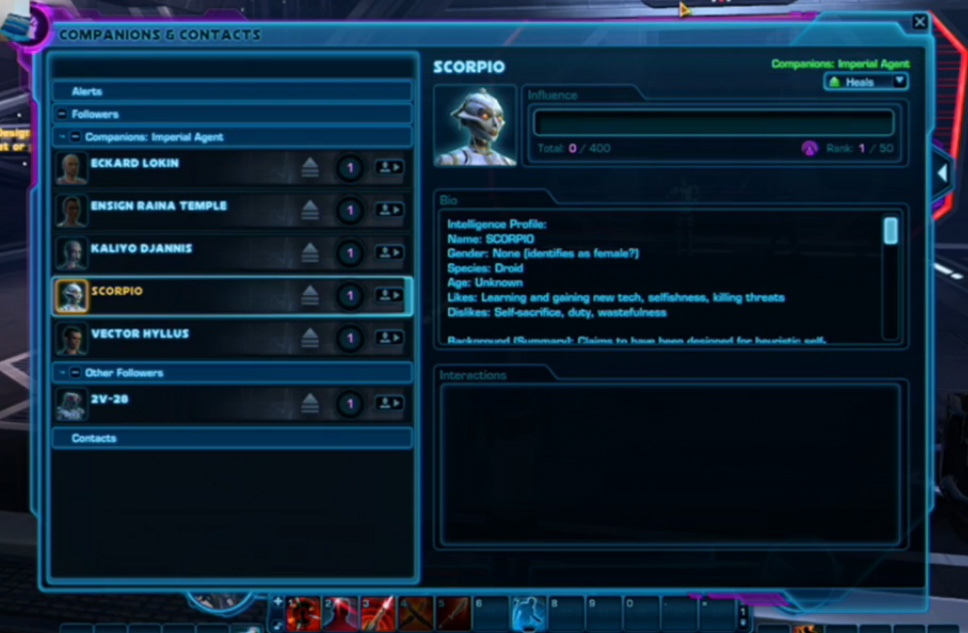 As you can see, the Other Followers section already holds the ship droid, 2V-R8 (although the image looks like it says 2V-28), but it will likely also hold other companions that we’ve unlock in some way other than the storyline, like Treek or HK-51.

The other three sections are thus far unknown to us, and the names are very ambiguous. Alerts are alerts, but what is it alerting you for? Perhaps this will be warnings that you are making one character or another mad, and your actions might cause him or her to leave. Followers are likely companions that you pick up during the course of the storyline, but they might be companions that you don’t keep. It’s also possible that they are companions that are a part of your alliance but needed a different distinction because they are Knights of the Fallen Empire only. And who knows what the difference between Followers and Contacts are. I’m assuming that contacts are like people-of-interest in the vanilla game.

On the right, a dropdown menu will change the role of the companion to healer, DPS, or tank. There is also an icon representing the role on the left. In the current setting, they look like up arrows, which indicates healer. Just below the role indicator is influence, which is the new name for affection. Interestingly, it shows the different ranks for influence, which it didn’t do before, which tells me that there will be a change in the way the mechanic works.

Lastly, a new section called interactions sits under the standard character description box. This box intrigues me. Does this mean we will in some way be able to track the conversations that had influence on our companions? Maybe I’m overthinking this. Maybe it’s just a box for tracking the old companion quests, but I think it would have been a waste of time to put something in the UI that never existed before just to use it on old content.

I did spend a lot of time on that last bit because not many people are talking about it. We saw too many things in those streams for me to talk about here. What are some things that caught your eyes?

And I’d like to give a shout out to Lady Insanity, who did a great job of getting the devs to talk about things that older fans are interested in. She usually covers other BioWare games on her YouTube Channel, but she is an avid SWTOR player and one of the friendliest people on the internet.