Time’s a-wasting! With just a month left to get ready for those terrors that await down in the subterranean world of Thalumbra, EverQuest II fans are running out of time to prepare themselves for this upcoming 12th expansion. If you find yourself in that predicament, never fear — that’s why EverQuesting is here! I know what it is like to just be moseying along, distracted by the plethora of activities in EQII, and then suddenly realize that you are not at all ready for Terrors of Thalumbra. Maybe you haven’t yet taken part in the prelude event. Maybe you aren’t quite of a level to enjoy the new content that will be coming. Or maybe you forgot to ask for the day off from work. I was just in that boat myself! The good news is that there is still time. I don’t want you to miss out on any of the hooplah, so I’ve assembled a list of to-dos to get you on the path to prepared.

Although the content in ToT is geared toward the level 100 adventurer or crafter, any level can participate in the activities leading up to the launch. And with double-XP for All-Access members going on until 3:00 p.m. EDT on Friday, October 16th, there’s an even better chance to bump your level higher.

Get in on the prelude event

One of the very first things you should be doing to prepare for this expansion is to take part in the special prelude event going on right now. The event actually appeared before we knew what the expansion was going to be about — a kind of tease to pique players’ curiosity. Sadly, the first half of the prelude event, Malicious Threat, is already over. If you’ve missed it up to this point, you can commiserate with me; for some reason I just had it in my mind that the quests would be possible throughout the event (I’d curse my trip to Ireland for distracting me in August, but… nah).

But all is not lost! You can still get in on the second half, which is fairly quick and even relatively painless to start. However, I wouldn’t dilly-dally too terribly long: Those who wait until the last minute will be out of luck because the event ends two weeks before ToT launches! Players can participate until 2:59 p.m. EDT on Tuesday, November 3, 2015. Why bother? Besides offering a bit of flavor regarding the upcoming story and zone, the event has special limited-time items! Participants can collect primordial malice baubles to purchase the items, many of which will look just perfect in at least one of your homes. There’s also stuff to wear. And don’t think you are left out because you don’t happen to be max level yet; even though the expansion is slated for those at adventurer and crafter level 100s, any level can participate.

So what is the prelude event? You might have noticed rocks spewing into the air in various locations throughout Norrath; those who ventured close to investigate found wandering elementals within the mini maelstrom. Dubbed Sundered Ground, this second half has a very short quest-line that leads players out to these anomalies. There are two versions of the quest, one for the good-aligned and one for the evil.

For those with a more sinister bent, the quest starts in Neriak. Travel to Cristanos Plaza and then head through the tunnel over to the library. There, you will speak with Lanxena T’Xith. Those who can safely travel to Qeynos and Kelethin will find the quest giver Mathal Dewpetal in Kelethin standing near the Order of the Arcane. Both send you off to investigate the anomalies and defend the world against the arcane threat. You are tasked with fighting things of your level, so travel to a zone where mobs are not grey. These threats are found in many (if not all) of the overland zones, from Antonica and Commonlands to the Tranquil Sea. Note: They are not available in zones that are not directly connected to the surface or Norrath, so Vesspyr Isle, Sundered Frontier, and the like don’t have any event rock-spewing. There is also the possibility of chronomentoring, or mentoring to a group mate, but since the encounter is entirely soloable there is no reason not to face your own level of mobs. Trust me, even if you don’t feel terribly strong for your level, the mobs are really pretty easy.

After smacking around enough undergolem elementals, an undertok clockwork will appear. Kill that, collect its clockwork mechanism, and return to your quest giver.  Of course, it wouldn’t be EQII if you didn’t have to go back out and collect eight more, right? Once you finish everything, you get to speak with your respective city’s queen and nab yourself some status, a recipe book, a title, and the opportunity to go collect more primordial malice baubles to trade in for housing items. The special items vendors are right close to your quest giver and offer an assortment of rugs, jars, bread pans, replicas, trees, trophies, books, and more — all ranging in price from one to 25 baubles. There are also cosmetic outfits and weapon skins.

XP till you drop

If you are not yet level 100 in either crafting or adventuring, you have nearly 30 days to work your way up the level ladder. Personally, I find crafting to be the faster one to ascend, but it all depends at what level you are starting. With rush order writs you can really rake in the experience, and the double XP for All-Access members right now will certainly help. Additionally, you can craft root beer during the Moonlight Enchantments event October 20th and 21st for some super quick and easy XP, climbing ever higher towards the cap.

If you need to go the adventurer route, there are still plenty of options in various zones, and tons of dungeons at every level range to dive into. If you are looking for quicker runs, try mentoring down and hitting some places a bit lower than your level. I know that Chelsith was quite the grind spot for a long, long time because of how quickly you can get through it with a friend or two. 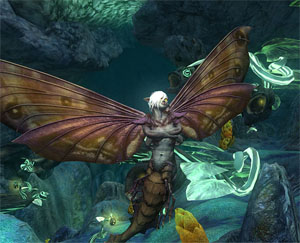 Before ToT launches, players might want to make sure their screenshot key is in tip-top working order. Why? Because the glimpses we are getting of the zone are showing not only some beautiful environs but some really unique new creature models. A sampling of the new creatures we will encounter includes poxfiends, cepholex, fathomlurkers, and  aberrants. The recent Thalumbra preview offered a few choice shots of what players can expect. Personally, I am a total fan of subterranean stuff and luminescence, so I am totally digging this new area! More than anything, I love the play of light in darkness, and I cannot wait to explore this landscape on my own. I expect to wear my screenshot key out pretty darn quickly! Any tentacle-lovers may just want to be sure there is plenty of space on their hard drive cleared for the amount of shots they will be taking.  I am thinking of sponsoring a nice little ToT selfie contest once the expansion goes live.

If you do plan on diving head-first into the new content as soon as it goes live, you might want to make sure you’ve got a plan set for launch day. First: Do you have it off? If you have extra vacation days laying around, why not use one now instead of on a holiday? The chances of others asking for the same day are slim (unless you work with a bunch of other EQII addicts). If you can’t get it off, just be sure your preferred method of transportation is in working order to get you home as soon as possible. Renting a helicopter may not be too bad of an idea here.

Once that is all settled, have you cleared your calendar of any other interruptions? Now is not a good time for an anniversary dinner to pop up! Then all you need to do is stock up on snacks, make sure you have plenty of fluids within reach, and maybe even turn off your phone. Finally, sacrifice to the internet gods that you stay connected and then enjoy exploring the new lands. Hopefully I will see you there!