END_OF_DOCUMENT_TOKEN_TO_BE_REPLACED
By now, everyone who was in early access for Knights of the Fallen Empire has played through the story at least once. If not, what are you waiting for? Don’t you know how amazing it is? But I was highly surprised at how much there was to do beyond the main storyline. Star Wars: The Old Republic started to feel like an MMO again to me, which was the exact opposite of what I expected given the single-player nature of the primary content.

This week, I will be giving you my impressions again of the expansion, but this time, I’m not going to avoid spoilers. There are many things that I like and dislike about the expansion. There are items that BioWare could have improved on, and there are some that it truly knocked out of the park. Be warned: I will not put any spoiler tags on anything after the cut. Just assume that everything is a spoiler, and read this next week when you’ve played all the way through. However, if you’ve not picked up the game and need more convincing, then read on. I might not be able to sway you one way or the other, but at least you will have a better idea of what this expansion really has in store.

Despite the main story being about eight different classes, the one constant is the Sith Emperor, whom we come to know as Vitiate. In my estimation, the whole Old Republic story created by BioWare is really about Vitiate. He was never mentioned by name in the original Knights of the Old Republic, but we later find out that Revan fled to uncharted space to track him down. We know that the two parallel stories in SWTOR, the Jedi Knight and the Sith Warrior, focused on Vitiate or characters with direct ties to him. Even the Shadow of Revan expansion was all about him; Revan was just the catalyst.

It should be no surprise that KOTFE centers on Vitiate as well. It’s not exactly explained how Vitiate come to possess Valkorion; in fact, it’s kind of suggested that Vitiate and Valkorion were always the same person. Darth Marr says, “Your constant silence throughout our history… this was your distraction?” Valkorion replies, “This was my focus.” This suggests that Valkorion is his true self and that the Sith Emperor was actually an alter ego. But clearly we know that’s not the case since the Sith Emperor existed before Valkorion, or it was suggested that he did.

But that’s not exactly my issue with Valkorion.

Valkorion is different from the Emperor. The Emperor lusted for power and wished to consume all he touched. In fact, the dream sequence you have at the beginning of Shadow of Revan seems to suggest that that was exactly what he was going to do. In chapter 2 of Knights of the Fallen Empire, we really get to know Valkorion as a person, and he seems different. In fact, one of the dialogue choices at the very beginning of that chapter is, “You’ve changed.” I’m not suggesting that a character cannot change over time, but it appeared to be an overnight change. Actually, the timeline suggests that the Sith Emperor who consumed all of Ziost and the benevolent ruler of Zakuul existed at the same time in the same person. Even now, after admittedly loving the new expansion, I have a hard time swallowing that Valkorion and Vitiate are the same person. 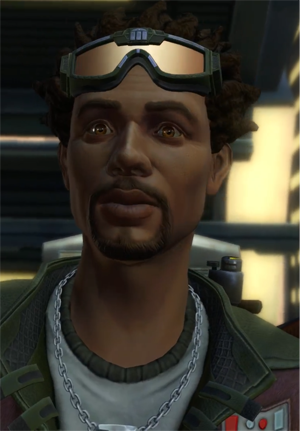 I mentioned in my other impressions piece that the story, overall, is a lot stronger than the vanilla version of the game. It really takes me back to the original feeling I had playing Knights of the Old Republic. Of course, remember that KOTOR launched in 2003. I expect more from a game (or expansion) that launches 12 years later. At the same time, I want the story to be of the same caliber.

In KOTFE, your companion quests are directly integrated with main storyline. For instance, in my first playthrough, Koth Votena really disliked my character and walked away in the final cutscene. He wasn’t removed as my companion, but it’s clear that he will eventually leave. But during my next playthrough, it’s clear that he was a romance option. I didn’t have to do any extra quests to gain his affection. I just had to follow the primary questline.

On a similar note, the cutscenes themselves have improved tremendously and so has the writing. By far, my favorite scene that I believe exemplifies this change in cinematic style is the montage in Chapter 4 when Koth and crew are repairing the Gravestone starship and HK-55 is clearing the site of critters. The scene shifts the story’s gears from the brooding dark story about death and destruction into one about a group of people who are enjoying what they are doing despite the grave circumstances that surround them. I’m reminded heavily of the Scooby Gang from Buffy the Vampire Slayer or even the original Scooby-Doo Gang without the predictable unmasking of the villain at the end. 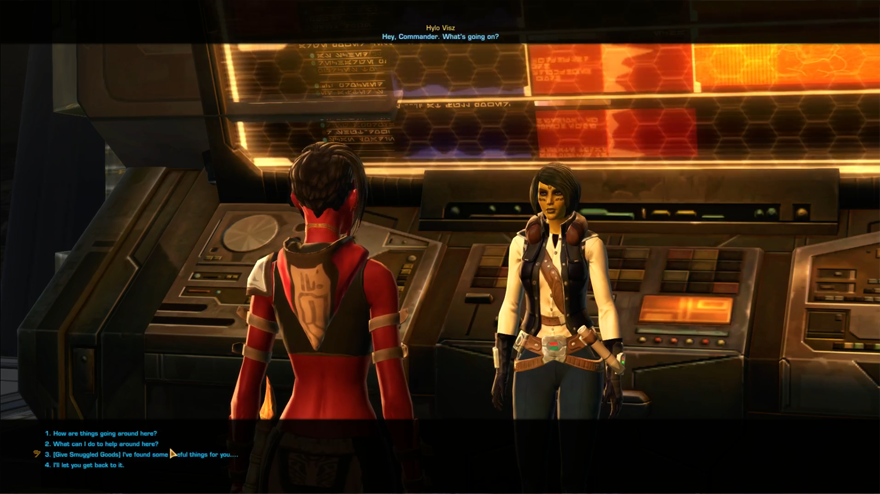 Running out of budget

As much as I loved the cutscenes during the main storyline, I disliked the cutscenes at the end of chapter nine. I hate them, actually. It says to me that BioWare ran out of budget or became really lazy in its presentation. During these scenes, a black bar appears on the top and the bottom of the screen. The NPC dialogue appears at the top, although they are voiced. Your dialogue choices appear at the bottom in a KOTOR-style presentation without being voiced.

BioWare will likely explain that the devs chose this kind of format to harken back to the KOTOR gameplay. And I would quickly call bull on that. I cannot express how jarring it is to play the last eight or so hours with beautifully rendered and fully voiced cutscenes to suddenly be thrust into these scene that are little more than talking-heads with only one of those heads talking. Your character is completely silent the whole time. 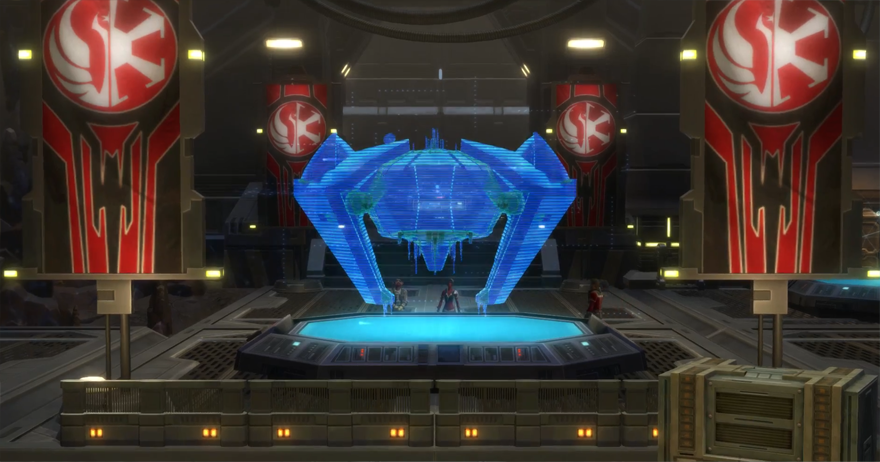 However, the big thing I am most excited about is the Alliance System. I felt that I really couldn’t talk about his system prior to the official launch because the lead up to it is full of spoilers. At the end of the chapter eight, you are tasked with creating an alliance of prominent figures in both the Sith Empire and the Galactic Republic. Darth Acina, who has named herself Empress of the Sith Empire, and Chancellor Saresh, who remains in power over the Republic despite not holding official office, are far too busy fighting each other to effectively organize a revolt against the Eternal Empire. But you, as the Outlander and hero of the Galactic Civil War, have the influence to gather up many different allies to the cause, including some of your former crew members. As a Sith Warrior, I was able to recruit Lieutenant Pierce, but I also recruited the Sith Inquisitor companions Talos Drellik and Xalek after running a short quest for them.

I also gained companions by destroying Star Fortresses. These bits of content clearly deserve their own article, so I will talk about them next week’s article. However, if you want a taste of my opinion, I talk about them briefly in on Massively OP’s podcast this week (it’ll be live later today), but the system is a bit complex and ultimately rewarding. And that system mixed with level syncing old content not only relevant again but also a lot of fun.

Despite my minor misgivings about some plot issues, I have thoroughly enjoyed the content of Knights of the Fallen Empire and would recommend that anyone who has a tiny bit of appreciation for SWTOR to give it a shot. With the game expansion launching today, it will cost you only the price of one month’s subscription to try it out.