I wanted to like Rebel Galaxy more than I do. That’s not to say it’s a bad game at all; on the contrary it fills the mission of this column rather nicely, which is to provide me with a temporary escape from the maddening MMO genre as I continue my neverending and seemingly futile quest for an adequate Star Wars Galaxies replacement.

Rebel Galaxy just isn’t the game that it could be, at least in my opinion.

Let’s back up for a moment. Rebel Galaxy is a single-player action space combat and trading thing, brought to you by Travis Baldree and Erich Schaefer, otherwise known as the blokes who founded Runic and made the Torchlight games. Here they’re operating under the Double Damage moniker, but the gameplay will feel exceedingly familiar to those of you who have strolled through both Torchlight and even Diablo/Diablo II, on which Schaefer served as lead designer and claimed a co-creator credit.

Instead of grim fantasy dungeon crawls, Rebel Galaxy invites you to crawl through the vastness of interstellar space as presented in a procedurally generated game world that’s unique to each player. Your avatar is your ship, much as in spacefaring MMO stalwart EVE Online. Unlike EVE Online, this game has less focus on strategic ship-fitting and winning battles during the pre-planning phases and more of an emphasis on pew pew.

You do get to play around with turret upgrades, different kinds of shields, and random bits of assorted equipment like larger cargo holds, tractor beams, and so on. But there’s less of that sort of thing than I expected, at least after 10-plus hours of game time.

The game’s most satisfying moments undoubtedly occur as you’re swinging your lumbering behemoth of a battleship around to bring your broadside boomsticks to bear on pesky pirate galleons and their swarms of gnat fighter escorts. Sometimes these guys drop ship parts, sometimes it’s minerals, and sometimes it’s nothing at all, but it’s always fun to blast them to smithereens and enjoy Rebel Galaxy’s workmanlike aesthetic.

The visuals won’t be wowing anyone who’s played Star Citizen lately, but the art design is a pleasing mixture of color splashes and Firefly/Empire Strikes Back used starship ambiance. While we’re talking Firefly, Baldree and Schaefer are obviously fans because the game’s trailers and story campaign are nothing if not gamified outtakes from the gone-but-not-forgotten space cowboy series, and the soundtrack is similarly heavy on slide guitars and bluesy frontier rock that makes you want to say things like “I reckon” or even “I’ll be in my bunk.”

Sadly, I got tired of Rebel Galaxy far sooner than I got tired of Firefly (the latter of which hasn’t happened yet, even 13 years later). Yes, you can technically make your own gameplay by going off the story-driven path and engaging in piracy, trading, mercenary missions, or some combination of all three. And you can of course spend hours building your bankroll and buying bigger and better ship hulls.

But there’s a sameness to it all that started to grate on me after the five-hour mark, despite the large game spaces and the eye (and ear) candy. Perhaps it’s the lack of other players and the dynamic that they would bring to what feels like a poor man’s Elite: Dangerous without the cockpits. Or perhaps it’s the odd 2-D gameplay that prevents you from moving your ship along the Z-axis and instead forces you to steer around the galaxy like you’re some sort of far future race car driver instead of a proper spacecraft pilot. 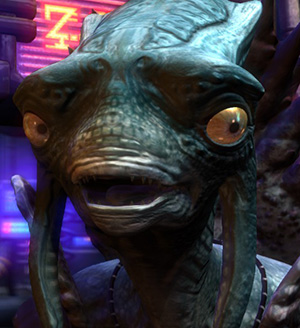 The controls can be a bit wonky, too. I tried both my Xbox 360 PC gamepad and my typical keyboard/mouse setup. I ended up going with the latter, which puts me in the minority according to the people I know who play the game and according to several recommendations I’ve seen in guides and the like. Either way, most of the ships feel slushy, and the camera could use a tweak or two. More than one dogfight lasted longer than it should have because I was simultaneously fighting with my mouse in order to get the view just right.

It didn’t much matter, though, because I never seemed to be in much danger. I did die a couple of times early on, but after I geared up a bit I came back and polished off my adversaries with ease. It also helps that you can take control of individual weapon banks whenever you want, and when you’re manning the side guns for example, the AI is manning your top turret or whatever. If you can master that as well as maneuver your boat away from the line of fire before your shield indicators deplete, you’ll have little trouble surviving in Rebel Galaxy. 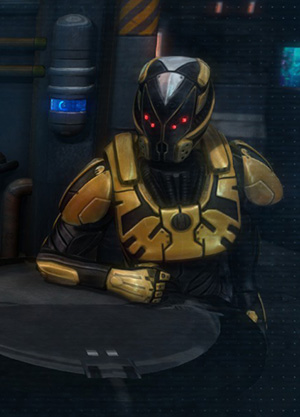 Let me jump back to some of the positives here, as I hesitate to give the impression of a game with nothing to offer. Rebel Galaxy’s story is a fun bit of distraction, and it surprised me to see fantasically rendered and fully-voiced NPCs with dialogue featuring alien languages and some gnarly non-human smugglers, traders, and thieves.

I enjoyed the trading gameplay quite a bit too, particularly the fact that the local station markets fluctuate, and sometimes the commodity prices will go up or down based on your actions in terms of completing local missions, hunting pirates, etc.

Finally, I spent a bit of time mining, as I’m wont to do in every space game that allows it. Oh, and the ability to set custom music paths and make use of the tunes on your local PC is a nice touch, though personally the space rockabilly never got old.

Ultimately and as I said in the intro, Rebel Galaxy is a decent little time-waster. I guess I expect something grander and deeper from a space game, though, and perhaps Double Damage will get around to that via updates or even Rebel Galaxy 2.