How is transmogrifying items going to change with World of Warcraft‘s Legion expansion? What are the restrictions on transmogrifying artifacts? How do the artifacts work? What changes are being brought to abilities in order to balance PvP with a new progression system? What sort of crazy tech is involved in making all zones scale to your level? What rewards will we have access to with the new challenge keystones? Can we queue for them properly? Does the Grand Magistrix have power over time?

These questions and more are what we go into this BlizzCon panel with. What we will take away from it, hopefully, are an array of answers and fine details so that we can step into the fast-approaching beta with knowledge rather than dumbfounded stares. So jump on into the comments to take part in our liveblogging once again as we find out how World of Warcraft‘s new systems will work. You can also check below for a recap of what’s happened.

And we’re off! All times are in EST:

Craig Amai uses the Deadwind Harvester, an Affliction Warlock soul-stealing weapon, as an example. At the start, you get together with the Council of the Black Harvest and open a portal to the Legion’s base in the Nether. That’s how you find out about the artifact, you follow the Dark Riders from Duskwood to Karazhan, you enter the catacombs beneath the tower, and you confront the head of the Dark Riders. Artifact power earned from quest bosses, rare spawns, rare drops, dungeon and raid bosses, battlegrounds and arenas. 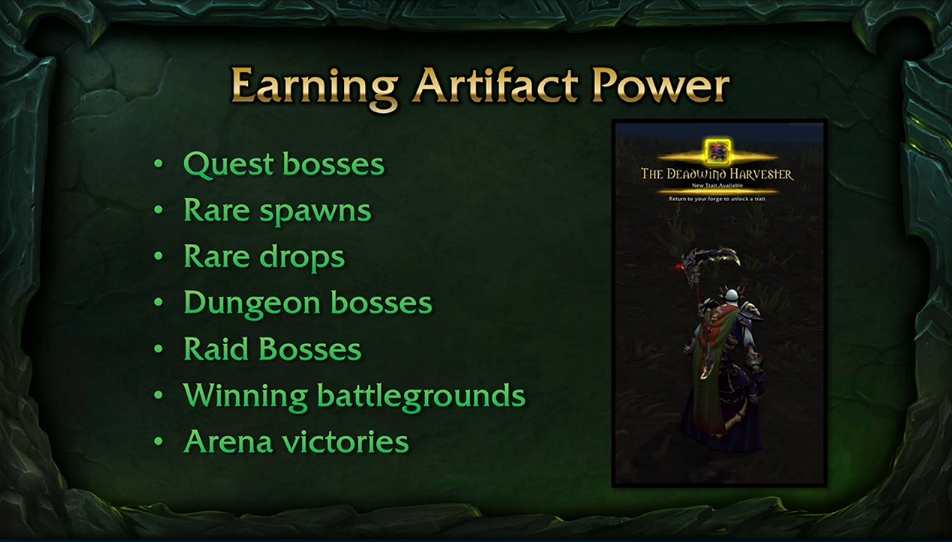 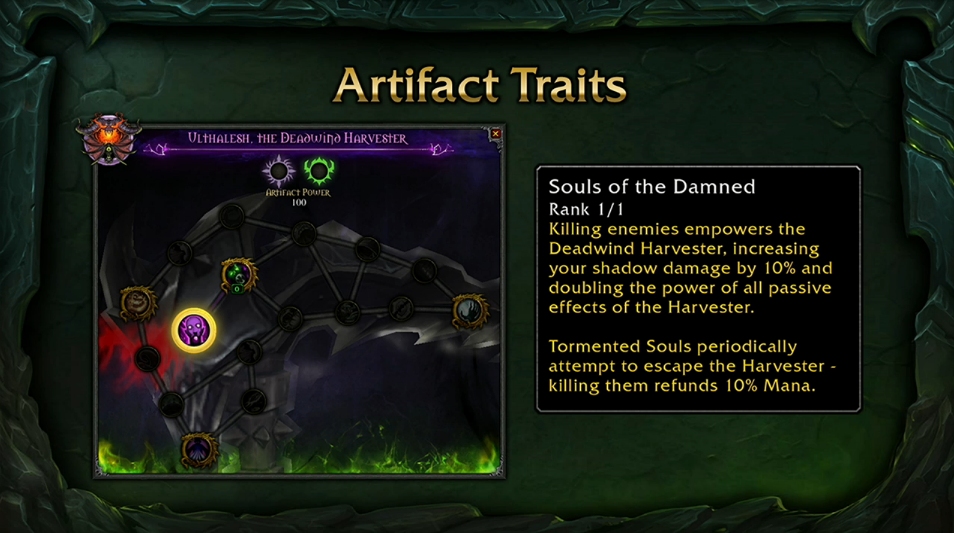 The first thing you unlock is an active trait. Active traits are basically new abilities. Unlocks are functionally akin to talent choices from olden days; you unlock traits and progress to special abilities based on what you want. Major Traits modify or add on to very big abilities. You can unlock every ability.

4:07 – Relics. Relics can be socketed into the weapon to increase its stats and also give you bonus ranks in certain traits. Allows you to focus on things like burst damage, survivability, single-target damage, etc. Can even improve major traits. Many different types of relics – for example, Fire and Holy relics on Ashbringer, Fel and Shadow on Deadwind Harvester. Upgrading your artifact allows you to unlock an additional relic slot and unlock an upgraded model as well. More questlines give you access to more models for your weapon. Many different colors can be unlocked for various models, unlocked akin to achievements. 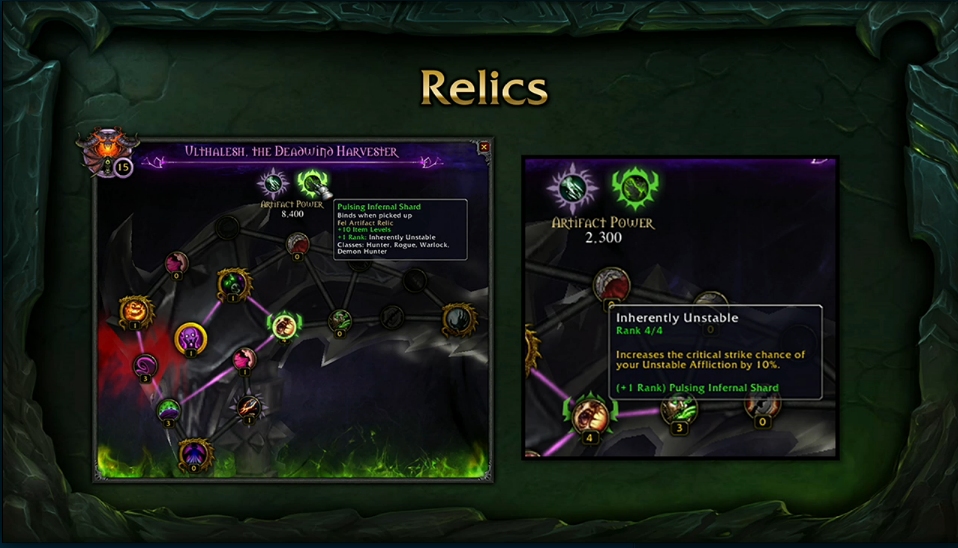 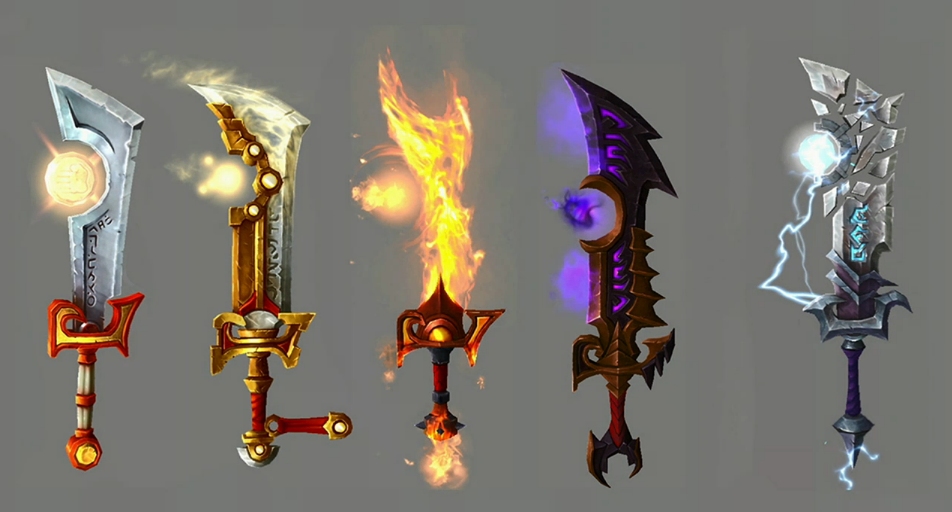 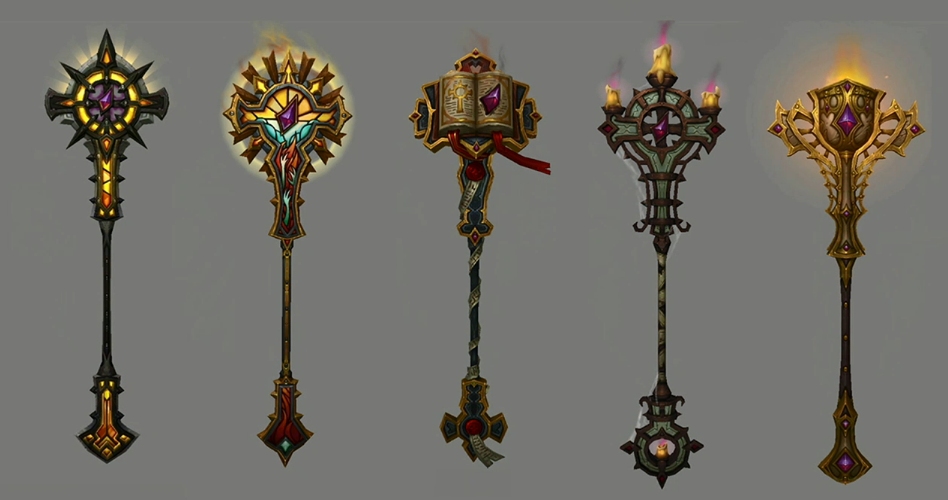 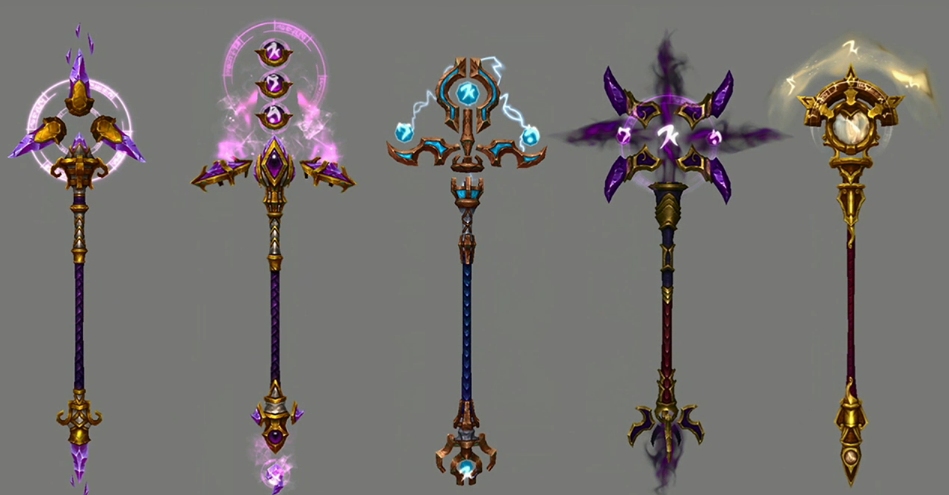 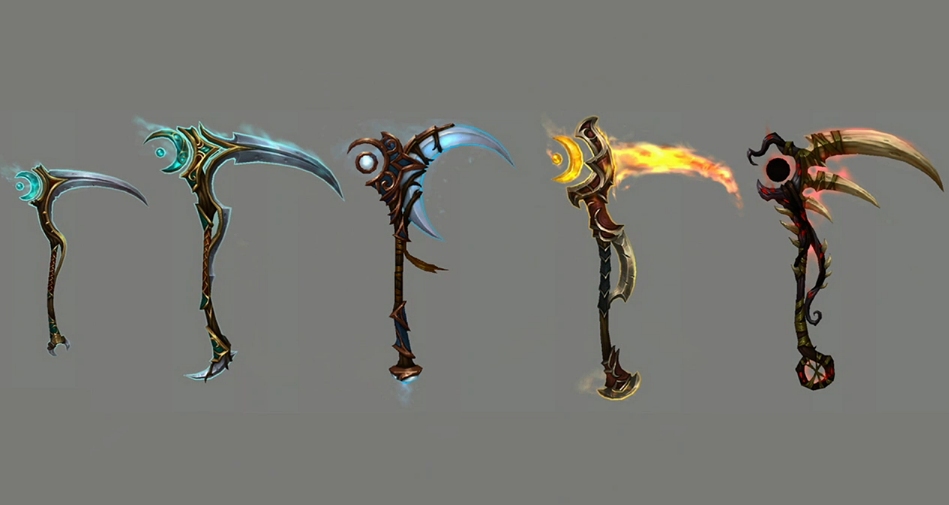 4:12 – Class halls! We’re going to see the Druid one. Class Halls were meant to strongly represent the class, welcome the greatest variety of members, and be dedicated to stopping the Legion. Some warriors are berserkers, some warriors are knights, some warriors are veterans – all should feel at home in class order hall. Since Val’sharah is the origin of druidism, the Druids get the Dreamgrove, a place where the fabric of the Emerald Dream intersects with Azeroth. Features within the halls – empower your artifact there. Shaman is clearly near the Maelstrom. Class champions will be there – big and well-known names, like Lady Liadrin for Paladins. Champions will unfold their stories and be more active than followers. Scouting map will be regular – you will be unlocking content there. Class content will be present – major artifact lines, flavorful things like demon hunting, pickpocketing, etc. Class features and bonuses in the halls – armor stands to show off previous tier sets. Hunters have a lodge with giant eagles that let them have a special flight network. Druids have access to a dram-based teleportation. Warriors have a sparring arena. Two social hubs – class halls, and Dalaran.

4:21 – Jonathan LeCraft is up next to talk Demon Hunters. 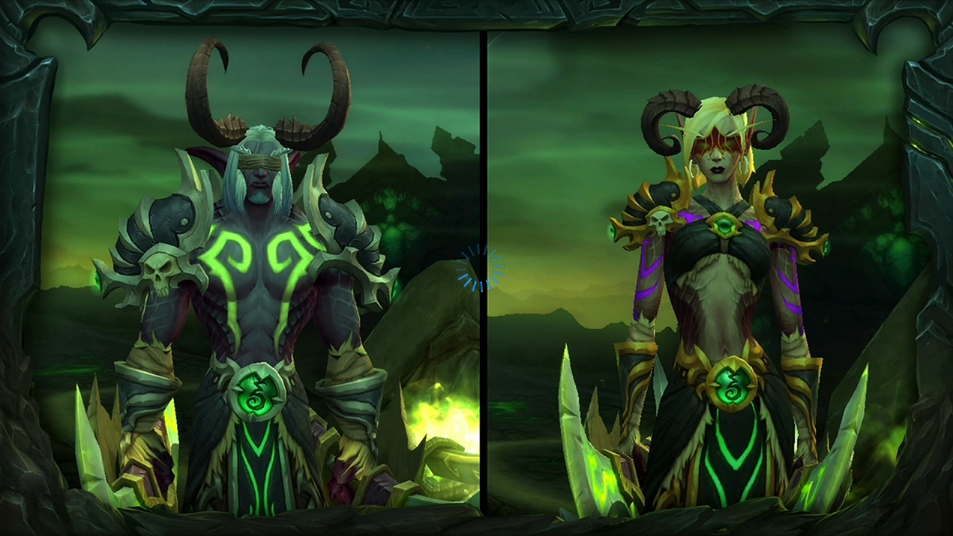 Havoc is the melee spec – fight fire with (fel) fire.

4:30 – Vengeance, the tanking spec, is about protection and inflicting pain; it’s still in development. 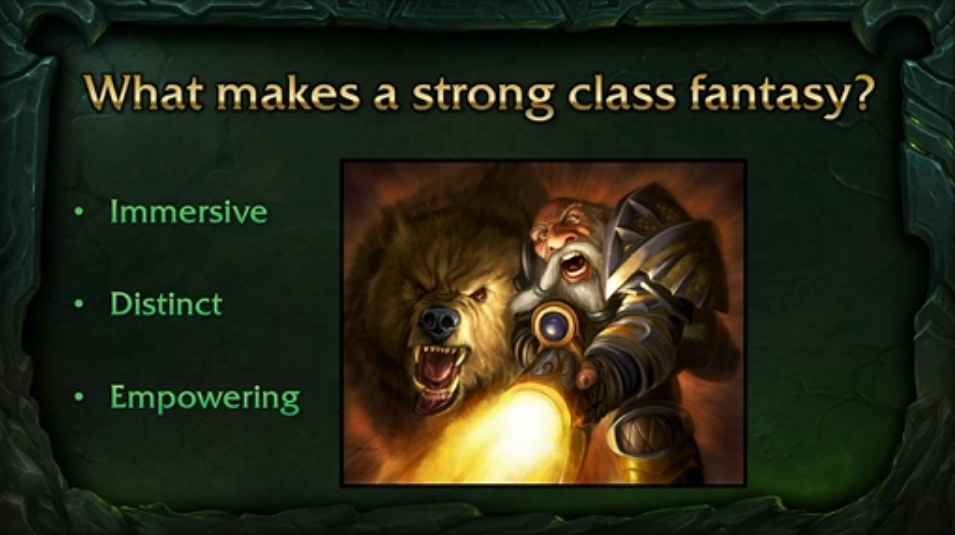 4:42 – Profession time. Gone are the days where you click on a trainer and learn all of your recipes; you want to go out and further explore/acquire. 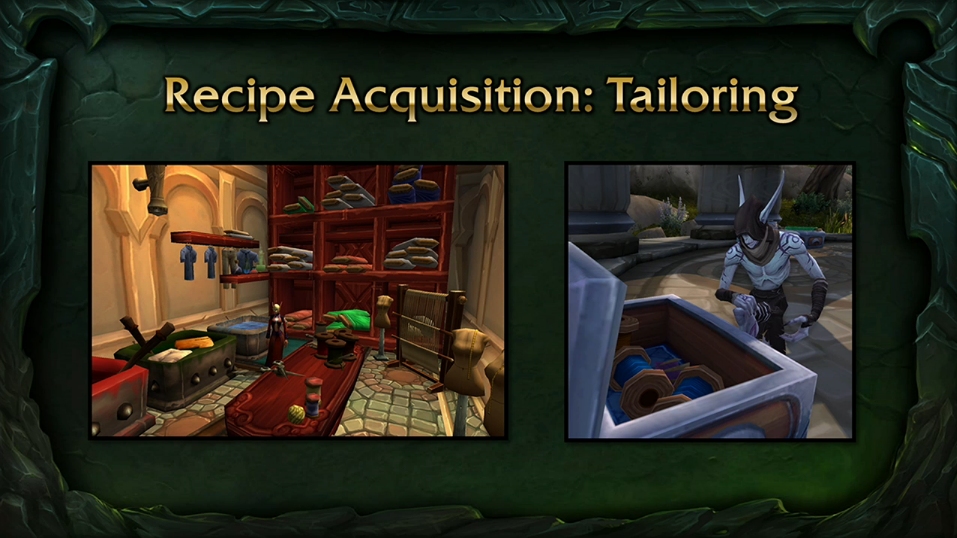 Tailors go to the trainer, go down to the world, and start to find how to sew with this new cloth. Gatherers get love as well. Gathering nodes are now shared; shades of GW2/FFXIV. Recipe Ranks are now introduced. Make you more efficient when you get higher-rank recipes. Tradeskill UI is improved. 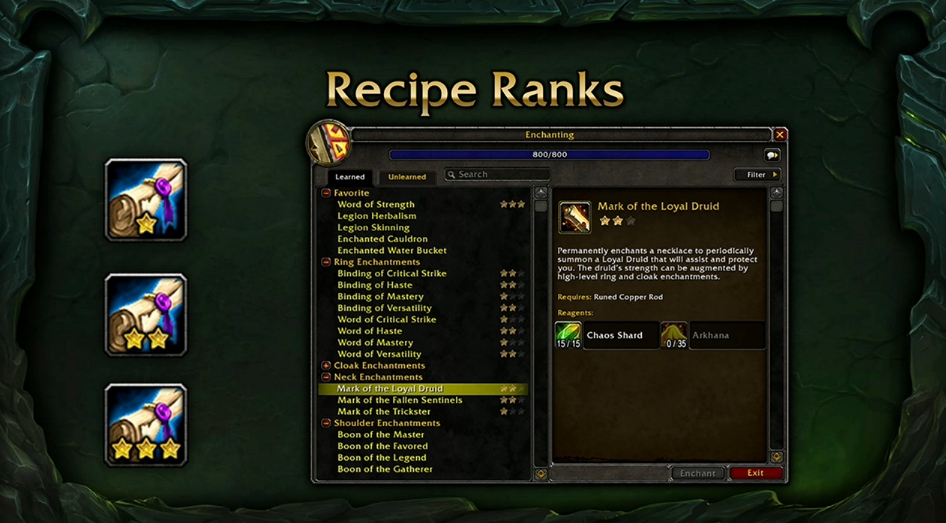 Unlearned tab will tell you where the recipes are that you don’t yet know. Profession cap looks to be 800. Obliterum is a demon ash that increases the power of your crafted items. Obliterum is obtained by destroying other crafted items, building up the ones you already have crafted. 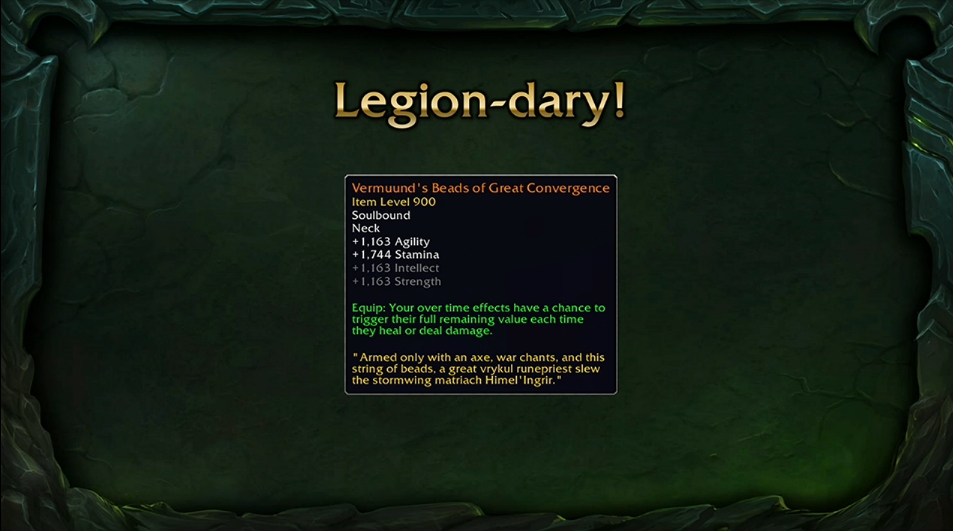 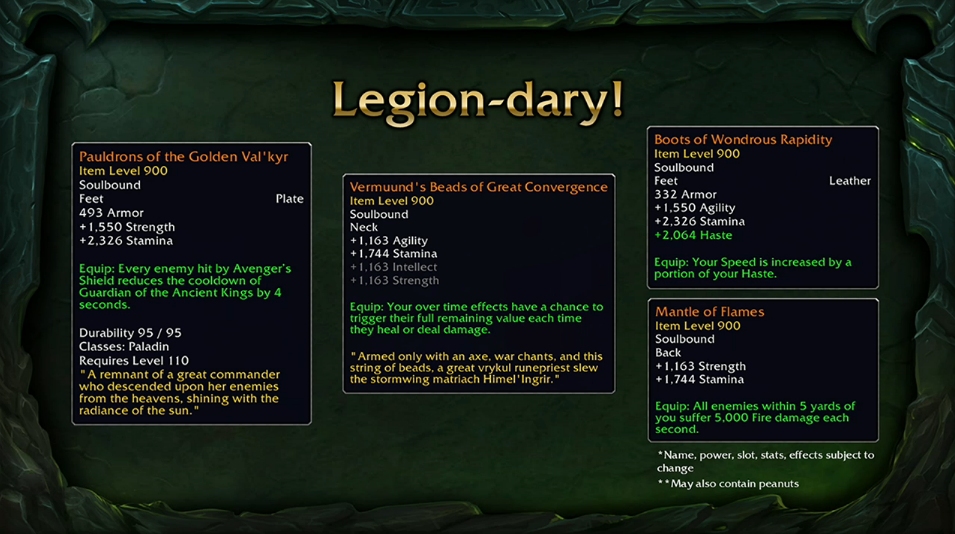 Blizz wants to go back to rare world drops with power relevant throughout the expansion. Unique effects, like increasing your speed, blocked attacks generating rage, damage instant killing things, stuff like that. They’ll be rare, but not fully random – there are ways to find and target specific items. All legion can drop with an increased item level. Duplicate personal loot can now be traded.

4:57 – Transmog time. Goals in legion – get items in bank and inventory out, expand options, and collect. Wardrobe Collection. Item bound to you, the appearance is unlocked and you can toss the item. Wardrobe is account-wide. Have to be able to equip it to unlock it. New UI: 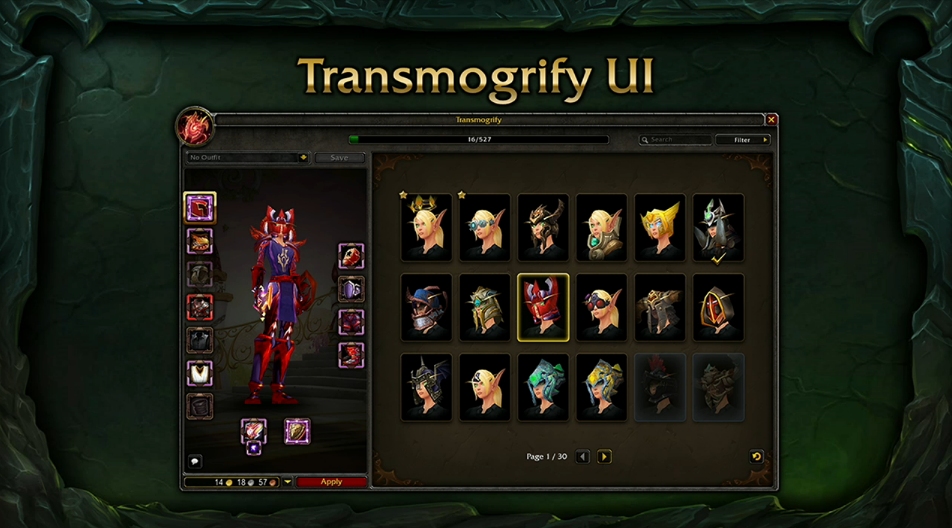 Outfits are being added to transmog. Can link outfits to other people. All item appearances in bank, void, and inventory are automatically unlocked. All items you WOULD have unlocked from every quest you have ever completed, including items you may not have even chosen. Save different looks per specialization. “Hidden” slots now saved per outfit. You can now hide shoulders. Three new transmoggable slots – weapon enchants, shirts, tabards.

Okay, this looks awesome, the transmog, if I am reading it correctly, will read all my stashed tabards and make them available and I can free up that bag space? PLEASE be right!

Now, if they would have a “make into a toy” option for some of the niftier trinket drops, I would love it.  I’m talking the ones that summon things that are amusing and help you fight — remove the stats and the ‘help you fight’ option and make it a toy so I can bring out those silly gnomes or bunch of wolf puppies, etc.  And find some way to retro it in case I deleted it out of my bags finally to save space.  I never needed the trinket, but I loved the fun factor — this would be best of both worlds – it drops as something useable in case you need the gear, and you can change it to a toy if you don’t and still have the fun and unique component of it.

Eliot_Lefebvre Why have you posted 5000 times on this thread?

LusitanGaming Not sure that’s correct. I got the impression that the artifact traits are something where you choose which order to spend points on them, but ultimately, once you have earned enough artifact power, you will have them all. Which would make them more similar to Diablo 3’s Paragon abilities than anything else.

Relics sound more like fancy gems than talent trees. I’m guessing you’ll have a small number of sockets and choose among the relics that you have managed to obtain.

Transmog looks awesome and I’m glad that artifacts will be transmog-able as well. I for one don’t want to the the 500000th ret pally wielding ashbringer.

Also, really like the level scaling. I can’t count the number of times that a friend and I start out questing together in a zone but one of us gets ahead and then we’re soloing again. We’ll see how that works out.

Also, tri-spec is going to nice.

JudgeDavid101 yeah its a bout time now they just need to remove stupid restrictions on it for some items. I want to look the way i look.

I was most impressed with the new transmog system the most.

so let me get this straight, cause this is pretty obvious, Artifacts and Relics are basically A REMODEL of the old talent trees, that they removed a few xpac back cause its was an archaic system

The hype is real!

Thank you for the coverage guys <3