Well, folks, we’re officially living in a post-BlizzCon world. Until the next one. The point is, we’re done with that convention, and all that’s left is considering what is coming next for World of Warcraft and how close we got to all of the various elements that I said we really needed to come out of the convention. So how did Blizzard do?

Pretty well, actually. If you missed the four liveblogs I did and didn’t see my reactions in real-time, I suppose that’s news. (The Grand Magistrix has power over time.)

As with any convention, there was good and bad. Now that we’ve all had a few days to digest the information that’s come out of the weekend festivities, it’s a good time to examine the systems that were announced, the order of the presentation, and how well the job of managing expectations while building hype has been achieved. It’s not perfect, and it’s too early to call it even a return to form, but this far nothing has knocked my cautious optimism off the rails, so that’s something.

One thing that I can’t ultimately be hard enough on Blizzard about is how the panels were divided. I loved the amount of art on display on Friday’s Legion panel, but during that and the frontloaded lore discussions I found myself wondering when they were going to get to the fireworks factory. The actual content of both Legion panels was solid, but the ordering was kind of baffling.

Seriously, come on to the stage and start with the bomb about zone order, then let us gawk at pretty zone artwork and lore for a little while.

That being said, I can see on some level how the thought was to keep people hyped for the second day of the convention. But it was still a bit off-message and it kind of tamped down enthusiasm, and at least right now, players need, need, need to be so hyped that no one can stand it. Not the best choice the company has made. Let’s move on.

I’ve said, previously, that we have a sequel to Wrath of the Lich King. It’s just a different game run by a different company. Seriously, I can draw a direct line between the endgame of Wrath and the endgame of Final Fantasy XIV, with an even greater emphasis on the idea that you have your rewards over here, you have your methods of earning rewards over there, and you can use any combination from there to get to here that you find fun. An open structure like that is a very, very good thing, letting players tackle content the way that they find fun.

WoW has not been good about that in recent years. But – and this is a notable but – what we’re seeing in the early part of previews right now is some hints of things that I find quite interesting, a sort of alternate evolution that’s come to much the same point but through different methods.

The idea of having scaling events roaming the world that show up and offer a variety of things to do rather than a simple set of pass/fail mechanics a la FFXIV‘s FATEs or Guild Wars 2‘s events makes me happy. I like the idea that content is based on doing things for a given faction within a zone and picking out which of several potential objectives you can tackle. It’s a derivation of some of the Warlords of Draenor endgame aspects, and they’re good core conceits.

Challenge Modes also look good except for the small caveat that, at least right now, you can’t queue up for them. This strikes me as an oversight, tying the non-raid content to the same basic flow of raiding (get a group together and hammer against this challenge reliably). I don’t think it’s an insurmountable issue, though, and I don’t think it’s something that cannot be addressed in beta testing. The core conceit of it – making more challenging and variable dungeons that stay relevant – is partly a cop-out from making new dungeons, but it also creates a lot of opportunities for fun stuff.

I’m not saying everything is perfect, and stuff like the Challenge Mode issues needs to be addressed further (in other columns than this; we’ve got time). But boy, this looks like an interesting model for the game moving forward. If we can dial back some of the randomness and how iconic gear is presented (another topic for further columns), there’s plenty of space to make this new take on systems really sing.

One of the biggest things that dampened my enthusiasm here was the idea that right now, the team is thinking of Artifacts as a just-for-this-expansion feature. Because really, this is something that could become a central part of the game for years. But then, it still could.

What we’ve seen of Artifacts is a really, really cool core system that gives players enough options to feel fun without becoming cumbersome or overpowered. I’ve always loved the weird on-hit effects that older weapons have, and it seems like the Artifacts in general are built around the idea of opening different ways of doing things. Proc effects, visual displays, unusual mechanics, lots of space to customize a given spec.

I’m hoping that the next expansion after this makes the system even more interactive by giving us more artifacts and letting us choose between them. In an ideal world, our choice of artifact weapons would come down to what amounts to a new talent choice, a way of differentiating even two characters with the same talents and specs. Nor has this been ruled out yet, although nothing being said makes me think that it’s terribly likely. It’s still a beautiful dream. 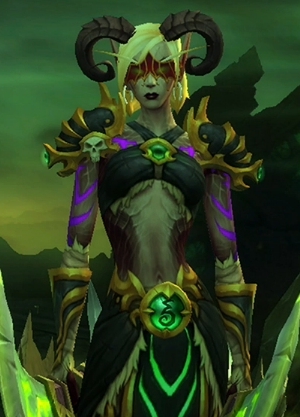 Look, I can’t emphasize this enough: The changes to transmogrification are great. Yes, it’s stealing the wardrobe system found in several other games. I don’t care in the least because those systems should be stolen. The net effect is nothing but positive. I cannot wait to have access to all of the different dress-up options that go along with this, and it makes playing the game feel so much more rewarding.

Beta when? Release when?

If there was a single big ball-dropping moment from the whole convention, yes, this was it. Another year-long content gap after what I’m increasingly in favor of labeling as the game’s worst expansion is a really bad idea, and that’s all but confirmed. Worse yet, we still don’t even know when the beta is starting up beyond “soon.” Neither of these elements are positive, and both blunt the hype pretty severely.

The bright spots are the fact that we will probably get the pre-expansion patch a fair bit sooner with all of the new systems in place, that early access to Demon Hunters, and the revised specs. Speaking of those revised specs…

Well, that’s something for next week, isn’t it? Until then, you can leave comments down below or send feedback along to eliot@massivelyop.com. You know how we do it.

LordSolarMacharius Karl_Hungus Well of it like Heroes of the Storm & Starcraft they were one & now seperate. It can be done the same way with WoW.
Merge the 2 groups together for expansion than seperate for patches.

quixadhal Polyanna
…there’s a lot peeps that don’t like my species. :(

Polyanna Just be thankful you didn’t ask for “Gnome Punters”…

Aside from my passionate fight to free fist weapons up to be included into the other one-handed-weapons category, all I really have to add here is that it will be the height of ridiculousness if artifacts are dropped after legion.  I am not expecting them to be, but they’d need to follow up with something pretty bloody amazing to justify everyone going from “ultimate weapons for the hero of our order” to “green sword of the bear.”

ManastuUtakata BrotherMaynard ManastuUtakata Did you actually click her? She has a dialogue window with the sentence ‘Whatcha lookin’ at?’ :)

Ironwu No, we won’t see that actually, since Blizzard does not report subscriber numbers anymore :)

Karl_Hungus There’s also a rumor I heard that they sort of merged the development teams of Diablo and WoW to save money which would explain why we’re seeing some “Diabloification” coming to WoW in Legion. I don’t know how true that is, but I can see it.

How about they make some quality of life improvements to the game now? There are a few really easy ones I can think of, like allowing us to purchase expansions to our fleet and follower maximum limit. It’s silly that you can have almost 200 followers with an Inn but can only have 25 active at once. Seeing as they already limit the number of available missions at any time, what’s the harm?

ManastuUtakata BrotherMaynard I am beyond excited for this! Won’t sub til Legion, but I am thrilled by this news and barring any unforeseen major missteps, this will get me to sub again.

Elder Scrolls Online drops a new companions trailer ahead of next...