Following my playtest of Guild Wars 2’s raiding, which I chronicled earlier today, I had the opportunity to fire some quick questions across to Guild Wars 2 Associate Game Director Steven Waller, and I think it helps explain the inspiration and reasoning behind the new endgame content direction that’s come along with Heart of Thorns. Read on!

Massively Overpowered: Tell me a little about the inspiration for that first raid tier, whether or not you looked at other raids to get a sense of what you desired, and whether you looked at community feedback to solidify your concept.

Steven Waller: What we normally start with is something that could fanatically connect to our game’s lore so that it feels like you’re more connected overall with the Guild Wars 2 universe. In terms of the individual encounters, basically we have a lot of people who play a lot of other games and raid in other games and things like that.

We are generally aware of mechanics that are used in other games, but Guild Wars 2 is very unique. In particular, we have a pretty strong action-oriented combat system. We have our customisation and dynamic events systems so we were really looking for things that were going to play on our strengths. The ability to dodge and the ability to heal yourself, things like that.

We just started by brainstorming around the overall lore that seemed interesting to us and we then got with the raid team and started brainstorming about what the different encounters might be and we came up with a mix of bosses. You didn’t see it all here, but there’s a wide variety to the bosses, including the first boss we showed during the beta test and the one you just played. All of us came together to really make the encounters and raiding experience in Guild Wars 2 unique.

Why raids, and why now specifically? What makes the expansion the correct environment for you to introduce raiding?

Guild Wars 2 is quite late to the raiding game, and some might say that raiding isn’t en vogue anymore. Tell me what your raids bring to the genre and raiding specifically.

There’s no loot stealing in our game, there is no gear grind, and once you defeat an encounter you’re not going to find it trivial for you to defeat them in the future. We don’t have specific professions that are locked into being only able to do one thing. That speaks highly to our build customisation system. While we do focus on having inbuilt roles and we believe they’re important part of what the encounter is about, we are not actively telling people how they have to fill that role.

While we do focus on having inbuilt roles and we believe they’re important part of what the encounter is about, we are not actively telling people how they have to fill that role. -Steven Waller

I think another unique thing is that combat is very action-oriented, which is one of the strongest suits to Guild Wars 2 in general. Raids highlight a lot of the best parts of our game, whether it is the combat, the build customisation, our dynamic events system, or the fact that we have a great community which means we won’t have people fighting over loot, that we are not about making your gear irrelevant after something has been out for a few months or a year. It’ll be fun for people to go after the legendary armour as well, which is just a nice goal for people on top of the fact that the encounters are pretty darn fun to begin with!

Speaking of the fun encounters, the raiding environments and the mechanics employed are just gorgeous! Tell me a little bit about how you worked to tie those mechanics to the environment to makes raids such a fun challenge.

Yeah, that’s something we always look at, whether it’s raids or any other encounters we do in other parts of the game. You can have unique, interesting mechanics, but they just fit better, feel better, and work better when they are tied to the themes that are in play. There’s that synergy that comes from the understanding of why things are happening rather than just “oh, things are happening”. 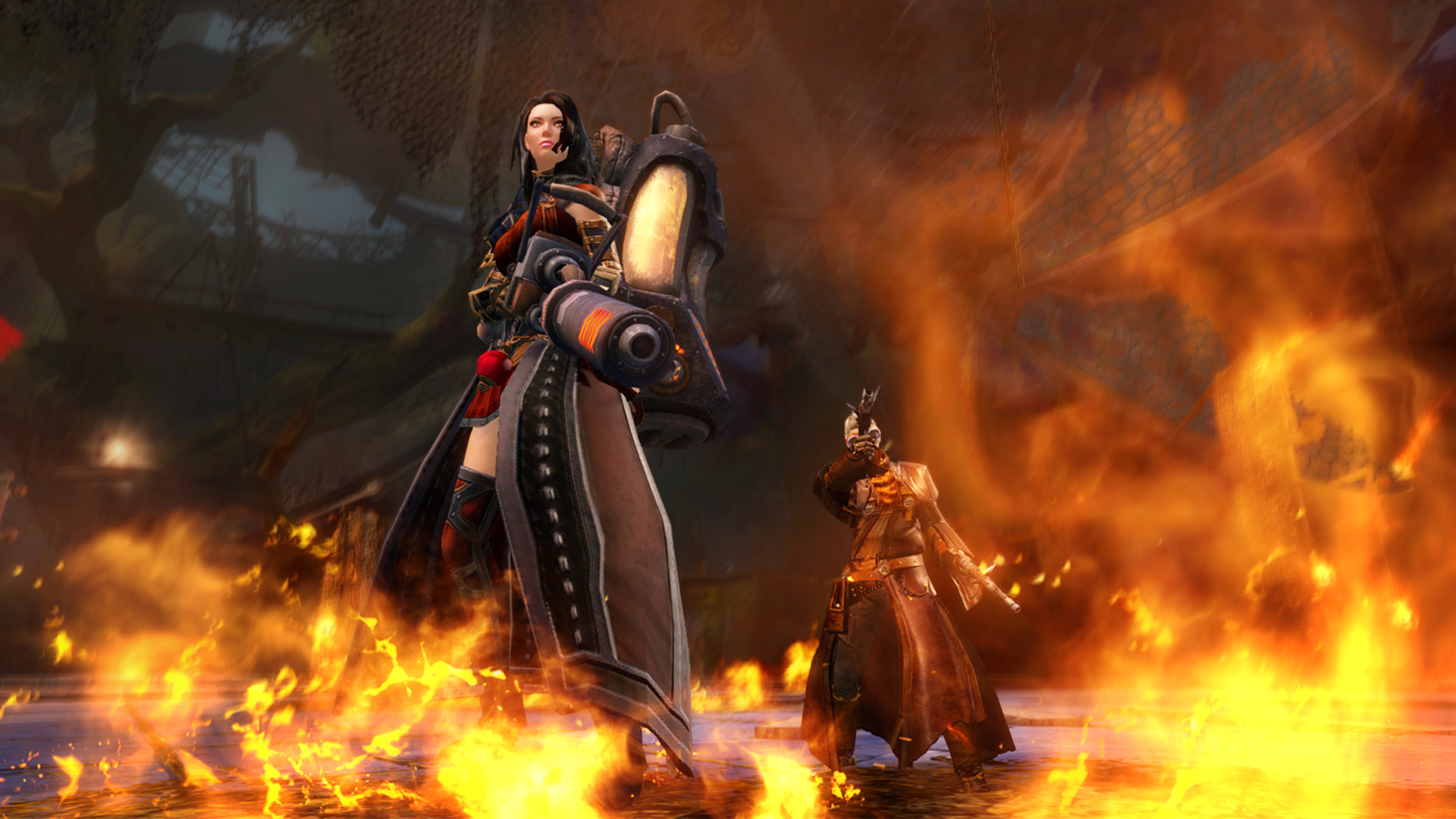 What’s the best advice you’d give to new raiders who have maybe only played Guild Wars 2 and have never looked at raiding in MMOs before and are unsure how to approach the new endgame content?

The best thing to do is to get together with a group of people that are going to be committed to working on getting better together. Find people who are likeminded with you such as friends, family, or your guild, or maybe join in with a guild if you haven’t already because that is a core MMO experience. Raids are about coordination and communication: Gear comes into play to a certain extent, but what we found time and time again is that it’s really about how well you coordinate with your team, how well you communicate with your team, and how good you are at helping each other with adjusting builds and your overall team composition.

Raids are about coordination and communication: Gear comes into play to a certain extent, but what we found time and time again is that it’s really about how well you coordinate with your team. -Steven Waller

Don’t give up! It’s fun to work with other people towards a goal. Having a challenge and finally overcoming it is a really great feeling. My number one piece of advice would be to get hooked up with people that are interested in working at raids at the pace you want to, whether it be a little more casual or more hardcore. Work with a group that will be committed to spending time on it, or get out there and meet new people and form a guild or make new friends if you don’t already have a guild that you’re involved with. You need to form those links to be a successful raider.

Some people are still confused about the whole holy trinity or not holy trinity thing, so it would be great if you could just explain for the MOP audience how exactly combat roles work in raids without being tied to the trinity.

I think it comes down to our build customisation system: For instance, in the encounter you just took part in there is definitely the opportunity for someone to draw aggro on the boss, but it’s not tied to a specific profession. It’s instead tied to the amount of Toughness you have and obviously anyone can put on Nomad or Knight gear — or something along those lines — to really take over that role and draw aggro in the fight. Similarly, people can spec to do more DPS, more conditions, more breaks, or they can strip boons… whatever it may be, we have a variety of different roles that people can take on in terms of their build. It’s not that we are tying them to specific professions, we are just saying this is what someone in the group needs to do. How the group determines who they want to do that is up to them.

What is your favourite mechanic that you can talk about before the raid launch?

My favourite mechanic that we can talk about…..you know, I really like that bloom effect that takes place in the fight you just took part in. It really sets up that moment of impending doom where you have that sense of wanting to stay on the platform as long as you can to really get that damage in without waiting too long and dying. Maybe you got caught out of position and you’re realising that you’ve got to cross all the way over to the other side and get to the place where the wall is broken down.

Thank you very much to ArenaNet, and specifically Steven Waller, for answering my questions and facilitating the playtest. And don’t forget to check out my preview and video of my hands-on experience!