It is definitely no secret that I like The Secret  World. I mean, I really like it. OK, so I adore it in a hug it, and love it, and squeeze it, and call it George kind of way. Personally, I just find there are many things to like about it (and have said as much in plenty of Chaos Theory columns and Stream Team episodes). But today isn’t about my esteem for the conspiracy-filled, horror-laden title. On this day of Thanksgiving, I want to reflect on why I am thankful for TSW. It’s more than just liking the game, it’s really appreciating what the game does for me and what it means in a grander scale.

During my reflection, one surprising fact stood out. One reason some games are forever etched deeply in my heart is the fact that I met very dear friends there who became a major part of my life. These are people who are involved in my offline life, and I love them each very much. It happened (more than once) in my all-time favorite game, Star Wars Galaxies, as well as the title that brought me here, Aion. To a lesser degree, other games have folks whose lives I’ve been a part of enough to worry about them when they disappear for too long, like EverQuest II. But I do not have any ties like that in The Secret World. That isn’t to say there aren’t great people there (please see reason #7), it just means what I have to be thankful for is more about the game itself than any specific relationship I formed in it. Here’s a list of six reasons why I am grateful for the TSW.

Of any MMO I have ever played, The Secret World gets top award for storytelling. I am not talking about just the main story line either; pretty much every single mission out there has some degree of story woven into it or some flavor that spices up the world. Unlike some other games, TSW doesn’t make me feel as if missions are busywork to be endured on the way to the ultimate prize. The story is the ultimate prize here! I want to go out and find every single side mission because missing even one might deprive me of some juicy tidbit of lore. Even the lore is chock-full of story.

As someone whose greatest pleasures in life include experiencing a great story, I appreciate this focus on superb storytelling. The importance of the story shows in the careful crafting of the cutscenes and in the casting of the voice actors (who seriously enhance the story). And I needn’t worry that the story will take a back burner to other features: Lead Designer Romain Amiel announced point-blank to players, “The story always has to come first.” I appreciate even more that I can experience much of the story alongside a friend; I know there are many single-layer games out there with amazing stories, but I get the most pleasure out of sharing the experience.

Along those lines, I simply am grateful for the chance I have to go and experience a MMO that dares to be different. I am so thankful for devs willing to stick their necks out and break the sci-fi and fantasy mold in order to give folks something else. It isn’t that I don’t like sci-fi and fantasy; I do. The mere fact that those genres are so over-represented makes TSW such a breath of fresh air. More than that, as a major horror fan I am not sure I can adequately convey my appreciation for having my favorite setting available in a MMO. The fact that the game delves into psychological darkness is definitely a bonus for this lover of psychology! 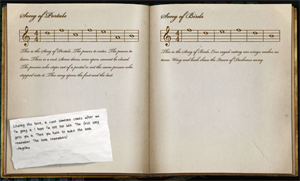 This isn’t what you think. Yes, there are definitely zombies in the game (especially on Solomon Island), but here I am referring to players’ brains — more specifically, using them. TSW is also different in that it supplies a whole new dimension to the MMO experience that previously has been focused mainly on combat and crafting. I dare say nearly everyone wants to find a game that fits them, but as much as I enjoy MMOs, none ever really catered to my strengths and interests. Then along comes TSW with all these investigation missions with puzzles to solve. Some folks get a rush when they down a massive raid boss. Me? I get all giddy when I suss out the answer to a riddle. It is really nice to feel your playstyle is being catered to, and in TSW mine is.

As much as I love TSW, I love even more that it doesn’t make me feel guilty when I don’t play it constantly. When you have a life on top of a job that necessitates playing other games, that’s a pretty big thing! The icon isn’t sitting on my desktop giving me the evil eye every time I start the computer but don’t log in. The fact that I don’t feel pressured to play even when I really can’t in order to keep up with the Joneses is something I am extremely grateful for. The Secret World can be played, a story finished up, and then left until the next story comes along or I have more time. I honestly do not feel as if there is a carrot constantly dangling in front of me just out of reach, taunting me that I am missing out and will never fully enjoy the game until I get it. Instead, I get to enjoy the game as I go regardless of how much time I can put into it. I am not here because I have to be; I am there because I want to be. In my mind, that is a huge distinction.

This may seem like such a silly thing, but the fact that I am not forced to be just another carbon-copied, faceless drone in the crowd is another fact I am grateful for. From what build and skills I use to what clothing I wear, I get to be an individual. it is important for em to be my unique self. I even have tons of options to display my personality. Related to that, I also appreciate that I am not vaunted over everyone else in game, as the only hope or the one true hero to save the day.  Instead, I am valuable just for being myself, and can make a difference by being me. there’s a really awesome feeling in that.

There’s no shortage of opinions that gaming studios are money-grubbing monsters out to bleed customers dry. These views are pretty rampant, no matter who the companies are, which is why I think it is important to balance those (sometimes extremely justified) views with the good they do. And why I appreciate the devs that work on TSW all the more. Here are folks who through The Extra Life initiative supported its community as it supported charity. Sure, maybe advertising the streamers wasn’t a huge undertaking, but even simple gestures can mean a lot.

Beyond that, I have talked with a number of devs there personally. These devs do care about their product and they care about their community. They show excitement when people experience their game. They cheer when folks solve puzzles or accomplish some other feat. These devs are the kind of people I’d love to just chat with. They interact with the community because they want to, not because they have to make appearances. I appreciate that these devs have heart: When devs truly care about what they are doing, it will (and does) show in their work, and I am the beneficiary of that when I get to experience the end product.

Speaking of community, this is another thing I am thankful for. Even though I have not met a soul mate or life-long, real-world friend in The Secret World, it isn’t for any lack of great people there. In fact, TSW has what I think is one of best communities of any MMO, if not the best. It could be just because the type of game it is (see all above reasons) attracted this crowd. Whatever the reason, this is a group that spends time actively helping out others through creating and supporting chat channels and resources for new players, helps one another during events, and generally speaks respectfully (compared to any other world chat I’ve seen!). One player made a special Agatha taxi for players that was so helpful during Halloween event, and others would instantly assist when calls were put out for help. I myself have been the recipient of many a meet-up that got me where I needed to go quickly, and I also offered to let others meet up on me. Just watching people pull together and help one another out is awesome, and I am so grateful for the environment that fosters that kind of camaraderie. It truly helps restore my faith in gaming humanity after having to deal with so many other toxic communities.