Raptr recently released its most played games list for October 2015. MMOish titles featured heavily in the list, with Star Wars: The Old Republic posting big gains and World of Warcraft maintaining a comfortable position in the top five. Guild Wars 2 climbed by 10.87% over the previous month, securing the 12th spot in the rankings, while Final Fantasy XIV dropped five spots and 24.31% of monthly game time.

MMO-likes ARK: Survival Evolved and Warframe are also present and accounted for, while MOBAs Dota 2 and League of Legends continued their world domination.

As always, the stats represent only users of the Raptr service, and percentage playtime is calculated relative to other games, so it is possible for a game to sink in relative rankings while actually improving in overall playtime/players/income/health (and vice versa). Raptr does not provide complete information on games’ total playtime except for the tidbits it mentions in the body of the article. 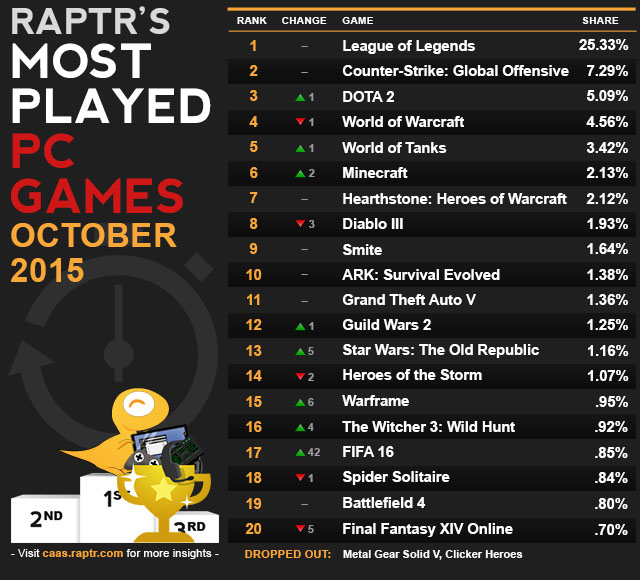 BryanCole
Dota 2 is a mindless gamae with zero depth.
What if I tell you that Dota 2 has more depth than most MMORPG(and surely including FF XIV) have and will ever have?

SwobyJ BryanCole Ugh, good point, didn’t realize that till now.  I stand corrected.  However..why I am I reading about October stats on December 8.  At this point who gives a crap?

So, Raptr.  Let’s set aside that for a long time it was bundled with ATI/AMD video cards.  Or that Nvidia has a version of this as well which is rarely reported on as a credible source.  Why is this relevant?  How about we get a real polling service to actual take a poll on a monthly basis?  That would be news and much more relevant.

BryanCole **OCTOBER**. Not November. None of these released in October!!

CistaCista Maybe not MMO as we understand it mostly today, but I’m open to a partial-MMO genre of, for JUST an example, MP VR RPG gaming years from now, with a breakout hit for its time (2020s where MMOs were 2000s and MOBAs 2010s). Just an example – not wanting to get into a VR debate.

Siphaed Rozyn I certainly will be after this GPU dies on me (any time now).

I find it sad or maybe amusing that the top 3 are mindless games that have zero depth.  On top of that, NONE of the top game releases in the past 2 months are even in the list which is bs, everyone I know and have read about across the internet at various gaming sites is playing either Fallout 4, CoD:BoP3, or Star Wars Battlefront.  I haven’t used Raptr myself in 2 years and don’t plan to ever again.

Armsbend paragonlostinspace Yeah I finally gave up on ATI, the AMD buyout wasn’t good for that gpu in the long run. :( Was a die hard fan for about a decade too. Just too many issues and the software sucks plus. :(

DasBenty sydh learning that made me forget how to wear pants.