I’ve had some time to think about Blade & Soul, and I’m still not sure exactly what I want to say about it. I enjoyed my time in the beta, yes. There are some kind of big outstanding issues that are definitely not going to be changed for launch, partly because they’re part of the very nature of the game, yes. There’s stuff to consider about the game, definitely. Is it everything it’s been hyped up to be… well, there’s the rub, isn’t it?

As with any title that released and then went without localization for an extended period of time, there’s a certain degree of mystique swirling about Blade & Soul simply because it was heretofore unseen. It was a mystery. It could take on whatever properties you wanted as you viewed it from afar. Now that it’s actually coming here, all of that speculation collapses into now. So it’s a bit of a thorny bush to untangle: I’ll do my best to present my thoughts in an entertaining manner and you can follow along to draw your own conclusions. 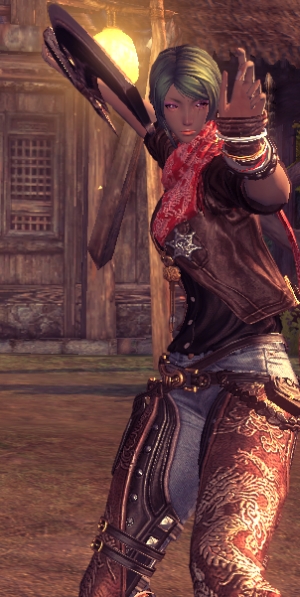 On the bright side, there are enough sliders in place that after a great deal of work I was able to create characters who looked like they could actually have internal organs and had skin rather than factory-fresh plastic. Unfortunately, that did nothing about the fact that my characters had spines assembled from snakes and Silly Putty. Or the fact that pretty much every outfit included seven-inch heels and refused to allow for full chest coverage.

I could keep going on, but the point is that it’s bad. It’s the sort of thing that’s actively off-putting. It’s a shame because, on its own, the character creator offers a variety of options; while there aren’t many classes available, it means that most races have their own individual styles for things. The actual races run together a bit, but they’re partly distinguished by those classes.

After character creation, you start in with the game proper, which means starting off with story. It is not, to be fair, a bad tutorial; the game gives you an idea of how you’re expected to play right off of the bat, walking you through combat before you start actually fighting things. Its main problems are simply that it’s trying to walk you through caring about characters without giving you any reason to do so while at the same time feeling like a single-player experience.

This isn’t helped by the fact that your next character goes through the same thing, but there’s more to be said about alt issues below.

My first character was a Swordmaster, which meant that I got some tricks in combat right away. As in Skyforge, your abilities are mapped to specific keys, all of which fulfill similar functions. So the Tab key is always an area attack, 1 is a defensive move, left mouse for normal attacks, and so forth. Swordmasters start out with a right and left button attack along with a block, and playing one is all about using that block to mitigate damage.

That’s one of the nice aspects of the game in general, really: It’s not really about healing damage but avoiding it altogether. You have time to see enemies winding up their attacks, and as a Swordmaster you have to time your block so that they ping against it. That, in turn, powers up your more powerful attack, allowing for a strong sense of parry-and-riposte in combat. It’s a dance on both sides.

A bit more play unlocks more abilities, like a charge, a knockdown, and a ranged ability. While I didn’t get far enough in the beta to unlock much in the way of customization, there’s certainly plenty of it on display as you progress through the levels, allowing you to fine-tune the abilities you use most often and make them more powerful over time.

I’m not going to lie: Blocking attacks and following up with a counter was a lot of fun, and it had a satisfying feel to it. Unfortunately, by the time I logged out of the beta, it was starting to become a bit rote. Equally unfortunate is the fact that the game follows a rather relentlessly linear path as you progress through the story, clearing various sidequests and unlocking a few new features along the way.

The story is clearly rolling in gleeful cliche from the moment the game says “go,” and that’s all well and good. But it doesn’t manage to be so campy that it becomes awesome, and it doesn’t achieves “awesome” status on its own. The characters are thin pastiches of cliche without much to recommend them, but the game assumes I’ll care just the same. I don’t hate them, but I don’t care about them either. 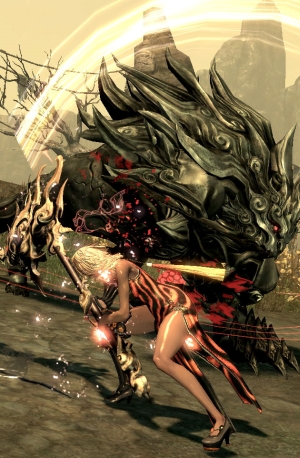 Starting a Destroyer to see what a second character was like wasn’t the most edifying experience, either. Destroyers, apparently, don’t get their defensive trick for a while, meaning that you start off with nothing but attacks. This is fine as far as it goes, but it does mean that the central fun of combat was replaced by a straight damage race. Moreover, I should note that founder pack items apparently may be given to only one character that you create, so players will wish to choose carefully… and the novelty of that intro sequence is lost very quickly.

“So it’s all bad?” Well, no. The thing is that the combat, when it’s working, is really fun. There are a lot of other elements that I like, such as upgrading weapons (although the weapon upgrade process seems to suggest that it’s going to require a lot of catalysts, which rather dampens my enthusiasm). You have a lot of cosmetic outfits to choose between, and giving items new appearances is fairly straightforward. All of those are aspects I like quite a bit.

If anything, my criticisms come down to execution rather than concept. There are a lot of different costumes for your character, yet all of them still include some variety of heels and chest exposure for women. The item upgrades could be lots of fun, but there’s lots of fiddliness associated with them. The zones look lovely, but they’re rather rigorously stuck along a line of progression.

I should note that gliding and sprinting about is incredibly fun… but it doesn’t have much application in actual exploration, which makes it lose its appeal rather early on.

It’s possible that all of this evaporates as you get to higher levels. As it stands, I’m interested enough that I want to put more time in to find out what those higher levels look like. There’s just enough pulling me forward that I want to know. But almost all of that is based upon appreciation of the game mechanics. The lore, the story, the world, even the quest design – none of those is enough to make the process more enjoyable. And that’s a shame.

Blade & Soul is not a bad game. If you’re fond of very distinct weapon-based fighting styles and its mechanical ideals, it’s going to keep your attention for a while. That game-based skeleton is excellent. But it doesn’t have much meat on its bones, and that’s pretty disappointing.