A few weeks ago we put out a call for winter and holiday-themed screenshots. Two readers responded with multiple pictures each, so today’s column is brought to you by Tyler and Stormwaltz. Take a bow, both of you!

Our headlining shot is from Tyler in World of Warcraft. “Here my monk is taking in the sights during a snowstorm in Pandaria’s Kun-Lai Summit zone,” he writes. “Whatever other problems Mists of Pandaria might have had, they sure nailed the world design.” 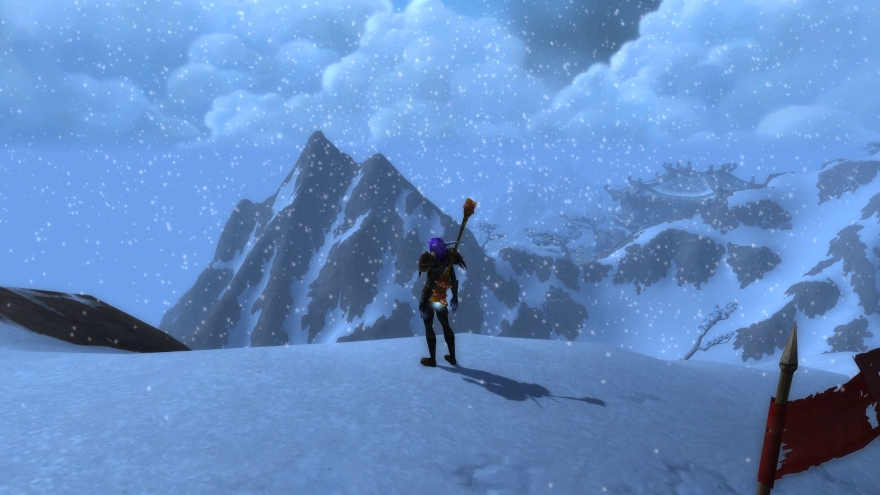 Next up is an excursion into Lord of the Rings Online and its holiday event!

Stormwaltz sets the mood: “The predawn gloom over the Middle-earth village of Winter-home is broken by the unexpected crackle of fireworks. I wish I had more screenshots of LOTRO’s Yule Festival grounds. It’s beautiful and homey.” 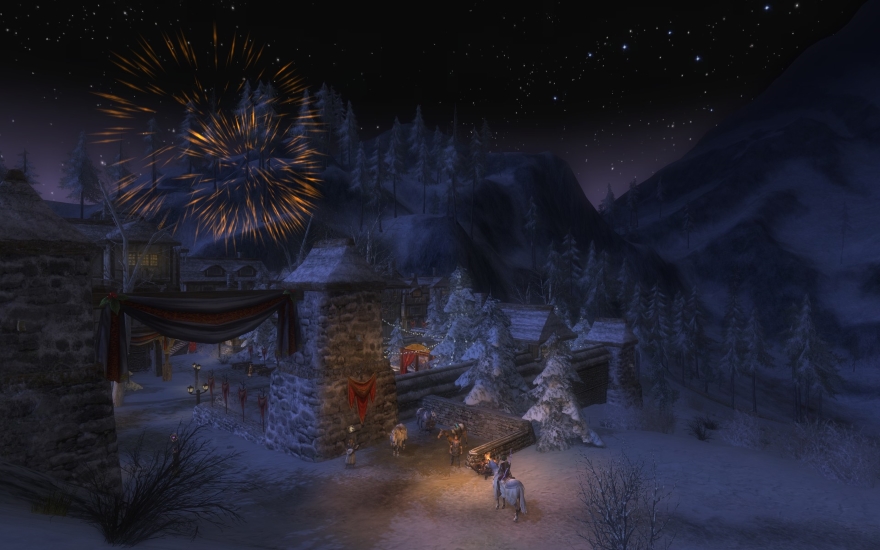 Stormwaltz continues her MMO tour with a trip into Star Wars: The Old Republic:  “Crystalline clouds wreathe Castle Panteer in the Glarus Valley of Alderaan. The forces of House Ulgo hold off Imperial and Republic aligned rival houses. Thus far it’s been a stalemate — the two factions too busy fighting each other to press back the usurpers. The Sith Lord Nuwayrah Faris breathes in the raw sharpness of the air, and descends to break the stalemate…” 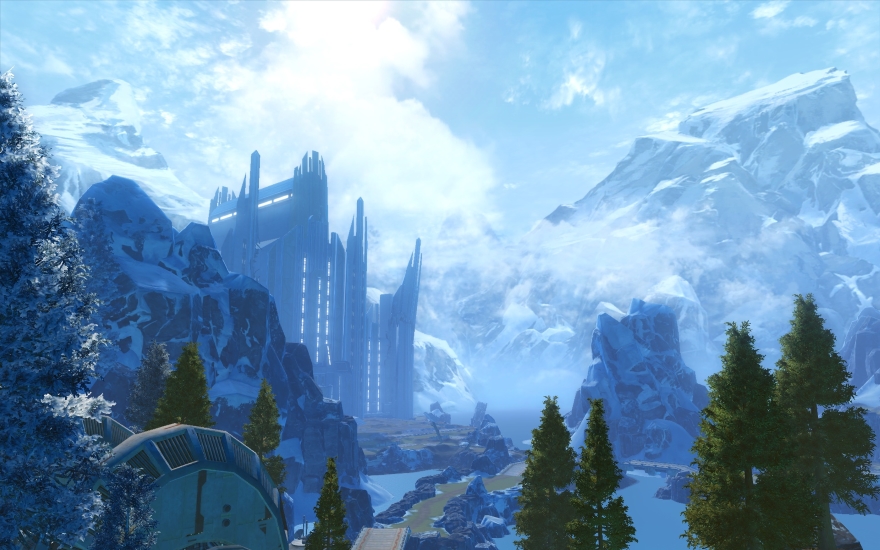 “This screenshot comes from The Secret World,” Tyler explains. “It shows my Templar getting into the holiday spirit by wearing her Dawn of a New Age Morninglight robe, which was only available from the End of Days ARG back in 2012, while posing in the Niflheim holiday dungeon.” 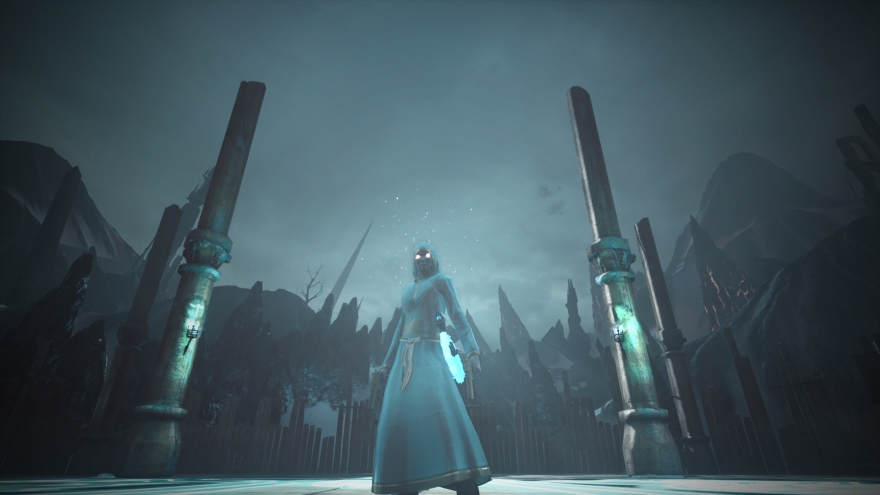 “I don’t know about you, but when I think of Star Trek, the very first thing that leaps to mind is giant snow-cones fighting giant snow-borg in a gingerbread-man village,” Stormwaltz writes. “Here Admiral Hannah Welch, in toasty holiday garb, takes part in the defense. I’m going to chalk this whole episode up to spiked eggnog and an overzealous interpretation of the Prime Directive. Fortunately, nearly anything can be excused with, ‘A wizard — er, a Q did it.'” 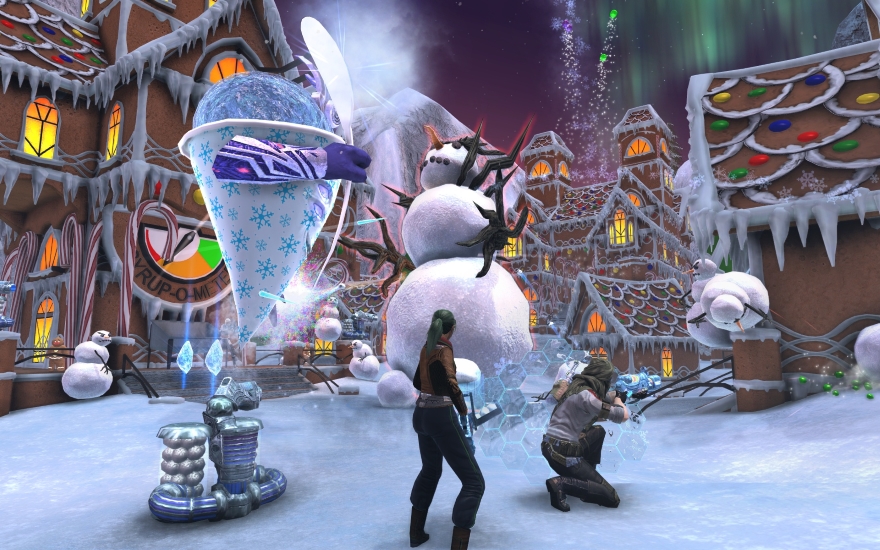 We’re getting close to the end of the year, and next week I’ll be posting my favorite six submitted screenshots from 2015. In the meantime, why don’t you send in your best shot from the year as well?

I guess no one has told Tequatl yet…

Winter’s Day Jumping puzzle kicked my ass this year. Finally got it after a few hours, had to jump for joy with the gingerbread bro’s.

Crap.  I have one more for my personal fave cap.  It was a random cap in BD beta.  Yes, the UI is visible and it serves as a reminder that this is an MMO pic.  My apologies for the spam here.

My personal fave cap of the year?  Well, not sure it is my best but I do love it as it seems to capture Knights of the Fallen Empire quite nicely.
“Where is the crappy graphics, Lana!  Where is the campy looking character models, the goofy side kicks and the sand, the damn sand!  Lana, what have you done my with my crappy Star Wars!  You have three seconds to tell me.  Three seconds, and I’m going to shoot you in the foot.”

ellapinella Wait, what? SL can look that good?

Kithred I’d like Tarken Glacier more than IPP in RIFT if it wasn’t for increasing performance issues (I’ll see how I feel after a new GPU and maybe CPU next year or so) and that it’s at least a little too wastelandy. The ‘cosmic’ theme appeals though – something I’ve been wanting more of in this game for a while.

Karl_Hungus WannaBAMBAM They’re blatantly ‘playgrounds’. Any RPing focus is only in dialogue, and there is no great immersion beyond that. Just do your damn story then leave! Sadly.

Akami I would care a lot more about BDO if the combat didn’t freak my mind out (in a bad way), yes. Beautiful, authentic looking world.. then flashy mcflashy.

Second Life with modified Windlight and camera settings. Not Photoshopped.

Xephyr I would assume so, I just don’t have one of those peripherals. Nor the money to fling around on them.
Thanks for the opinion though.
I’m so bored lately, I spent hours yesterday downloading Aion updates and Lineage II full game, then today I tried to hop on Aion and it tried to re-download all x9 download packages again and left me in a state of consternation.
I hopped on Lineage II and it seemed interesting, but it was clunky controls. (Like, I was running into invisible walls/stopping with my character at random places that shouldn’t have stopped it, and it made you do large arcs to turn around…whereas I’m used to turning on a dime and going another direction when I realize something is behind me I needed.)
So I just went through and deleted them both.

I think I may have just been spoiled by some of the more free range games I’ve played and the responsive controls and now things aren’t living up to what I want out of a game.

I was playing GTA San Andreas on PS2 recently and was pondering jumping into the online version because I’m curious what they did with allowing you to make your characters ‘me’ by wardrobe/apartments…and I’m curious if they actually made it have a point to all the money you accumulate after a certain point. (1.25 million and bought most of the properties on there, and nothing really to do with it now…since I know where to find most of the guns I enjoy and just re-stock there instead of buying them…like, what does someone buy when there isn’t anything left to do?)