We all have those things in our lives that continue to pull at us, drive us, to learn more or do more. Sometimes it turns us into an obsessed captain Ahab chasing our giant white whale until it destroys us. Other times, obsessions can turn us into an industry giant like Steve Jobs. But most of us aren’t Ahab or Jobs; we are just everyday men and women with families and careers designed to give us fulfillment in our daily lives. And behind that veil of normality, we build these shrines to something we can’t not think about.

My shrine is built to Star Wars.

This past week, I met with three other people who have built a shrine to Star Wars as well, but these gentlemen have been able to make quite a career out of their obsession with Star Wars. These guys are, of course, the leads on Star Wars: The Old Republic. I spoke to Senior Producer Bruce Maclean, Lead Creative Designer Charles Boyd (former Lead Writer), and Lead Technical Designer Michael Backus.

I thought I’d take this opportunity to talk to them about the four years of SWTOR and specifically the creation of the latest expansion Knights of the Fallen Empire. We talked about the creation process and how the game became what it is now. And we might have revealed some things that are yet to come.

The beginning of the Fallen Empire

Knights of the Fallen Empire changed many things with the core SWTOR game, but what I really wanted to know was how this particular expansion got started. The inspiration was most important to me. Boyd explained that Knights of the Fallen Empire derived much of its inspiration from a Star Wars RPG tabletop campaign created by Designer Jesse Sky many years ago. Boyd told me that many of the elements of the original campaign remain in the expansion and that most of those pulled from Sky’s love of Star Wars as a youth.

He also went on to say that it was a way to reshuffle the board and a way for old and new players to experience the game on a kind of level playing field. Many players did come back to the game and have loved it. Maclean said that much of that stems from listening to fans when the Shadow of Revan expansion came out. “The player response to Shadow of Revan was, ‘Yes! Tell me more about my story. That’s why I’m playing a BioWare game. I want that BioWare storytelling.’ And that really inspired the team.”

Backus talked about his discussions with Jesse Sky, saying that it was always about the personal story. “Between, the droids, the lightsabers, and the Force, but really what it comes down to: It’s all about relationships, and it being personal. It’s not only this huge, imposing threat that the player has to go up against, but it’s about this family and all the things that are happening and all the politics and the relationships that you’re building with them.”

Anyone who played Star Wars: The Old Republic when it launched would see a very different game if he logged in now. The whole leveling process has been streamlined and made to fit the readjusted focus on the personal story. Maclean explained:

Maclean described what he called the sweet spot by calling back the 12x XP boost. The original intent of the 12x XP, he told me, was to help get players ready for the Shadow of Revan expansion so that they could have a character that was the correct level when that expansion launched. The developers discovered as they played through the game with 12x XP that they already had that great BioWare RPG story — as long as they, Maclean put, “weren’t distracted by random side missions that [didn’t] have deep story to them.”

In the same statement, he pointed out that this was the best time to make a major change to the core game. “If we were going to make a big change to Star Wars: The Old Republic — this is the year of Star Wars — this is the year to do it. Now when you level up, it takes a fraction of the time to do it and you have an epic story guiding you the whole way.” 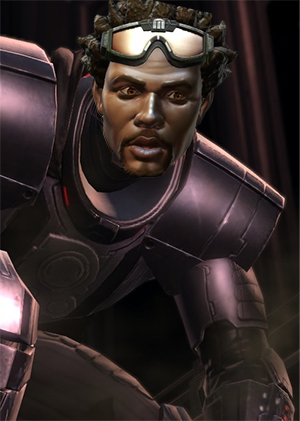 I also wanted to give the team a moment to tell us about the future of the game. Maclean told a story of BioWare’s Lucasfilm partners going to see Star Wars: The Force Awakens long before the BioWare team got to, and the Lucasfilm guys had fun with them by sending fake spoilers. So I wanted to give the BioWare team a chance to tease us in the same way. So I asked each of them to give me a fake spoiler for the upcoming chapters of Knights of the Fallen Empire. Maybe there’s a hint of truth to them, but probably not.

“You become the Emperor,” Backus proclaimed. Then Boyd popped in with two doozies: “Turns out, Koth is Malgus, and Malgus is Kephas,” and “The Gravestone can turn into a giant robot, and obviously, you can play as that robot.”

To the last “spoiler” they all said, “Don’t say that last one is fake; we might actually use that one.”

I want to give a big thank you to Michael Backus, Charles Boyd, and Bruce Maclean for talking with me. It took some adjusting to fit me into their schedule; they had to finish up a lot of work before going to see some tiny movie that came out this month. I hope to speak to them again soon, but I really want to know what you guys think in the comments. How do you feel after four years of SWTOR, and if you were going to make a fake spoiler for the next chapters of Knights of the Fallen Empire, what would it be? The next chapter, by the way, will hit servers on February 11th, 2016.