Ahh, ’tis the season: When goodies galore are hidden inside a magical closet and gigglegibber goblins give out gifts. Yes, it’s Frostfell time! And in EverQuest II, that’s quite possibly the most anticipated live event of the year. Whether you’ve been gone a while and just lured back by the or you’ve been counting down the days in Norrath since last Frostfell, there’s plenty to do during this holiday — almost too many to remember, in fact! Since the holiday’s inception in 2005, the festivities have grown with more quests, more crafting, and more items. Even the entire Winter Wonderland itself was revamped in 2013! As such, it makes perfect sense that it might be a little hard to keep track of everything. Hence this  Frostfell guide. You don’t want to miss a single thing, do you? And you’ve only got until 10:00 a.m. on January 7th, 2016 to get it all done!

Too bad for TLE

I don’t know about you, but I was really excited to see the official tweet that hinted at Frostfell activities for the TLE progression servers. I didn’t even bother to follow the link; I immediately logged in and ran to Qeynos. Boy, was I let down. It turns out that the extent of Frostfell there is three merchants around a decorated tree selling a few holiday-themed housing items and gear around a tree. The magical closets that lead to the Frostfell Wonderland Village in each major city are noticeably absent. Something is better than nothing, of course, and with any luck more of the event will be available next year. But those who really want to experience the full breadth of the holiday now have to go to the regular servers.

On that same note, anyone eager to do 2015’s newest mission chain that hasn’t bought the latest expansion will be disappointed; unless you own Terrors of Thalumbra you can’t access the quests. 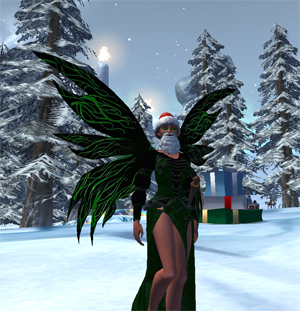 A gift a day

There are many different tradeable gifts you can get from Santa Glug, and who doesn’t like free gifts? All you need to do is visit the (fake) bearded goblin every 18 hours and pick up a new gift. (If you happen to have a lot of alts, this could take some time!) Here are 2015’s gifts:

Perhaps because the goblins have poor memories, a number of gifts from years previous are unavailable this way each new celebration; luckily some of those can be purchased on the Frostfell vendors. Giggawatt, Garsleblat Gigglegibber has many items for coin, and Gerbi Frostfoot (178, -36, -1312) has even more for the event-specific E’ci tokens, including new armor for level 100s. Be warned: Some items purchased with these tokens are not tradeable, but the tokens themselves are. To use them on alts just move them from your currency tab on your character sheet to your bags, then put in your shared bank.

The E’ci tokens can be earned either as quest rewards, by running the Icy Keep dungeon, or by trading in extra gifts obtained from the solo Raiding the Gifty Storehouse mission to Gixen on the dock in the Enchanted Lands before completing the quest. (For even more, you can keep re-entering that instance and collect gifts indefinitely until you turn the quest in).

You can also pick up snowballs from buckets and fruitcakes (only available in the zone) for free to pelt folks with year round. Now there’s a gift that keeps on giving!

Many of EQII’s holiday quests are a fun parodies of familiar stories. Most can be completed yearly, and a few can be done multiple times each year. Note: Before you can do most of the quests in the holiday zone itself you have to complete A Deepice Mystery from Jingle. All quest are located in the Frostfell Wonderland Village unless otherwise noted. To help keep track of which quests you have completed on which alt, ZAM has a handy Frostfell quest tracker you can print out. ( * indicates the quests are part of a chain tied to the one above)

Crafting all the way!

Why buy when you can make! Frostfell has three different lines of recipe books: Frostfell Outfits You Can Make, Frostfell Feasts and Decorative Crafts, and Scholarly Pursuits for a Festive Frostfell. Volume VIII is new for 2015, filled with new home, gear, and clothing items. Each recipe scroll costs less than a gold and can be bought from Giggawat and Garsleblat near the Icy Keep and Giddlenerf and Guhtosle down on the islands.

Thanks to the ownable Frostfell crafting tables introduced in 2013, Frostfell recipes can actually be made year-round. Crafters level 90+ can get these by taking the Frostfell Decoration Committee: Permafrost! quest and then buying the three keys (a cheery key for the loom, a festive key for the workbench, and a merry key for the stove and keg) from Ginneldarf Gigglegibber inside the Icy Keep crafting instance. Next, craft the keys in the Wonderland zone then head out into Norrath to find the chests that match the keys. The festive chests are found in Frostfang Sea and Darklight Wood, the cheery chests are in Antonica and Timorous Deep, and the merry chests in Greater Faydark and Commonlands.

The necessary fuels for all crafting, however, can still only be purchased at Frostfell merchants, so be sure to stock up! The crafting materials are also only available in the Frostfell Wonderland Village during the holiday and on April 1st, so players would need to gather as much as possible before the event ends. The best thing to do is buy a couple special Frostfell materials bags from the gigglegibber merchants and fill them up. A chart of which present nodes gives which materials can be found on the EQ2 wikia. 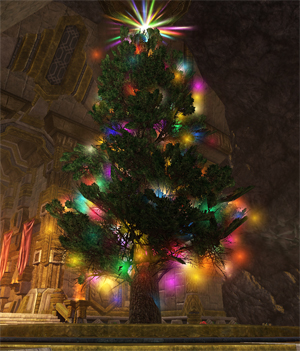 Like all live events, Frostfell has a collection of achievements to complete, two for adventuring and three for crafting. Completing the Frostfell quests grants Frostfell Fanatic! Participating in all the Candy Grab races grants Great Candy Grabber, and completing the The Great Candy (Cane) Chase in under two minutes and 45 seconds grants Frostfell Overdrive! Crafters get Frostfell Feast Delights (cooking), Handcrafted Gifts to Give (crafting gifts), and Holiday Lights (crafting lights). Check your progress by going to achievement tab of your journal (J) and selecting Frostfelll in the live events category.

If you are shiny addict in any way, don’t miss out on the event’s collection quest: Frost-bitten toes. Just remember to not try and pick any up when running Mission Improbable in the Icy Keep, as your yeti disguise will disappear and the mobs will become very angry at your intrusion!

MissingLynx I think it definitely is! It has so much you can do that it is overwhelming sometimes, but just don’t try to do it all at one time and you will be good.  Lots of helpful people too.

Thanks. I started playing MMOs around the time but never tried it before. Was mostly wondering if out was still pretty viable to start from scratch given the long legacy. I’ll be sure to download it later.

MissingLynx It is an old school game but there is a lot of content to get your teeth into and a lot of fun can had along the way.  As EBreezy mentions it is free to play so give it a go, try the various classes and see if anything sticks for you :-)

MissingLynx I’m a newbie and I’m having fun.  Can’t hurt to try it out, since its free. :)

I did NOT know they gifts where tradable. I have to dust off my 3 alts and rack up on free stuff. Thanks for the guide.

In Everquest II I mean.

Honest question, as someone whose never played before, is it still fun to become a new player in this?