When it comes to the EverQuest franchise, looking back at 2015 is a much different experience than looking back at 2014 was. That previous year ended on such a high note of hope and anticipation; players (including me) were excited about what was to come. This year, however, is closing out with an air of melancholy, apprehension, and — for some — resignation.

That’s not to say that everything has been all bad. Despite what some may have you believe, the titles haven’t been careening non-stop down the slippery slope of doom. In fact, EverQuest and EverQuest II might even be ending the year on an upswing thanks to their unexpected expansions. Unfortunately, the two newest children of the family, Landmark, and EverQuest Next, enjoy no such buoyancy in the final quarter. They have sadly faded into the shadows.

How to sum up 2015? Concern, controversy, and content come to mind.

When looking back at the past 12 months, one event overshadows it all. Pretty much everything pales next to the news; it dominated the first quarter and impacted every month after. Nothing affected the franchise as a whole — and each game individually — as did the sale of SOE and subsequent formation of the new Daybreak Game Company. As much as the studio wanted players to feel everything was  business as usual and A-OK for old and new games alike, it was understandable that players were apprehensive. Of course, the culling of the dev teams shortly thereafter did nothing to assuage fears. 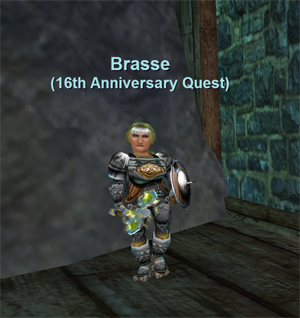 We know that awesome teams are really built from a large pool of folks, but it wasn’t just a dev here or there that got canned. It was a large chunk. And while some may disagree, there are some faces that were just pretty synonymous with the franchise, like Linda “Brasse” Carlson, Dave Georgeson, and John Smedley himself. To see those names no longer associated with the EQ games is unsettling: Carlson is working for another studio; Georgeson is collaborating on a new project with Landmark/EQN composer Jeremy Soule; and Smedley started up a new company after he left. And how things have panned out since then haven’t really helped either, but more on that below.

In June another loss was suffered, but in a different way: Actor Christopher Lee, who did voice work in EQII as the Lucan’ D’lere, passed away. In October, a new (but very familiar) name took Daybreak’s creative helm; Jens Andersen’s became executive creative director of the Daybreak portfolio.

Adding to the aura of doom and gloom, the studio made some serious changes to GMs that looked to hurt customer service and the ever-popular SOE Live was canceled. It also didn’t help that the final days of the year were spent with serious connectivity issues that even brought down OPTV’s final Frostfell stream!

If amount of news is the indicator, the bulk of Daybreak’s attention went toward the Time-Locked Expansion servers. From open beta to crashes due to popularity to competition with content to controversy when devs overrode the expansion vote, it seemed like most of the focus was on the progression servers throughout the year. Did we mention the removal of raid rotation, free transfers, and the addition of a no-boxing sever, Phinigel?

But that wasn’t really the case; EQ live servers got their share of love, too. Besides festivals (including a 16th birthday party in March), there was new content to be had. Despite April’s heralded move to twice-yearly campaign DLC, EQ did see a full expansion in November: The Broken Mirror expansion added new areas, more missions and heroic adventures, level-scaling missions, and over 15 new raids, including two additional “level agnostic” raid zones.

Unrelated to the official servers, the EQ emulator (which obtained an official written agreement with Daybreak) celebrated its sixth anniversary of providing player with the original experience.

Of course, there was a bit more controversy during the year, when the test server accidentally had cash shop items for mega-cheap and when Producer Holly Longdale made some remarks at E3 involving raiding and casuals (which some of us agreed with).

Like its older sibling, EQII also focused on progression servers, both announcing and launching in 2015. And also like EQ, the second Norrath did away with expansions in favor of DLCs (a decision that was — again mirroring EQ — repealed come fall; devs even ended the year by teasing expansion number 13).

Content-wise, EQII added the DLC Rum Cellar with its extra zones and story, new fabled dungeons, and in a very awesome surprise move, brought back the beloved starter experience, the Isle of Refuge. Of course, there was also the Terrors of Thalumbra expansion, with live events leading up to it, and then beautiful new zones, dungeons, and items galore once it launched. And who could forget the Monty Python-inspired killer bunny event?

In a category of its own is the prison server experiment that EQII implemented. Would problem players pay for the privilege of playing on an unmoderated world? We haven’t heard much about how exactly that went.

With its ups, EQII also had its down. EQII wasn’t without its own controversies. In April there was a bit of a hubub over moderation when a prominent community figure was banned from the forums. Then in May, folks who weren’t a fan of lockboxes or bind-on-pickup were certainly not enthused about the mercenary lockboxes that debuted that month. Had the mercs found within been heirloom, more players might not have minded the RNG of the boxes as they’d be able to trade them to an alt that could better utilize a particular fighting companion. Additional unhappiness came when players found out that part of the actual signature storyline in Rum Cellar could not be experienced unless players participated in the new raids. 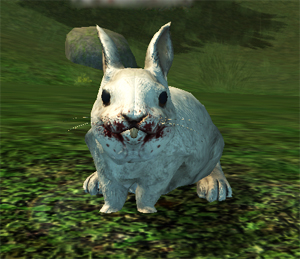 There was also some grumbling about the fact that the Isle of Refuge could only be accessed on the TLE servers by paying customers who had All-access membership. Those who had been away from the game for a while had the chance to sneak in and run through it later in the year, however, when Daybreak gifted two free weeks of All-access to certain accounts. Sadly, many folks didn’t learn about it right away as the notifications went to many a spam folder!

Though planned for the summer, the big population-enhancing server consolidations didn’t actually start until October, and then all characters received a token that offered a free server transfer in December. (The fact that you could only use the token if you had a current paid membership was initially left out.)

Life was looking pretty decent for Landmark as it celebrated its Year 0 anniversary on January 31st. (Of course, that was just days before the announcement.) At that time, new features had made it into game, including the caves, oceans, and combat, and players were eagerly looking forward to the implementation of the game master system and AI-scripting. Once the company changes happened, however, it became less a matter of when and more a matter of if these features would make it into the game in the minds of many players.

Even though some news in February seemed to take steps back, such as the loss of the Storybricks collaboration, there were updates through March and April that took the game steps forward. New landmasses and biomes, added achievements, and improved the prop pallet. Players cheered when devs announced there’d be only one more character wipe as well as when claim upkeep was abolished in favor of a time-based system. Landmark’s blueprint was overhauled in March, and things seemed hopeful after that major update in May that changed the world (literally). Half-way through the year we were still anticipating new stuff, like the upcoming dungeons.

That hope waned though when communication dried up. We got an update in June (yay for sitting!), and then next to nothing until December. We knew in June that Daybreak was shifting focus from Landmark to EverQuest Next, but no one could have anticipated that news and updates would dry up so thoroughly. It might have been tolerable, except that EQN suffered the same fate.

What can we say? Talking about what’s been going on in EQN won’t take much time because we don’t know what’s going on anymore! I still say one of the biggest blunders of this year has been the lack of information about the game; devs disappeared from Twitter, and official streams and workshops ceased. It’s like the mere mention of EverQuest Next would bring some horrific curse upon the speaker and all who heard. After getting used to all the open communication, the radio silence is more than disconcerting and lends to the feeling that no news is bad news.

Of course we expected some change when things, well, changed. The game may sport a different payment model? OK. That is giving us some info. But very little more than that came throughout the year. Not only that, but there has been quite a lack of noticeable activity as well. Although new fiction was released for the game in April, the lore and general forums were nixed in March. The last Workshop Show stream to air was September 24th, focusing on August’s Halas building competition. The rate of building competitions had already slowed significantly, with Qeynos’ in April and the Elf competition in May, and now the streams stopped as well. In September we were told that a large internal playtest happened. for EQN, yet we are still all left wondering how it went.

Although my most anticipated game for 2015 was EQN, I couldn’t make the same declaration this year. Oh how I wish I could! I still have hope, but Daybreak really needs to give us something to go on. We need sustenance to keep our hopes and dreams of this new Norrath alive. My fingers are crossed that when I look back at 2016, there won’t be space enough to write all the neat things about the game.