The dawn of a new year is a great time for many people to hit a tiny reset button on life. I’m doing that personally. In many ways 2015 was the year of Star Wars, but I’ve found that I’ve need to reset some things, one of them being the reason that I play MMOs and why I enjoy them. Readers of this column can surmise that I enjoy many aspects of MMOs, but first and foremost, I enjoy the social side of the game. That means with any aspect of the game — raiding, dungeons, instanced, or open-world PvP — I enjoy doing it with other people. That is why I find roleplay extremely important. And that’s why I’ve done a bit of refocusing on my gameplay.

Today, I want to take a moment to talk about what’s important to me in Star Wars: The Old Republic, and what I think needs to change this year. Most of the time, I’m focused on the community aspects of the game and what the community is looking for, but this right here is my personal passion. And these are the things I’d like to see BioWare focus on during this time of reevaluation.

I have been an officer in two guilds in SWTOR, and both of these guilds have had to create an external website just to communicate some of the simplest things about the guild to its members. “Well, you can just use the MOTD to let players know about an upcoming event,” I hear some imaginary person say. And you’re right, imaginary man, but you miss one of the key features of an active guild: There are events nearly every single day. In my current roleplay guild, there are so many events that if we were to just put a week’s worth of events in the message of the day, we would run out of space before we got even halfway through the week. And if we were to put in the MOTD the event happening that day, we would have to change the thing everyday and no one would be able to plan out the week. 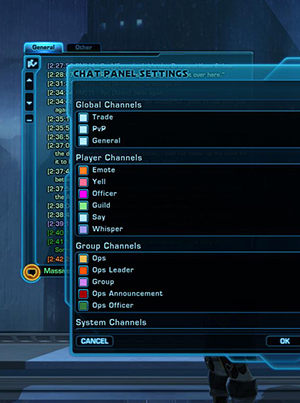 One of the oldest and still most effective chat programs is IRC. It’s so robust that Twitch still uses it for its chatrooms for each of its channels. Although I’d absolutely love to see SWTOR adopt IRC as its chat software, there are a few base-level features that SWTOR needs to add to chat client. When I say base-level, I mean features that nearly every chat software has now that for some reason SWTOR does not.

You’d think that if you created a channel on your server, you should be able to manage it in someway. Of course, there are channels that do well enough managing themselves, like the allies channel on The Ebon Hawk. But other channels that are designed for inter-guild communication or maybe in-character-versus-out-of-character communication have no way to be moderated. I have a couple of channels that I use for personal communication, and my best hope is that people don’t accidentally find it or that they leave when they no longer use it.

I’m not the best speller, and I know there are people out there who are worse than me. I hate it when I make an obvious spelling typo or if there is a word that I can’t deside if it’s d-e-c-i-d-e or d-e-s-i-d-e and I clearly choose the wrong one. A simple spell-checker in the chat client would make the world of difference to the social gamer, especially the roleplayer, who might write a long paragraph in a single post.

I didn’t play City of Heroes nearly as long as I wanted to. I had another game that might have been weighing heavy on me at the time. But I remember that you could setup a simple macro that would let those around you know that you happened to be typing. Now, I’m not asking that BioWare to allow macros in the game, but I would love to see some sort of indication that the person you’re talking to is entering text into the chat channel. We already have that silly gold chat bubble with the ellipsis that indicates that you’re in a cutscene. Why can’t we have one of those to indicate that you’re typing in the “say” channel?

I know that some of you despise the dances in SWTOR. Yes, the Gangnam Style dance was fun and hilarious in its time, admit it! However, that dance like many of the emotes in SWTOR don’t have a consistent appearance when activated. In fact, many of the dances and emotes aren’t consistent between players active in the room when the emotes happen. The most notorious for this is the /chair emote. It was amazing when it came out because it allowed anyone to emote sitting in a chair. However, it’s been one of the most annoying to use in practice because when I sit, I appear to be sitting differently on different players’ screens. BioWare, take your pick: Give us three different emotes or allow everyone to see the same version of the emote.

These next ones, I’m going to speed through because they really don’t need that much explanation, but they seriously need to be done.

At this point, we know we aren’t going to get a UI element that puts down the hood, but we do know that the hood can be turned off for every single chestpiece that has one. So a imperfect but simple fix would be to give us an item that is invisible but activates the hide-hood function, like the covert chestpiece but for the head.

Seriously, just flip that switch: Let me see what the other faction types into /e. It makes cross-faction events very difficult, and all BioWare has to do it turn the damned thing on.

Lastly, my current main roleplay character is a body-type-three male, and I can’t sit in most chairs because I can’t get close enough. I end up looking like I’m floating about two inches in front of the chair. Just change the hit-box size to be consistent with other players and we’ll be good. Thanks.

Are you an RPer? What kinds of things would you like to see? Can you believe that I didn’t say chat bubbles? Thanks for reading, and I’ll see you next week!

Karl_Hungus vicariousfan Shaddoe Lethality ehhh not really i mean Dave Filoni can’t really work on 2 series at the same time and they obviously have a timeline.

But at least we did get some of the last season and because of it Korriban and Darth Bane are now canon.

Shaddoe kailindart What I want is short and muscular.  You can be built without being six foot thirty.

kailindart I would settle for a tall, skinny body type. Tall and muscular is OK, but it’s not a good catch-all.

vicariousfan Karl_Hungus Shaddoe Lethality
The early cancellation is what got to me. They should’ve let them finish the season. Rebels could’ve waited. The Clone Wars show was the best thing about the prequels lol

crawlkill Most serious role-players just ignore the game’s story line and create their own, within the setting of the game.

We also like our pre-rendered paper dolls because they can do things other than role-play: have lightsaber fights, fly starships, destroy Rancors, group up and run warzones or flashpoints.  They also look cool, even if I don’t get body sliders.

cobracommander yes they are both “theme park MMOs”  however when you consider all the mechanics of each they are pretty different.

I’d say its as much of a WoW clone as Dishonored is a Half Life 2 clone.

My problem with what he says is the whole “fake geek” arguement.  They idea that his opinion is worth more because he likes X.

As far as fans go we are all equal.  You can’t claim to be a bigger fan of something because you like  X and they like Y.