One of the recurring gamer complaints about Star Wars: The Old Republic is that it’s becoming less and less an MMORPG over time. With Knights of the Fallen Empire’s fresh emphasis on the solo story, how is SWTOR going to still feel like an MMO? And I agree that the MMO aspects of the game have been downplayed or outright lost in BioWare’s promotion of the game. BioWare has now added solo-mode flashpoints, and even the upcoming Eternal Championship will clearly focus on single-player bouts against NPCs.

It would be disingenuous of me to say that SWTOR is perfect and has everything that an MMO should. But the game hasn’t lost its MMO cred, and if we examine it closely, we can see that it’s actually gained some of its credibility back as an MMORPG. Of course, the flaws still exist, so today, let’s talk about where SWTOR’s cred stands by examining some of the major things that people usually point to discredit the game, and let’s also talk about some things that rarely get mentioned that could sway opinion one way or another.

There is no arguing that SWTOR has some of the best stories in the MMORPG genre. Even those who don’t play the game for other reasons will say that the game story is top-notch and wonderfully presented. But the story is clearly a single-player story. That certainly takes away points when we are arguing that SWTOR is a massively multiplayer game. And I will allow those hits and go on to say the biggest subscription MMORPG in the world does the same thing. I will chalk that up to the nature of themepark-style MMOs in the first place. I think it takes away from the whole MMO aspect of the game, but at the same time it does add to the overall appeal of the game.

To counter the argument against SWTOR specifically, I will have to look a bit further back to the Shadow of Revan, when BioWare cut off many of the single-player instances from groups. Prior to SoR, players could join other players in their class story in a spectator mode. They could watch the other players’ action during the cutscenes and then assist during the fights. However, during SoR much of that was impossible.

Though some players believe the same is true in Knights of the Fallen Empire, it isn’t. In fact, you can actually summon other players to your instance. It’s not a perfect fix, but it is certainly better than not being able to do it at all. 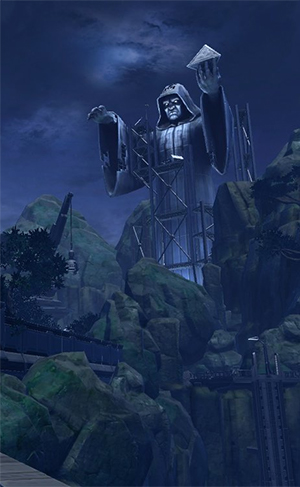 Heroics have always been designed as group content. But since they were tied to the level of the planets, players could just storm right through most of them without any issues. Since KOTFE’s release, heroics have become a bit more difficult because your character level is now synced two levels (at most) above the planets. To the dismay of those looking for forced group-content, it’s still possible to solo-complete heroics despite the level sync.

However, those looking for incentive to group up need to look no further than heroics. Of course, the content itself has become less difficult when you’re in a group. Most of the heroics only required two players in the first place. And since KOTFE, BioWare has given an extra incentive to grouping by giving out bonus credits for each person in the group. That means if you have the maximum of four players in your group, you will get up to four times the number of credits that you’d receive doing the heroic solo.

For more evidence of this, take a look at last week’s Hyperspace Beacon, where I outlined my step-by-step instructions for earning 1 million credits in less than an hour. MJ and I livestreamed her earning her first million in SWTOR that way.

I have to admit that flashpoints seem to left out of the latest updates coming from SWTOR’s camp. The last time we were introduced to new flashpoint, BioWare included solo flashpoints, which defeats the purpose of flashpoints if you ask me, and tactical flashpoints, which are group flashpoints that don’t require a specific group composition. Tacticals might as well be another form of heroics because the group size is limited to four, and other than Blood Hunt (which has a mechanic that could kill a group in one shot), these instances aren’t too much more difficult to complete.

Hard-mode flashpoints do certainly present a challenge, especially ones like Lost Island, but the rewards earned from them don’t really lead anywhere. They are not stepping stones to raids, and frankly they sometimes take longer to complete than just combining a couple of four-man groups and running a story-mode operation, which has much better rewards and can be less frustrating.

There are some people who stand by flashpoints and absolutely love doing them. I can appreciate that. Small-group, challenging content needs to be a constant in the SWTOR build cycle. Well-designed flashpoints have always been a features that has set SWTOR apart from other MMOs. I’d like to see that continued.

And Star Fortresses don’t count considering that even the hard-modes are designed to be soloed. Anyone with the “one and only” title can tell you that. 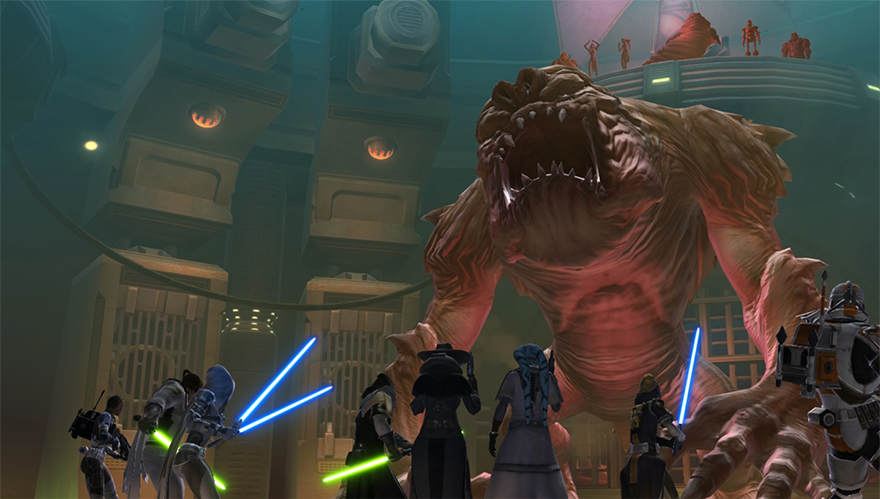 Just like flashpoints, operations have been non-existent since the release of Shadow of Revan over a year ago. But I’m a little bit more optimistic about operations because the core design of operations has changed. I believe that the bolstered story-mode and the featured hard-mode are the stepping stones for really great operations coming in the future.

I know that many world-first type raiding teams have not always found SWTOR raids to be the most challenging, but for me, they have always been fun. And the added incentive to do some of the older hard-modes with the idea of earning top-level gear by completing the featured hard-mode gives my raid group a wonderful reason to mix up the raid schedule.

Hopefully, my little run through the group content was encouraging to those who believe that SWTOR was turning into a single-player game. I believe that it very much still an MMO; BioWare just might not be advertising that side of the game very strongly. Let me know your thoughts in the comments.

The point I was trying to make is that you’re making it sound like the community is beholden to the Raiders to be able to progress, but as you’ve said, the majority of the community that Bio ware has cultivated doesn’t care about raids or nightmare mode or the progression therein that you care so much about. Also, there’s a difference between group content and raid content. Hard mode, nightmare mode, what does it matter? I can see the content without ever having to do either of those? I just don’t get the correlation between casuals and raiders, the necessity for raiders to be there for casuals non-raiders to enjoy the game. You get raid gear from raiding, story mode gear from story, and, unless I’m mistaken, PVP gear from PVP. that’s pretty much been the formula for every theme park in the passed decade. I think it’s a horribly flawed and limiting design choice, but it’s pretty much a standard at this point. The only people who need Raiders are other Raiders, and so on through the other playstyles.

For a single player game, it’s not good enough and you have zero impact on the world. For an MMO it’s not massively multiplayer enough anymore with the new story expansion content. It can’t really decide what it wants to be and on top of that the game is held back by tech limitations due to the clunky engine.

Why do we have to have labels for everything?  You like the game.  You play the game.  Simple.

Dalishal  This is exactly what has been a great boon for my guild.  We have new to Ops players joining our guild and loving it.  We take the time to have “new to Ops” runs every week and once people get going they seek out guild Ops runs on their own.  The result is Ops every day of the week and a renewed interest in group content in general.

My guild is not alone in seeing this so you have nothing to worry about @Dalishal.  As I mentioned in my post below, KoTFE has been great for group content because of the bolster and the level sync.  People are running stuff because they can.  The walls keeping them out including the “elite” are no longer as relevant.  Suddenly, in a year where no new Ops were released, more people are running Ops.

They add more Ops and warzones this year and the game will be in great shape.

Ironwu I went back to chk out the new story…..so much behind paywall now (I did have a sub early last year) my currency cut away ,my gear I had to pay to wear, inventory  and so on …enjoyed playing with my friends while it lasted but sadly I think I am done. The division, Black Desert beta, plus after completing Witcher3-it will be very hard to top a story like that.

I leep having to play devils advocates on these forums….
Several of you have made great points as to why raiding is valuble. I just did a fast gearing run with my guild yesterday on EV. Our ops leader led the raid and has a wealth of experience in the mechanics and positioning. I truely appreciated his advice, and many veteran players advice as I had started recently playing this game. I think many of the silent majority understand and agree that raiding is an important part to the game. I have many more operations to run before I am comfortable running a hard mode operation.
I hate the fact that many veteran players are angry and leaving the game. And by extension it feels like I am somehow not supporting them not by getting angry and yelling too.
But everyone, I have had 6 months in this game tp this point. You have had what, 4, 5, years to get to the place that you are now in your feelings and what you believe. I do not have the weight of time and the same experiences as you. Bioware has not lost faith with me yet. I would assume I am not alone.

I’m horribly addicted. None of the issues raised will concern me anytime soon, if at all. Maybe it lost its MMO cred, but it gained my subscription cred for a good long while.

Into the Super-verse: Early impressions of Valiance Online

Justin Olivetti - August 14, 2020 15
NOW STREAMING LIVE ON TWITCH
OFFLINE - SEE YOU NEXT STREAM!
NEXT MOP STREAM
No events to display.

The Daily Grind: What was your most awkward MMO roleplaying experience?

Into the Super-verse: Early impressions of Valiance Online

The Daily Grind: Do you play MMOs with ‘rested experience’ in mind?

Blade and Soul’s next update introduces a compound system to the...

Global Chat: Are MMO classes too similar to each other?