Among the dream team John Smedley assembled for Hero’s Song — studio Pixelmage’s new 2-D open-world ARPG — is Patrick Rothfuss, an acclaimed fantasy author who rocketed to stardom in 2007 when his first novel, The Name of the Wind, won multiple literary awards and was followed up with a New York Times bestselling sequel. Smed tapped Rothfuss specifically to plot the game’s lore, world, and story. We spoke with him about his process, his worldbuilding, his thoughts on immersion, and what video games he plays when he’s not busy penning blockbuster books.

Massively OP: You’re primarily known to fantasy audiences for your award-winning novels. Why make the leap to video games? What did Smed say to drag you over to the dark side?

Patrick Rothfuss: What a lot of people don’t know is that I actually tried to write a computer game long before I tried to write a novel. What’s more, I’ve been playing computer games pretty much since the beginning. So turning my hands to videogames isn’t a leap so much as it is a small step for me. Though it is a step in an exciting new direction.

A 3-D medium might seem more immersive for storytelling than a 2-D one – have you met any challenges specific to the 2-D medium of Hero’s Song?

The truth is, storytelling becomes more immersive and more inclusive the more abstract the art is. If you don’t believe me, I’m guessing you’ve never read a comic book. Think about it, the art in graphic novels could be more realistic, but it’s not, because that sort of thing actually stands in the way of a good, immersive narrative experience.

Take the most recent Fallout game, for example. It was an amazingly graphically intensive game, but half the time I was thinking things like, “God, her teeth look really weird when she talks.” or “Why the hell is that guy hovering five inches off the ground.” How is that immersive?

People might play Fallout 4, but they don’t get lost in it. There’s no graphics at all in novels. But people get lost in a book. 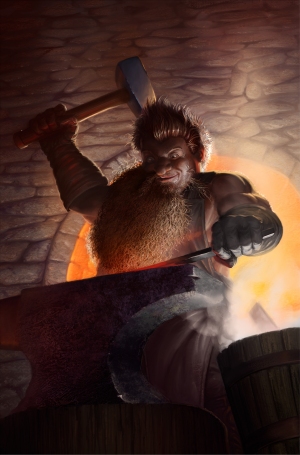 As to worldbuilding: How much of your work will we see in the game as opposed to on a lore website? Are you building backstories or quests or all of the above?

I’m not writing text for the game. I was brought on board primarily to help with world creation. But that actually touches on a lot of other elements: mythology, gods, religions, creatures and playable races, magic systems… It’s all tangled together.

I also chime in about gameplay stuff, if I have a good idea, but my best contributions are usually related to narrative in some way. After all these years, I have a pretty good grip on how stories work. The tricky part is getting the story and the gameplay to work well together. That’s where a lot of games run into trouble….

The main character in your Kingkiller Chronicles examines the path that he traveled to becoming a legend. How will you approach putting the player in the role of a “legend-to-be” — or will you take a different route?

I don’t know how much I’m allowed to talk about at this stage. But I think it’s safe to say that players are going to have a chance to pursue their own legendary paths and leave their mark on the world. In fact, I’m tempted to say that we’re going to be doing this to an extent people have never seen before. It’s one of the most exciting and innovative aspects of the game to me.

What’s your favorite video game? What would you say is the pinnacle of achievement when it comes to video game story?

It’s hard to pick an absolute favorite. There’s a lot of games I’ve adored over the years. The original Bioshock. Portal. Deus Ex. The old Infocom games, of course… But if I were forced to pick a favorite, it would probably be one of the original two Fallout games. Or Planescape Torment. They both had amazingly good storylines. Just as importantly, they gave the player the opportunity to influence the story.

That’s the edge games have over other narrative experiences, like novels, movies, or comics. With rare exceptions, only a game can give you the chance to actively influence the story. If you don’t take advantage of that when you’re making a game, you’re not just wasting potential, you’re ignoring what makes game narrative unique.

We’d like to thank Patrick Rothfuss for his time speaking with us! And don’t forget to check out our exclusive interview with John Smedley himself from earlier today.