Behind you, it’s totally dark and the way has closed off. There’s simply no going back. Up ahead, everything is in shadows. You creep forward. If only you could see what’s up around the corner; if only you knew what was there, awaiting The Secret World in 2016.

If the answer as to what to expect were as easy and obvious as poking your head around a corner, it wouldn’t be The Secret World, now would it? In a game steeped in mystery, discovery, and revelations, answers are never just handed to you. Knowing exactly what is going to happen in the next 12 months is about as likely as making it through The Cost of Magic perfectly the very first time. But we do have clues! And those clues point us in certain directions. It’s just a matter of piecing them together and solving them. And that, my friends, is very Secret World-y

This fact is pretty obvious: There will be more issues in 2016. After the recent financial worries, some folks might not have felt as confident about that fact, but I definitely am. How many issues? That depends. Funcom has been pretty consistent about releasing at least three a year, so I anticipate that number, or even more — especially if issues are slightly scaled back in scope. By the end of the year I can see us cracking open Issue #17, maybe even #18. After all, we know that the story line is already laid out into the 20s, so that is one step of development already completed. And since we know that at least the next issue (and maybe a couple more), will be focused on areas and even characters already in game, there is yet another time-saver.

While it’s almost unfair to think that the new issue’s focus will be on the Savage Coast (after all, The Park was already set there), this is where I foresee Issue #14 or 15 being. Besides the fact that Lead Designer Romain Amiel specifically said that they were going back to the TSW’s roots (and what’s more root-like than the first zones players experienced?), we’ve already had a teaser introduction to one of Carter’s friends. On top of that, the devs shared some of Carter’s family history with us. (Oh how I’d like to practice my RL sabotage mission skills by sneaking into that vault the devs spoke of where all this information is stored!) There is obviously story there waiting to be told; it makes sense to continue fleshing this out. Besides, Carter is totally intertwined with the Academy, and that destination is near — if not at — the top of the list of fan favorites.

If the focus is the Academy, my slightly long-shot hope is that we’ll get some serious Montag story. I’d love me an issues dedicated just to him! However, I am less confident about the chances of this; no matter how much fans love the Academy’s Headmaster, getting a heaping helping of Jeffrey Coombs dialogue may be more than the studio can manage right now. Oh, but a girl can dream.

After we delve a bit deeper into some Solomon Islanders, we’ll be moving along to the next issues. It is possible there might be some Transylvania focus tossed in, but we’ll be moving into unknown territory within three issues. You don’t have to be clairvoyant or Sherlock Holmes to know that a new area is opening up: Devs have already stated it. The real speculation is where the new zone will take us. Some say Antartica. Some have even suggested Atlantis. Personally, I think a trip to the Orient opens up some very exciting possibilities.

Issues won’t be the only work going into TSW during the year. The team will continue improving on PvP, and I am not just talking about the release of the Shambala scenario. PvP may not be the focus of a large portion of the playerbase, but I fully anticipate it becoming more fun and more mainstream as the months wear on. 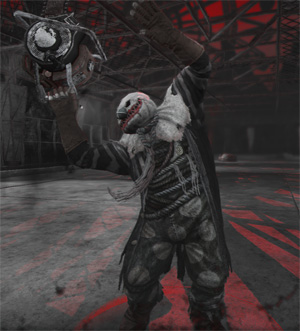 Although the scenarios have not proven popular, I can see a new type working its way into the game before the year is out. Obviously there were plans to have different scenario modes; now is a good time to bring those modes out and make them playable. This might entice more players to give them a go. There hasn’t been an update here since the release of Issue #8, yet we’ve been teased with the promise of them from the beginning.

Events will remain popular, and I predict a new one will be developed during the year. Why not? It makes players happy, and offers the opportunity to introduce a new type of bag that can also be sold in the item shop. Players love their cosmetic items! As for existing events, I expect Samhain 2016 to include an amazing new mission chain, though every year I wonder how devs will top the last. A new Christmas event will also be a necessity since there wasn’t one in 2015. And I do hope music plays in there somewhere. maybe we’ll even get to finally keep the flute frm A Christmas Conspiracy! On that note, how about we just have more instruments introduced to game? There is a music system already, even if simple.

Single (player) and loving it

It’s no secret that I loved The Park. I also happen to know that financially, it made out alright. I certainly see one more single-player experience happening near the end of the year — perhaps at Halloween again. Because the atmosphere and ambiance is so perfect for that season, developing another game for release then and capitalizing on folks who want to be spooked would be wise. Where would it be set? That I can’t tell you — but I have some ideas if Funcom needs suggestions: the Franklin Mansion, the Lady Margaret when it first encountered the Filth at sea, the Academy…

Too far in the future

As much as I personally want it, I do not see housing even flashing on the radar in 2016. There is just too much work that needs to go into feature to do it justice the way the team wants. (And while they still don’t want me to really discuss it, I can assure you it sounds pretty dang sweet!) The resources and manpower just won’t be there this year. But, and this is my big but, I see things picking up for the studio over the course of the 12 months. 2017 might be the year we see something develop in the player housing area.

I doubt any one of us could call the direction of the game’s development in 2016 perfectly; even the roadmap the devs have is subject to change depending on various factors. But that doesn’t mean we can’t make predictions. After looking at last year and piecing together all the clues we’ve been left, what are your thoughts on TSW going forward this year? What do you see happening, and what do you want to happen? Share your thoughts, and we’ll all get together next December and see just how close we came or how far we missed the mark by.

MJ Guthrie
Ooops. Different notes? Then i am sorry, i was not aware of that.

Sylow Ecept that it isn’t the same flute and has different notes, and I really want the Christmas one!

Ironweakness No — definitely not just you =D

There are some much more sophisticated builds out there, which make good use of weapons with different buildgoals and different passives. Even just using Elemental Force by itself, which foces every eigth attack to crit, results in rotations getting more interesting for the real optimizer. While the normal user simply fills up with one more builder, of course.

But if you are really interested into it, there’s plenty on sophisticated builds on the TSW forums, i won’t get into more details here, just clarify that really high developed setups have more complicated rotations than people here claim them to be.

Nordavind
Might be just me, but i would’ve expected better of you. You really consider TSW “P2W”, just because of the one stupid slip with that talisman from The Park?
I can tell you’ve never played a real P2W game yet. (On the other hand i have to admit, i still do not care the least for PvP in TSW. It’s the single weakest aspect of the game, anyway. If PvP is your interest, there are many better choices out there.)

BalsBigBrother Ironweakness
Bah. Indeed, the first one or two times it’s overwhelming. Then you repeat it another time and it gets extremely easy. In the end i used that one as AP-pump when i wanted to quickly finish the skill wheel. Some people can beat it in 7 minutes, i in the end needed 9, and it gives more XP than many other missions.
It’s just like the Castle, a matter of learning it first, but then becoming quite easy.

So true >.> Thanks to moba’s I cant even get my friends to try mmo’s anymore even of they’re free.

Issue 13 was a Side Stories Mission Pack hidden as a full Issue. That will continue for a few “Issues”, as they work on the new area behind the scenes. I forsee 1 proper issue being the new area. The rest of the year might be glorified mission packs for Issues.