I have a terrible confession to make: I was about to write off Elder Scrolls Online. I was going to consider it dead to me. The game has made major steps in the right direction, but as my report card indicated at the end of last year, it’s really just an average game from an MMORPG player perspective. In the latest update, however, Creative Director Matt Firor described a few things that gave me pause, and I think you should be considering the implications, too.

It would be silly for me not to mention player housing and what’s currently being called the barbershop. I’ve said for a long time that housing gives players a sense of ownership in the game, and every MMO should have some sort of player-ownership. And the barbershop’s features of name change, race change, and even gender change certainly makes me sit up and pay attention. But the biggest upcoming change for me is level-scaling across the whole game.

Firor, in both his blog post and on ESO Live, said that level-scaling will be systematically trickled out to the whole game. It will be designed to give the game a more open feel. He also explained that it will function very similarly to the way that Orsinium works. For those not in the know, that means that your character will automagically scale up to the level of the area. Your stats increase but not your skillset. You’re able to hit harder and defend better, but your abilities do not change.

When level-scaling hits the servers, I can think of six must-haves that should come with it to make it a complete package. Those who played City of Heroes in its heyday will recognize a lot of these.

Scale down to area

I’ve seen some people say that all the content should be normalized, and that we should we be able to go anywhere we like in the game and do the content at our level. I actually understand that perspective, but I believe it undermines part of the character growth in this game. And being a fan of old-school Star Wars Galaxies, I enjoy the idea of horizontal progression, but for this game and its audience, I believe that a completely non-vertical progression system at the start of the game would be too jarring. But I’d like to be wrong in this case.

Scale up to party

Of all the games that have and had level-scaling, the one that did it best is still City of Heroes, and I think the key feature that set it apart was the player’s ability to sidekick another player, allowing him to scale up to you.

Of course, there should be limitations on scaling up. For instance, scaling should take you up to only the minimal level for the area. There should definitely be some “carrying” of the other player by the person who is sidekicking. And you have to be within a specific radius of the sidekick at all times, else he should lose his buff. 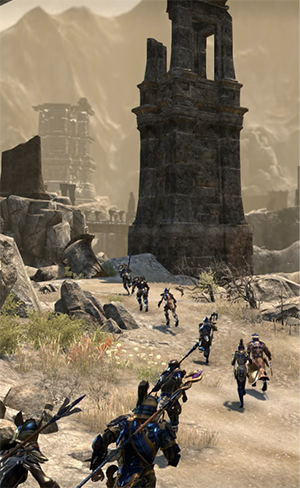 There will be bugs when the scaling launches. Players will complain about this part or that. With the number of ability trees that players can climb, balancing will be an issue. But there is a way to minimize the impact on the game as a whole: Level-scale dungeons first.

Nearly every single dungeon in this game not only has difficult fights, but they also are instanced. These are also areas of the game many players would love to have help in, since it usually houses the boss for the area. My suggestion would be to start there, work out the bugs, then send it to the open world.

The most frustrating part of ESO since the launch of the game has been one player disappearing suddenly without other people in the group being able to follow because of phasing. I like phasing. I believe it’s a wonderful way to help players feel like they are making an impact on the world, but the price of phasing has always been that some players you’re grouped with will not see the same things that you do. This has got to change when level-scaling is implemented game-wide.

On paper, the fix is simple. There are invisible lines on the map that players cross when entering a phased zone. At this point, the player who hasn’t completed the story in that area will disappear from the person who has. Simply giving the second player across that line a little warning pertaining to the other player’s instance will be highly effective. This will allow me, let’s say, to either enter my own phase if I want or follow my friend into the other instance.

Reward drops scale to your needs

I don’t think that everything needs to be about the gear that you gain from the mobs that you kill. There are other drops that make downscaling a viable thing. Some games have allowed us to gain gold equal to the our level. We’ve also seen games drop crafting materials. Guild Wars 2 drops dyes. But I believe that motifs would be a wonderful drop for ESO. And if motif drops were more common when you are downscaled, then that would be a wonderful incentive to help out your friends. But really, that’s just a start. The bottom line is that higher levels will need extra incentive to go help their low-level friends, and this is one way to do it.

Group finder changes could be an article in and of itself, but I don’t want to touch on specifics here because ZeniMax has said already that the group-finder will receive a major overhaul in the next DLC patch. So there really isn’t a big reason to hit on the changes that need to happen considering they will likely change in the very near future anyway.

What are your thoughts? What major changes need to take place in order for level-scaling to actually work in ESO. Let me know in the comments.

I’ve played Dark Souls 1 and it didn’t work for me. From my previous argument I am more for the slower paced strategic combat of yore. Action combat doesn’t work for me (never has) in an RPG. But that’s more what I like to play versus it being better (though I think it is).
In terms of MMOs, I wholeheartedly agree with you. You essentially described Everquest (which I still play). No other recent MMO has come close to what it offers – I don understand why.
Gaming to me isn’t about necessity, it’s about enjoyment and leveling is a form of that (for some people), buy understand not for you.
My point still being that all forms of advancement or “levelling” are relevant, but it’s value is subjective to the gamer.

I uninstalled it. Tried to love it. Felt like a solo grind. Some things are decent to be sure.

What was the last straw? I’ll admit I discovered the new improved vanilla Wow servers. I’ve grouped more times before level 10 now in vanilla Wow than I have through Vet levels in ESO. I forgot how much damn fun Wow used to be … also have died more times almost then in ESO through vet levels lol.

Scaling down would be great. I had a serious problem overlevelling everything in a zone to the point it was all grey and awarded no XP. By the time I finished Cadwell Silver I was already VR10.

YouTube hippo vs rhino. Hippos may be dangerous to us frail bone sacks but rhinos make hippos look like flemish giants :)

Play bloodborne, demon souls or dark souls 1 to how leveling can be done right.
As far as mmos, they should have been an ecosystem established for players to tinker with. I believe that minimal story maximum freedom is the key to reviving mmos.
Giving players the tools to make their own story is what is important, I don’t see how level gating is necessary. Harder enemies should be skill gated and this better rewards are obtained through mastery and not unemployment ;)

Bannex19
What are better ways of gating content?  I guarantee they will have their limitation and faults as well but I’m open to discuss.  What you describe isn’t leveling (alone) its leveling today which I agree is a great disappointment.

The point of leveling was to imbue a character with new skills from “living” in an environment (be that moving a story forward or doing your own activities over time). It was a way to measure growth not power.

Over time the concept traded off choice and complexity for exhibition and accessibility, changing the gameplay from strategic challenge towards casual engagement.  For evidence one only has to look from Final Fantasy 1 (to 3) to Final Fantasy 13.  Or from Morrowind to Skyrim.  Each iteration slowly removed the freedom and difficulty to make it easier for a larger audience to play.

From that perspective, yes leveling sucks but by the same argument so do most current MMORPGs so effectively we are saying the same thing.

Scaling down sounds ok when it’s describing mentoring newer players, but too often it’s abused as a way of leveling up by doing easier content while over-powered instead of taking on the content at an appropriate level – which is the whole point of MMOs in my view.

SoMuchMass alexjwillis  It’s one of those Things that sounds good, like communist ideas. But the human beings, are definitely not the right breed for those ideas.

Bannex19
Dude, don’t even joke about hippos. Any safari guide worth his salt will tell you they are far more dangerous than lions.

The Daily Grind: Walking in MMOs – or running?