END_OF_DOCUMENT_TOKEN_TO_BE_REPLACED
I’m going to go out on a limb here and suggest that there aren’t many mechanics that are more fantastical than zooming around within picturesque environments with amazingly outlandish backpack-strapped wings on your back. I was delighted to see that gliding was just as fun and useful as I imagined it would be when Heart of Thorns launched, but I caught myself forgetting that I could only glide in the Heart of Maguuma more times than I’d care to admit. After banging my space bar in vain one too many times, I couldn’t help but feel frustrated whenever I was out and about in Central Tyria and kept forgetting that it was a glider-free zone: I was definitely part of the pro-CT gliding camp, even if I did worry about implementation. Imagine my delight, then, when my wee wish came true in Guild Wars 2‘s Winter 2016 patch!

I’ve had plenty of Central Tyrian airtime at this point and could ramble on for hours about it, so for this edition of Flameseeker Chronicles I thought I’d do just that. I’m going to preface some beautiful in-flight screenies of my favourite places to glide in Central Tyria with a little bit of background information about verticality and no-fly zones in the form of a Central Tyria gliding FAQ.

How do I glide in Central Tyria?

You glide in Central Tyria in exactly the same way you do in the Heart of Maguuma: Simply unlock the Glider Basics mastery and jump off high things in any open-world map!

I heard that gliding is pay-gated: Is this true?

I don’t consider it a deliberate pay-gate at all, no. Yes, you do need to have purchased HoT in order to glide in Central Tyria, but that shouldn’t be too much of a shocker considering the mechanics are tied into the expansion, folks. It’s not as though ArenaNet has deliberately removed or locked a feature from the free version of the game and popped it behind a mean old paywall: The expansion mechanic has simply been expanded to incorporate a wider area.

Gliding is kept fairly vanilla in Central Tyria because this was the easiest way for the team to grant our wish for CT gliding without breaking anything. You won’t find any leylines or updrafts here, but you can use the advanced gliding techniques such as Lean Techniques and Advanced Gliding.

The short answer here is no: I was pretty worried that CT gliding would be the beginning of the end for jumping puzzles myself, but this is not the case. There are a couple of clever ways in which the ArenaNet team has managed to keep our jump puzzles challenging while bringing us gliding, the most important of which is the implementation of no-fly zones. Add to this the fact that gliding is limited to its most basic form with no updrafts or ley lines and you have some rather safely hemmed in jumping zones!

Where are these no-fly zones?

There are no-fly zones dotted around Ascalon, Kryta, Shiverpeak Mountains, and the Ruins of Orr. Most of these zones are simply jumping puzzle protection as described above, but others exist to prevent unexpected alternate access to certain areas. You’ll be pleased to know that the Diving Goggles platform has also been protected with a no-fly zone too. You can find more specific details on the GW2 Wiki if you’re curious, but you shouldn’t find the no-fly zones to be terribly restrictive.

What happens if I glide into a no-fly zone?

You’ll have a short amount of time to correct your course, and if you don’t turn around your wings will fold up and your character will begin to fall, just the same as when you run out of stamina mid-air. The no-fly zones don’t extend the whole way to the floor, so remember to open your glider at the end of your plummet and you’ll avoid that nasty fall damage.

Is there anywhere else I can’t glide?

You can’t glide in any of the old instanced content because it simply wasn’t designed with gliding in mind. Story instances, dungeons, fractals, and PvP zones all disable your glider. They’re not strictly no-fly zones as described above; gliding is entirely disabled here, just as it used to be for all of Central Tyria.

How have zones changed for gliding?

They really haven’t changed much at all! ArenaNet has granted us the ability to glide, but the whole of Central Tyria hasn’t been remodelled to make it any more accessible or prettier by air. If a zone was flat as a pancake before the Winter 2016 patch, it still is now; likewise, places you’d always wanted to jump off with a glider remain intact. You might stumble across some places you couldn’t reach before, or perhaps you’ll land somewhere a little too rocky and unnavigable, but that’s all part of the fun! 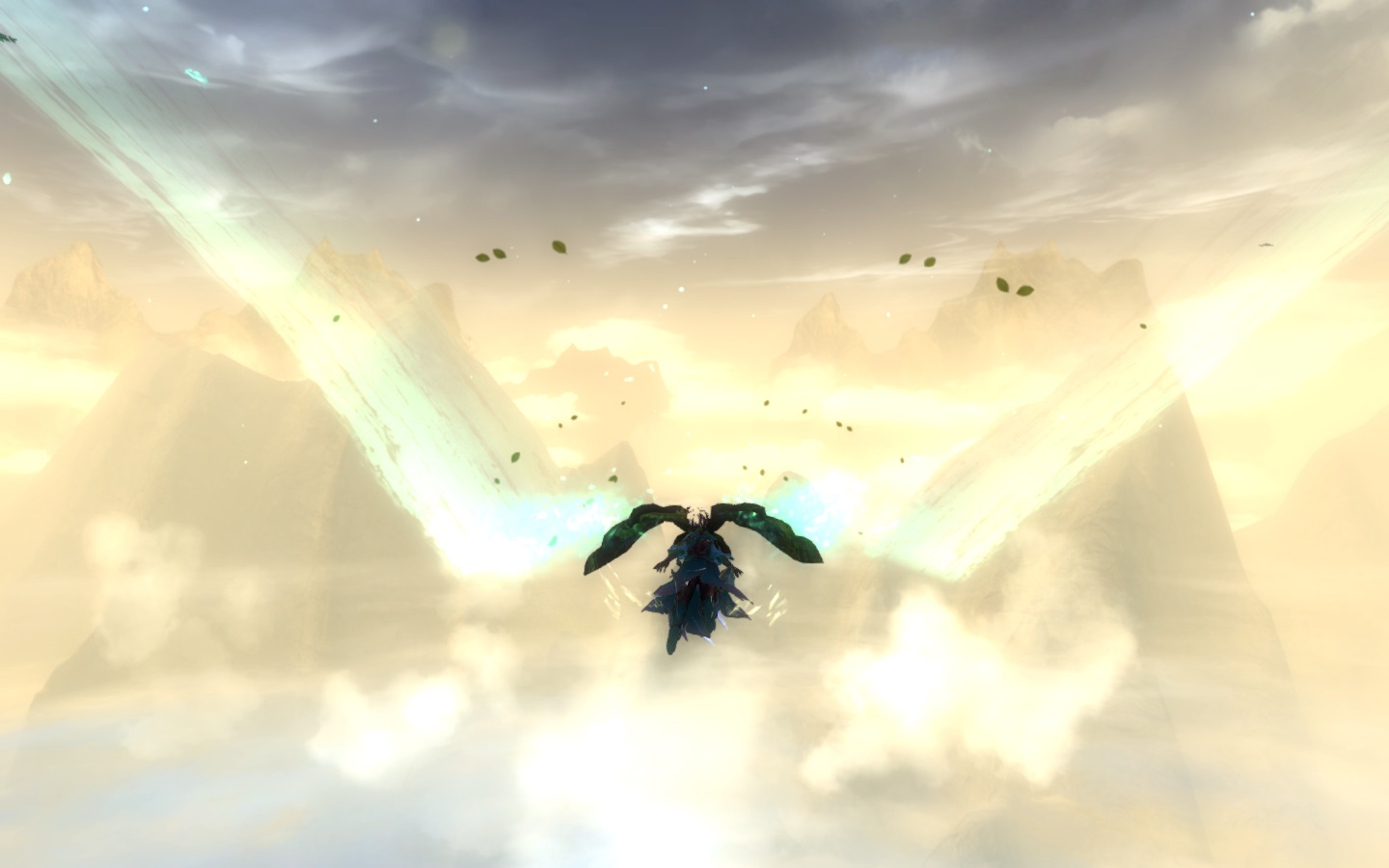 Ain’t no bookah can tell me that Rata Sum wasn’t made to be jumped off of! Just look at how stunning the quaintly cloudy floating city is with a pair of wings strapped to your back! I featured Rata Sum in a previous article in which I discussed my favourite vistas, so I feel a teensy bit bad mentioning it here again, but I just can’t apologise when the view is just that breathtaking. 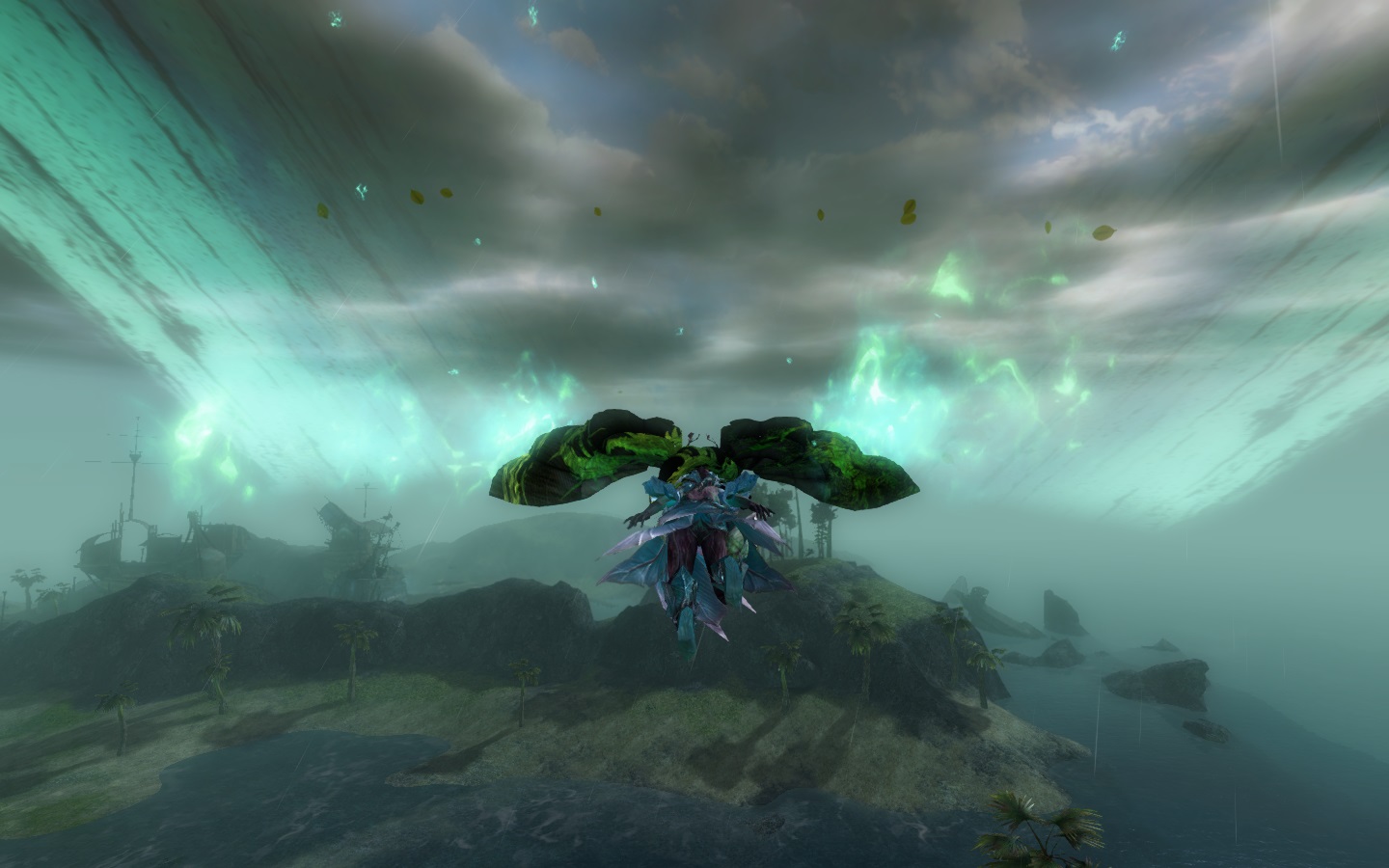 Jump around the Stormbluff waypoint and you won’t be disappointed: Gliding your way between the islands with all that jaunty pirate goodness all around is some of the most fun you can have while sightseeing. Gliding really makes me appreciate the gorgeous texturing and lighting in GW2, especially those delightful water effects! 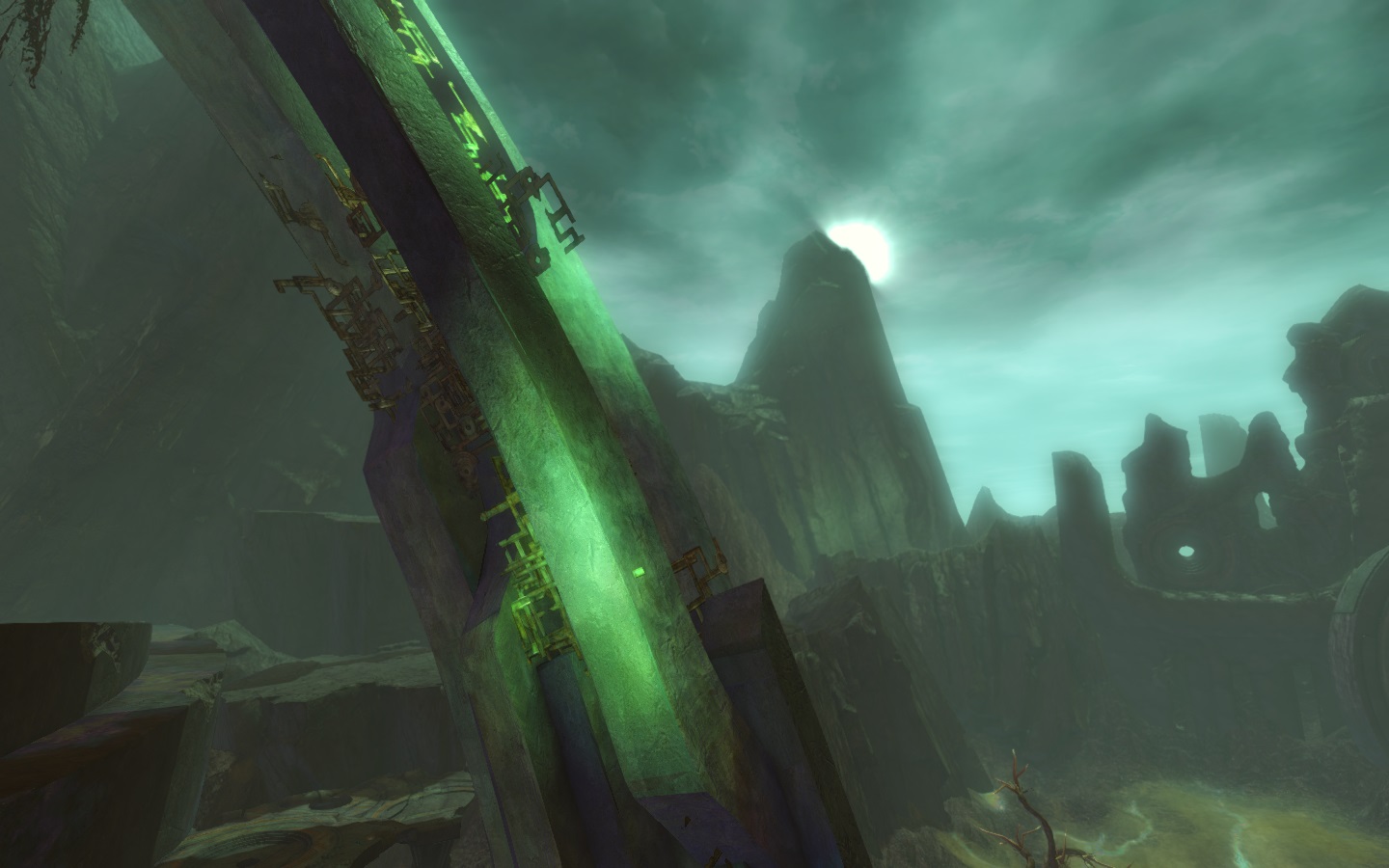 The Cathedral of Glorious Victory is a vision at the best of times with all its spooky decor and rainbow oil spill goodness, but with a whole theme park worth of rocky cliffs and outcrops that just beg to be jumped off, this zone is an ariel delight too. This area feels as though it was built with verticality in mind, so it’s a great happy accident to stumble across. 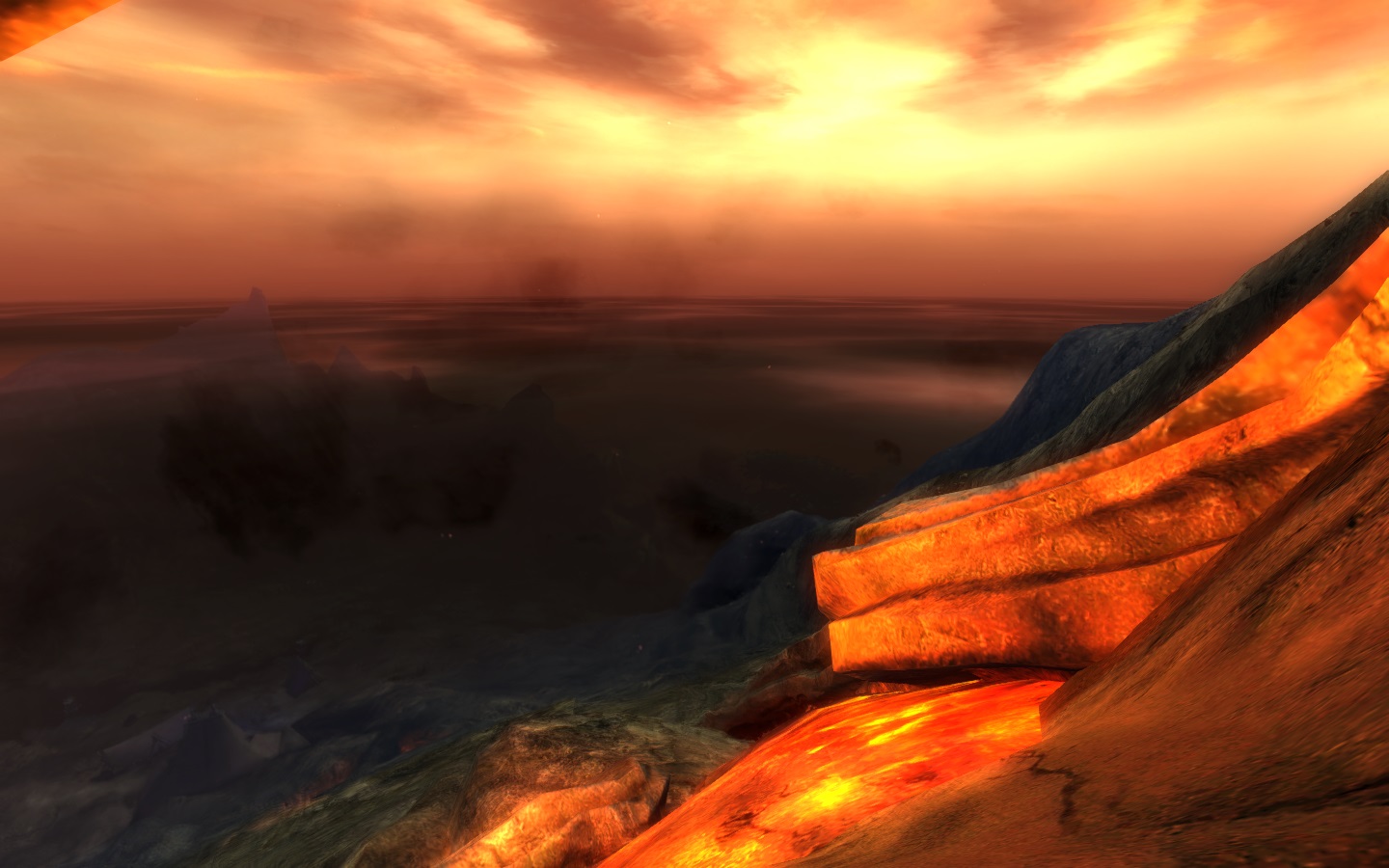 Swoon, swoon, swoon! This place always does look epic, but now it feels as though I could be on a dragon’s back as the beast makes a rare excursion out of its great lair when I use the first-person camera. I just adore it all: rising into the smoke plain and seeing what’s above, checking out the cracks and magma flow hidden below, and sweeping through the alien-looking pyroclastic formations. 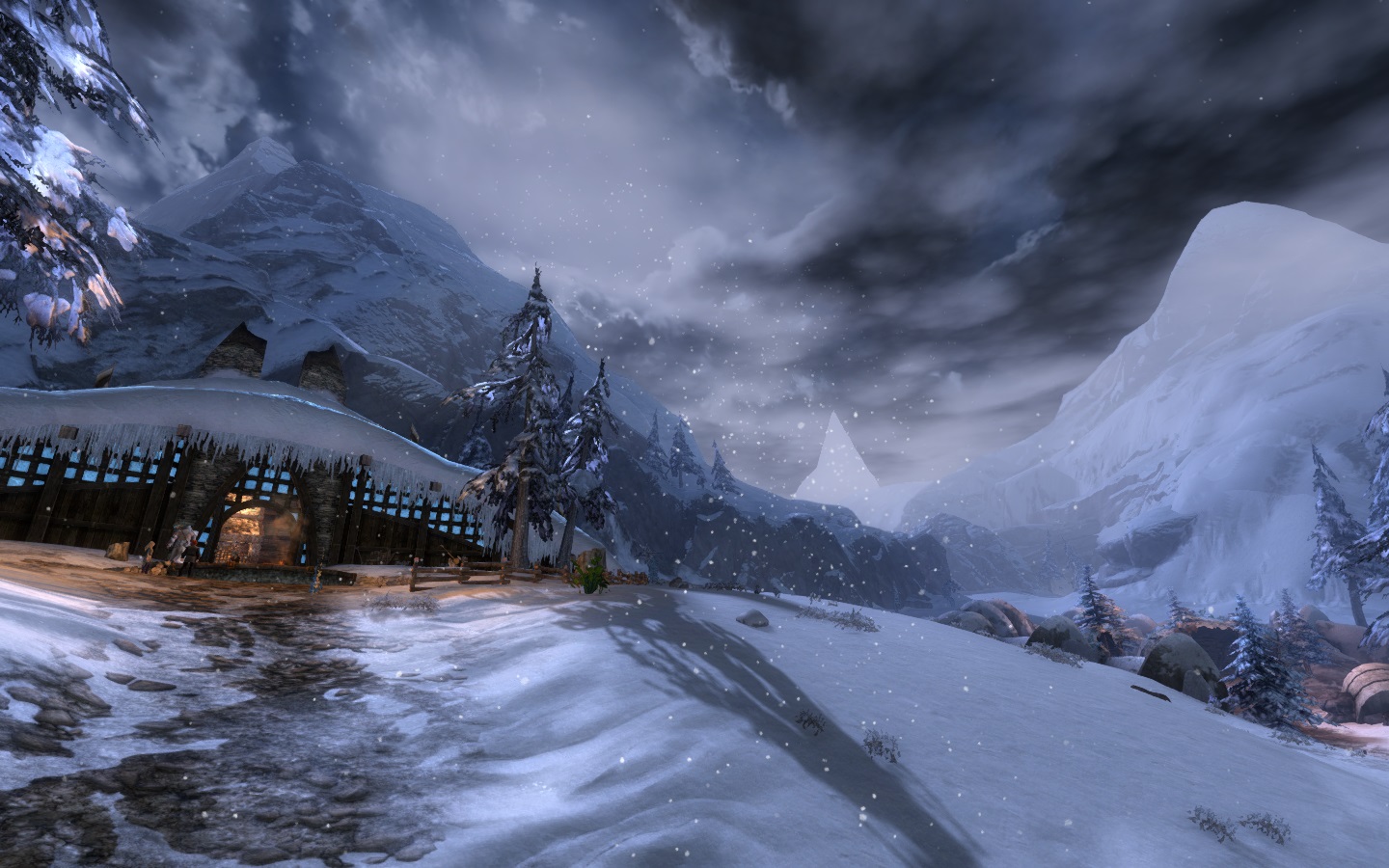 Just go to the Dredgehaunt Cliffs and just leap off something right now… I promise you’ll want to thank me later for the visual treat! To be fair to the rest of the zone, you’d be hard pressed to be anywhere within the mountain range and not find somewhere fun to jump from. Jagged cliffs and elevated Jotun lands overlook massive vales, just begging for me to unfurl that glider and get exploring.

I hope you’re loving this new way of exploring Central Tyria as much as I am! I feel as though ArenaNet have given me a portable vista stick with the gift of Central Tyria gliding. Don’t forget to share your favourite aerial screenshots in the comments if your favourite spots didn’t make my list.

Tina Lauro has been playing Guild Wars 2 since it launched and now pens the long-running Flameseeker Chronicles column, which runs every other Wednesday and covers everything from GW2 guides and news to opinion pieces and dev diary breakdowns. If there’s a GW2 topic you’d love to see covered, drop a comment Tina’s way or mail her at tina@massivelyop.com.
newest oldest most liked

disUserNameTake woolydub I thought they tested gliding in WvW and found too many exploitable things? I thought I read something about WvWers flying down into keeps and bypassing gate guardians and such.

Those are some great screenshots. Thanks for sharing!

woolydub  I’m in T2 and WvW is more healthy than it has been in months.  There’s even quite a bit of activity in the new BLs though it falls off later in the week.  People are starting to enjoy the new BLs now that they’ve gotten off the hate train and are actually learning how to play them.

I’m sure T1 is even more active, and T3 is also not dead.

Below T3 though you could be right.  I have heard the lower tiers are mostly a ghost town.

I do wish we could glide in our home instances.

I second Mount Maelstrom, and I’d add Dry Top to that list. No more worrying about traiting fall damage for that zone anymore. Also, as a tip, the Troll’s Revenge jumping puzzle in Lion’s Arch allows gliders. You can skip some good portions of it.
The underground in Silverwastes allows it too, which would make the scavenger hunt that much more bearable for those who couldn’t do it before.

Don’t have HoT. All i can do is appreciate the sky full of ad-banners.

I think ArenaNet would do well to add one “Captain’s Airship” to every core Tyria zone. When you activate an airship pass it would teleport you to the particular airship in the zone you were in. Then they could remove the invisible walls from the airship and it would make gliding in those zones way better. It’d be a fairly straightforward change that would make core Tyria more fun than it is now to glide in because of the height of the airships.

I’d also like to see them add in rental gliders for free in WvW for those who don’t own HoT. I think WvW is in dire straights and adding in glider combat for everyone in that one region alone would be a step in the right direction for WvW and it needs something, anything at this point. I think allowing gliding in core Tyria was a great advertisement for HoT for the people who haven’t purchased it yet. Not adding it in WvW as a core thing was a mistake. WvW needs warm bodies to work and moreover it needs warm bodies to be fun. Don’t paywall something in WvW when you have a serious population problem. The new borderlands seems as if gliding would work really well there. Same goes for the original Alpine Borderlands. After watching “Guild Chat” with John Corpening a few weeks ago, it seems like they have a real reluctance to add in glider support for WvW even though they admit to having a serious problem on their hands with that game mode. He mentioned wanting to add in glider support, but that it would hurt balance if they added gliding to it. He’s right, but deciding to keep the gliding paywall at the expense of fun new mechanics in WvW seems a bad choice in my opinion.

One Shots: The ultimate tree house

Final Fantasy XI: The Voracious Resurgence gets its own teaser site

Path of Exile lays out a rough timeline for its next...

Star Citizen discusses its plans for finalizing the Stanton system