I can’t lie: The fact that BioWare took nearly seven hours longer to launch the next chapter of Star Wars: The Old Republic than it had promised tainted my impression of what was to come. I understand the need to separate the experience of the actual launch of the content from the content itself. But I cannot help but wonder what caused the launch issue, and I ask myself the entire time I played through the hour and a half of chapter content, “Was this really worth all the trouble to get it pushed out?” To be perfectly frank, it wasn’t. But it isn’t all bad either.

I livestreamed my first playthrough on my Twitch channel last night, and the people in the chatroom were free to comment as I played. After hearing some of my issues with the chapter content, one watcher said to me, “Why should I play through this now when I can just watch the livestreams.” I guess if you like just watching the cutscenes sprinkled with periodic commentary, then you’re probably right. But I do recommend that you play through Knights of the Fallen Empire Chapter 10: Anarchy in Paradise yourself instead of letting someone else experience it for you.

The chapter does have its moments, but a few key parts make me wonder whether it was worth subscribing for earlier this month, let alone for the last three months. Let’s break it down into four key areas.

Although I believe that all the elements together actually tell the story, I’m going to call the plot combined with character development the story for the purposes of this article. As usual, BioWare created an interesting though not compelling plot.

The spoiler-free version starts with Theron Shan mentioning an anarchist called Firebrand terrorizing the Zakuulan spire. In fact, Koth even calls her a terrorist. And in a not-so shocking twist, Firebrand turns out to be Kaliyo Djannis, the first companion the Agent gets in the core storyline. You job is to then follow Kaliyo around to try to convince her to join in your cause to take down Arcann.

The progression of the story is not that interesting. You are quite literally following Kaliyo from place to place as she plants bombs or talks to others who are a part of her movement. However, the story makes up for that by introducing us to interesting characters and some deep insight into Zakuulan society.

I have always been a fan of Kaliyo as a character. I would never want her as a best friend or worst enemy, but her motivations and personality have always interested me from a writer’s point of view. When I saw that she was possibly a freedom fighter with cause made me really question what had happened to her over the five years my character was in carbonite, but I was very happy to find out that her motivation made complete sense for her character. 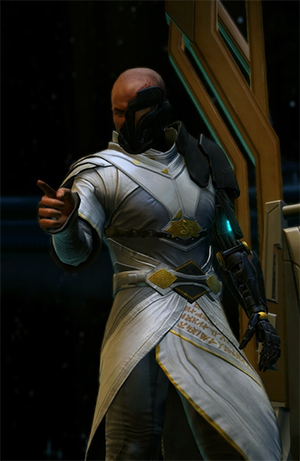 We all know that BioWare stories are famous for their cinematics and character choices within those cinematics. This time around there are good and bad elements to the cinematics.

First, the dialogue choices that I ran into were wonderful. I didn’t find one this time around that didn’t match what I was thinking. The dark-side and light-side choices appeared to match up very well, and the text on the wheel did a fairly good job of matching up with what was actually said. A couple of the choices were great, and as usual, the flirt options were appropriately awkward.

Second, the animations made me want to pull my hair out. I can’t say off the top of my head if there were any motions or gestures that didn’t make sense, but most were completely separate from the dialogue. I’m sure you’ve seen a child’s stage play where a kid will say the line of dialogue, stop, then do whatever action that he’s supposed to. We love it when a baby-faced munchkin does that, but we don’t want our terrifying villains and companions to do the same thing.

Let’s talk about telegraphing. In movies when you telegraph, it’s foreshadowing a plot point or next action without using dialogue. And BioWare pretty much gives away the “twist” because it telegraphs so strongly with the camera. I remember thinking, and I might have even said it out loud on the livestream, “OK, I get it; this is important! You can stop panning that direction any time now.”

That said, the camerawork and cinematography overall was actually very good and much better than the talking-heads version of cinematics we have in the core game. We had interesting transitions and angles. The camera was focused well, and it moved in ways and from interesting angles to help better tell the story.

Before writing this sentence, I literally held my face in my hands thinking about how in the world I could talk about how uninteresting the gameplay is without coming across as a total hater. However, I just don’t know how to do it. BioWare, I was bored. Every single encounter except for the final fight seemed to be just filler between cutscenes.

There seemed to be a couple of fights that might have been boss fights, but my DPS was so overpowered that if there were special mechanics to the fights I was able to completely ignore them. I thought perhaps it was because I was on a DPS character with a few pieces of raid-level gear with Kaliyo set to heal. But I ran the story again on a tank with purple 208 PvE gear, it was still a cake walk. I even went so far as to set Kaliyo to DPS so that I didn’t even have a healer at all. That move only made me stop every once in a great while to heal up out of combat.

The only interesting part of the mechanics was a portion of a side quest where I allowed two people to escape from interrogation. I’m not usually one to knock MMO mechanics because they are innately uninteresting, but at very least, they can be challenging sometimes.

Lastly, let’s talk about the payoff, the part of the quest string where everything comes together. As I mentioned, the payoff was telegraphed, but that didn’t make it uninteresting. However, it was more interesting from an intellectual level than it was surprising.

One of our regulars on this site, Woetoo, questioned whether things would be different if we had made different choices in Chapter 10 or any of the rest of the story. And Woetoo, I can answer that question because I happened to play the story the other way last night while I wasn’t streaming. Yes, outcomes are incredibly different based on your character choices. In fact, this is the first choice in KOTFE that appears to have a huge impact on the story itself.

The bottom line for Anarchy in Paradise is that if you like SWTOR and like KOTFE, you’re likely already subscribed and have played through the content, and if you haven’t you will soon. However, for those who are on the fence about subbing up right now, Anarchy in Paradise isn’t going to get you to stay. It might be best for you to wait a month or so and get Chapter 10 and 11 at the same time.