NCsoft’s fourth quarter 2015 financial report is in. The Korean gaming giant reports that its quarter-over-quarter sales, operating profit, and net income are all up, 21%, 48%, and 38%, respectively. Year-over-year, however, the quarterly numbers aren’t so rosy. Sales were up just 1% YOY, while operating profit fell 14% and net income fell 32%.

NCsoft says that its QOQ sales and profits were up thanks to “balanced growth from all major IPs” and that “operating marging reached 32% driven by an increase in high-marging overseas royalty revenue.” Guild Wars 2 in particular “surged” upward in the fourth quarter thanks to Heart of Thorns; NCsoft says GW2 “solidified its position as a main revenue driver by adding on expansion pack sales to stable in-game item sales.” Even WildStar saw quite bit of a bump in the quarter, though it’s down significantly YOY. The Lineage and Blade & Soul franchises are also credited as hitting full-year sales records (and the quarter closed long before B&S’ launch here, which is going rather well already). 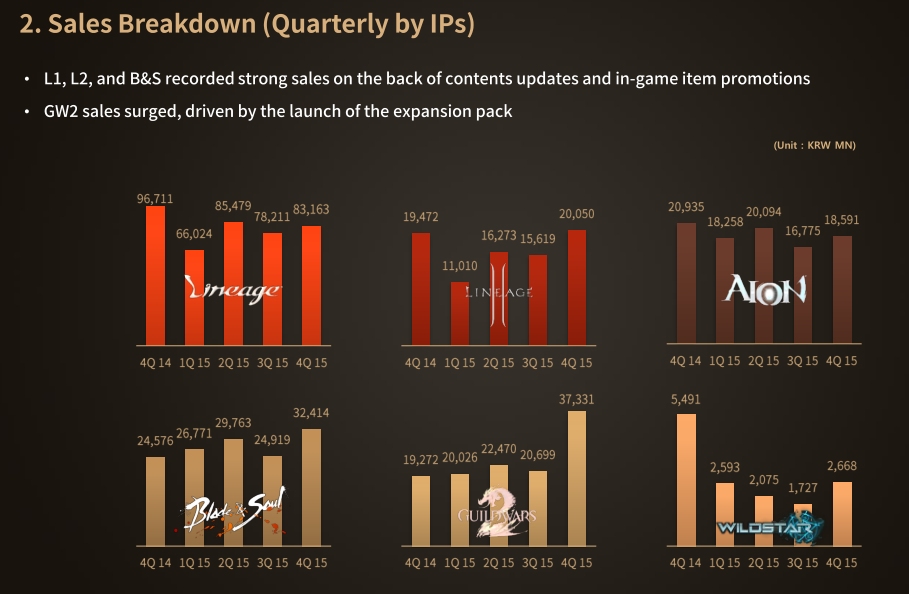 For 2015 on the whole, the company maintained flat sales growth “equal to [its] historic peak of 2014,” with drops for operating profit and net income compared to 2014’s numbers.

Source: NCsoft. With thanks to greaterdivinity!
Advertisement

Cambruin I completely agree. Everyone is an expert, yet they sit and play games other make.  So how much do they really know!?  They just expect all their wants to be fullfilled and bitch at EVERYTHING!

Sylzer Bluetouchpaper Xephyr John Wise
THey are merging PvP and PvE servers in 3 days. Maybe you want to check it out again then?
There is also a major patch upcoming.

Cambruin Carbine overestimated the number of people who wanted that. Don’t speak for all of us. Many of us stopped playing Wildstaer for different reasons.

I don’t get it. This game offered what people wanted. They did not want generic tab-target no-skil hotbar-mashing. They wanted the return of classic WoW-style progression. They wanted big-ass raids. And now they’re lik ‘oh, but they implemented it all wrong’. Did those people actually think twice before formulating their wishes? Did they forget the whole Onyxia-attunement grind? The horror that setting up raid teams for 40-man raids was?

People just don’t know what they’re asking for anymore. We’ve turned into a bunch of teens thinking only in terms of black and white, begging for specifics, but completely oblivious to everything required to get to said specific. The genre has dumbed down, we have and the devs simply picked up on it.

JakeDunnegan It’s not just NCsoft’s games; the whole Korean MMO style is inherently different from western MMOs. Because most people didn’t have computers capable of running a graphics-intensive MMO, the MMO developers entered into deals with the ‘bangs’ (Internet cafes) to subsidize their hardware so that they would have systems capable of running their games. Because of this, Korean MMOs have grown around the play style where you get together with your friends and all go down together to the bang, and play the MMO as a group; individual advancement takes a back seat to progression as part of the group. In the US and Europe, the average MMO player goes home, fires up their computer, logs into the MMO, and either meets up with their guildmates/friends online or plays solo. As a result of this dichotomy, Korean style MMOs are almost always grindfests, with 90% of the content beyond the starting areas requiring groups to complete, and the developers make most of their money off of a microtransaction-based cash shop, while Western MMOs are more solo-based, with group content taking over only in the endgame, and used to rely more on subscriptions than a cash shop, although more and more the Western MMOs are resorting to a cash shop to monetize the F2P players for additional income.

I believe that it’s this dichotomy between Korean and Western MMOs that was one of the things behind NCsoft’s closure of City of Heroes; its design was inherently solo-friendly and less group-centric (as exemplified by the game’s poor performance when ported to Korean and released in Korea), and would have required a major rework to have made its cash shop the kind of income source that Korean MMO developers were familiar and comfortable with — and the redesign would likely have driven away the majority of its player base. Because CoH was not an MMO design that could be made to fit their business model, it was regarded as a ‘peripheral’ property, and with Paragon Studios as a whole running at a loss because of the cost of the second project they’d been directed to work on, a ‘pragmatic’ decision to shutter Paragon Studios and CoH fit NCsoft’s business plan.

deekay_zero i hope it good news for ncsoft because wildstar have alot of potential and with new updates like the new zone, npc voice-over and even now the game have alot of content.

for me wildstar is pure end-game pve fun game.
the only minus was and still is the grinding for leveling to max level and the lack of voice-over + not alot of story cut-scene.

i love free updates but i love b2p expansion more than any free things.
so i think both of the games need expansion and hope arenanet do it better next time.

A Dad Supreme SoMuchMass I’ll be laughing all the way to 2017.