Following Above & Beyond Technologies’ January announcement that it was solving The Repopulation’s HeroEngine crisis by getting the heck away from HeroEngine, we spoke to studio rep JC Smith all about the MMO’s impending move to Unreal Engine and the birth of survival sandbox spin-off game, Fragmented, which is meant as an appetizer in the interim. Read on for our interview!

Massively OP: One thing I’ve seen commenters worry about is that Fragmented could become The Repopulation’s Landmark, and the comparison seems fair — a lot of the effort going into Landmark should be applicable to EQ Next too, theoretically, but that game is dragging on seemingly forever without public development. Are you concerned that the length of time it takes to rebuild The Repopulation will age it out of the market by the time it’s ready?

JC Smith: The hardest part about making this change for us was mainly the time frame. We kept hoping something we could find a way to get the Hero Engine version of the game to market, because the last thing we wanted to do was to set the game’s time frame back by a significant amount of time. After the situation had stretched out for a while though we realized that an engine switch was our best option, despite the set back in time frame. It is something that we took very seriously though.

When we started building Fragmented, we did so with the intention of most of its code being reusable in The Repopulation. It’s almost like a snap shot of the game in an earlier stage. If we snap shotted Repop before it was an MMO, before it had an RPG Mode, without NPC cities being erected yet, and at the start of the landing rather than generations later you’d have Fragmented. The harvesting system, crafting, combat (Action Mode like), inventory, chat, construction, etc systems are the same systems that you’ll see in UE4 Repop, minus some complexity. Crafting, for example, will have more features in Repop than it does in the more simplified Fragmented, but it will be molded from the same clay. It helps of course that Repop was a crafting-centric sandbox, as this translates well into a survival game.

The big difference is that instead of asking players to wait until the end of the year to see a Repop complete with quests, NPCs, etc, players will be getting a chance to play the more survival-geared and slimmed-down version of it very soon. We plan to begin opt in testing near the end of the month and to have it out to the general public after GDC. We then will be taking a more modular approach to Repop, which we plan to have back in testing by the end of the year.

I know you guys have said you’ll support both of these games once they’re both out alongside each other. The question is – how? Won’t that take a lot more money to run two live teams (or work one live team twice as hard)? Should players be worried that eventually support for the less profitable or popular game might slip or slow down?

Much of the code will be identical between the two games. Repop starts with the Fragmented base, and then will add additional features on top of it. So in that regard we don’t feel like we’re losing any time in the short term. In the long-term they will separate a bit more as Repop will have more complexity and some features will have additional detail in Repop that wouldn’t make sense in Fragmented. But we’ll be sharing a lot of code between the two and the programming team will be touching both sides. The modding kits will also be similar, so players who are created mods or custom servers shouldn’t have a major problem porting their modifications between the two games.

Feature wise there is of course a lot of extra work that you need for an MMO as opposed to survival game. But the biggest time consumer in building an MMO is the content. You don’t need a mission team on a survival game, or to develop much lore. Survival is purely sandbox. You do need that in the MMO. The rest of the team will likely be splitting duties between the two. We don’t anticipate this being a major issue though, the additional funds we bring in from Fragmented will allow us to bring on additional help.

We think Fragmented is going to do very well. And we’ve heard some concern from Repop players that if it does well we have less reason to be dedicated to The Repopulation. While we certainly understand those concerns, we do want to stress our commitment to The Repopulation. A lot of us have dedicated years of our lives to the game. We believe in it more than ever right now. I can’t overstate how excited we are about the prospect of a moddable MMO which supports player created servers. We think there is big potential there.

Do you think of Fragmented as a potential rival for games like H1Z1 and ARK, or do you really not care all that much whether it makes money as long as it keeps Repopulation’s loyalists happy? What do you think will set Fragmented apart from the currently existing (and inbound) survival sandboxes — what does it have that they don’t? 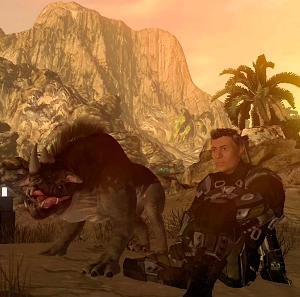 We view it as both. The truth is with an extended time frame for Repop, we needed to find a way to generate funding, and we did not want to go back to Kickstarter or to ask our existing user base to kick in more money. Fragmented will be given away free to all Repop owners, but once testing is complete we’ll also open it up to the general public and it will be used to fund the extended development time on The Repopulation, while also making up much of the base code for Repop. But we are also sold on the idea that Fragmented will appeal to a lot of survival players. It already supports all of the features that you expect from a survival game but in a pure science fiction setting, and we’re having a lot of fun in internal testing.

Construction is closer to Repop construction though than the wall per wall method you see in a lot of survival games. You’ll be placing pre-built structures and props rather than building one block at a time. It uses a skills system for advancement. You’ll be able to genetically engineer pets, and drive around in multi-passenger vehicles. You’ll gain access to higher tech weapons pretty quickly, all players begin with the ability to craft pistols if you can acquire the resources. You start off being able to do a bit more as you begin with 1 point in each skill which allows for 14 different recipes right off the bat, but there are many more that you can obtain as you increase your skill lines. Although the crafting system is simpler than that in Repop, crafting and harvesting are huge parts of the game. VR will also be supported.

Unreal, you’ve said, will allow you to do things in The Repopulation that you couldn’t do in HeroEngine, like destructible stuff and GPU scaling. Are there any downsides specific to the engine itself? Is there anything that will be difficult (rather than just time-consuming) to port over, to the point that mechanics might be cut from the new product?

We love the engine. It’s still amazing for us to see how far we’ve come in so short a time with Fragmented. It’s close to feature complete with less than three months development time, and the engine has a lot to do with that. There are of course some things we miss from Hero Engine, in terms of the more MMO oriented features, though we do have previous experience in integrating MMO features into a non-MMO engine with Torque 3D which is useful. The thing we’ve missed the most to date though is just the collaborative world design and repository systems. Those are areas where Hero Engine still shines.

We don’t plan on cutting any features from Repop, though we do plan on giving everything a look as we integrate the new modules. We also don’t anticipate that anything will be a major challenge in porting. It’s a lot easier to recreate systems after you have the previous experience. One of the things that tends to happen over time is that you tack on features in response to things you didn’t expect, or to correct problems that other things are built on top of because you don’t want to rewrite an entire system. One of the more fun things about a fresh start is that you can tweak your new designs more easily. The spirit of Repop isn’t going to change, though. It’s just going to be shinier, and moddable. But that doesn’t mean all features will be exactly the same as before. Now is a perfect time to give a hard look at player concerns with certain features. And the modular approach to adding features into Repop will help a lot there because you’ll see a patch that adds X feature and that will be the major feature (or two) and focus of that patch. We didn’t have that luxury in Repop, because our testing base was very small for most of its development cycle. We had a lot less eyes on the game in the formative stages.

The Amazon engine release was a bit out of left-field. Did it sway you at all, or are you set for good on Unreal?

It was surprising and should be another good option for indie developers. It’s a great time to be indie right now. Had it happened a few months earlier we certainly would have given it a look. But we’re happy with Unreal Engine.

We’d like to thank JC Smith for his candid answers. Good luck, A&B!