If you haven’t heard of RuneScape’s upcoming card game, you’re not alone. Even when it skittered across my desk last fall, it largely escaped my notice and I missed a chance to check out the closed beta (something I quite thoroughly regret now!). The devs have kept Chronicle: RuneScape Legends pretty far under the radar. However, word is getting out now. This new free-to-play CCG opens its beta doors on March 23rd, and soon everyone will have a chance to see what its all about.

And what exactly is it all about? Why should people take notice of yet another CCG/TCG that is coming along amid the horde of others? Besides the obvious tie to RuneScape that fans are sure to appreciate, there’s a unique twist to this game that sets it apart. Think card game meets board game sprinkled with RPG. Even though closed beta has officially ended, I had the chance to play it for a while as well as chat with Senior Producer Mark Killey and Lead Designer James Sweatman at a press event in the UK last week. And I am looking forward to playing Chronicle again when open beta starts!

Admittedly, the whole card game thing is pretty new to me. With the exception of EverQuest II’s Legends of Norrath, which I log into simply to open packs and get in-game loot, I’ve had nothing to do with the whole genre until very recently. Now that I have dabbled in and enjoy the game I play, I had no interest or reason to check out any others. Then I saw Chronicle. 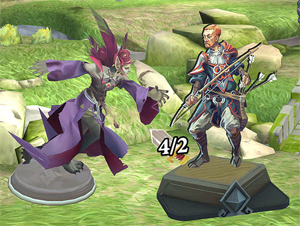 The very first time I set eyes on Chronicle: RuneScape Legends, my interest was piqued because you do not play on flat screen surface like cards on a table; you play on a three-dimensional game board on a 3-D table! If you have ever used miniatures and hex maps in tabletop gaming, you will be able to easily envision the set up, except that Chronicle has much more elaborate environments than I’ve ever used. It also brought to mind the board game Talisman. There’s a reason for that: When I asked, devs admitted to playing it, and the actual development of the system was first done using paper pieces laid out on a board — just as in Talisman.

On top of the board setup, you have your Legend (the term used here for your hero/character) figurine. It moves along the board, whacking the foes or interacting with the friends you place in front of it. In effect, you are composing your own quest lines to complete and gear yourself up before the final PvP showdown. The animations are very simplistic really; the team told me that the idea was for it to retain the look of being a tabletop figurine. But the fact that your character moves along through the match actually encountering things was fun. Even better was watching your life-sized opponent on the other side of the table keeping an eye on the progress of his or her own Legend! Let me tell you, when that big tank Raptor is staring down his piece, I could feel his tension. I would have sworn he was going to flip the table and send the game pieces flying when he lost to me (a suggestion I happily gave the devs to add even more to the experience).

Create your own path

Another really intriguing aspect is something I’d just mentioned: the fact that you place your friends and foes along your own adventuring path. The devs explained that the idea for the game was actually born from the thought of making quests for a character to complete instead of making a character to complete quests. And they felt the best way to do that was with cards.

Each match has a number of rounds, and for each round you select up to four cards from your hand to place in a specific order for you to encounter. You can put cards in place to give you gold, health, armor, or whatnot as you move along, or place cards that will take those same things away from your opponent. You must pick your strategy and place all the cards before action begins, then you sit back and watch how it all unfolds. Oh, and you have to do it on a timer, so you are working under pressure.

Although you do fight your own cards, you also have to account for how your opponent’s will affect you as the round progresses. For instance, you might need two gold to hire a hit on your opponent, so you place a card that when defeated gives you two gold before the card that requires the two gold. Unfortunately, your opponent might have perfectly placed a card that steals your gold before you get to that next card; you won’t know his or her cards until all cards are placed and the battle commences. I must admit that I killed myself my first match before I ever reached the final battle of Legend vs. Legend because I didn’t yet realize how all the mechanics worked. (There is a small tutorial, and those more versed in TCGs are sure to pick up on the nuances much faster than I did.) Even so, the combination of unique aesthetics and different gameplay made me eager to try again, and keep trying. I might have even challenged other folks to matches.

While there were about 50K players who participted in the closed beta, no one has experienced all there is to the game. As open beta progresses, the game will experience major expansions in all areas. Two new Legends will be introduced with their own unique cards: Venescula the Vampyre and Morvran the Slayer Master. (Come launch, eight Legends are expected, the final two from RuneScape Classic.) Legends will also be more customizable with a collection of armor skins that can be unlocked through gameplay or purchased from the store. These customization unlocks will earned by gaining XP for specific Legends through the new skilling system. Another type of customization will come in the form of titles and and emblems you can display. On top of all that, there will be leaderboards, new regions to play on, a campaign world, and more.

Based on player feedback, the crafting system — the major way that players will receive new cards besides gameplay and opening packs — has been improved. Crafting is an important factor since Chronicle is not a TCG like so many other games; there is no trading involved or even possible. Players can only dissolve their extra cards into components that can be crafted into new cards.

Another new feature will be dungeoneering, modeled after RuneScape’s feature that strips players of all their personal belongings and sends them on a dungeon crawl with specific skills. This new mode will involve a draft deck instead of a pre-constructed one, pulling players out of their comfort zones with their favorite builds. Essentially, players will “craft a new deck on the fly” and experience the game with new combinations that they may not have tried before. Every single card is unlocked and available for this random deck, even cards that players haven’t yet earned in regular play. The goal will be to win a certain number of matches in a row — clearing your dungeon — in order to get a prize.

Once beta opens, RuneScape fans, CCG fans, and even tabletop gaming fans owe it to themselves to check Chronicle out. It is different enough to add something new to the gaming sphere, and who doesn’t want to try out the shiny new toy?

Stay tuned for one more RuneScape reveal later today, get caught up on all our pieces right here:

Previewing Chronicle: RuneScape Legends ahead of its March 23 beta
Disclosure: Travel and lodging for this press event were provided by Jagex. Endless flight layovers were provided by the good people of Newark, New Jersey.
Advertisement

Here is a direct link if you are interested in sighning up. https://www.rschronicle.com/

“Stay tuned for one more RuneScape reveal later today, get caught up on all our pieces right here:”

Oh my, got any hints? It seems like Jagex is holding some kind of press event, huh?