END_OF_DOCUMENT_TOKEN_TO_BE_REPLACED
Are you ready to enter the labyrinth? Last November we learned all about Path of Exile’s unique gameplay experience that will opens its doors in the next expansion, Ascendancy. Since that time, we’ve slowly learned about many of the 19 specialization classes that will also be introduced when the expansion launches in two weeks. Today, Grinding Gear Games’ Producer Chris Wilson shared with Massively OP the details of the 18th Ascendancy class: the Chieftain. What’s so special about this class? If you are a Marauder and you really, really like playing with fire, it’s tailor-made just for you. More than that, it’s the class that is specifically built to use the new totem skill. 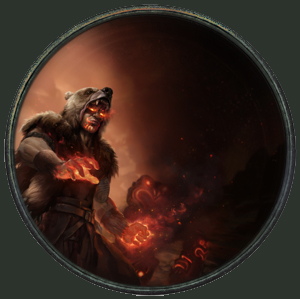 Flinging fire about all willy-nilly usually falls in the realm of wizards and warlocks and other such casting classes. But why should mages have all the fun? With the Chieftain, a big burly Maurader can incorporate even more incendiary skills into his build and truly set the world ablaze. Players who choose this Ascendancy class can go even further than that; by focusing on specific skills, players can actually turn themselves into pretty much a pure spellcaster that lights the world on fire form a distance instead of just causing fire damage upon melee hits.

Wilson shared with us some of the thematic idea behind the Chieftain, a tribal warrior who invokes his gods to give him power. While he looks a bit like a shaman with his bear headdress, the feel of the Chieftain is actually based on Maori/Pacific Island culture. Even the names of the skills are meant to be reminiscent of the language, although Wilson noted that the team was very careful to be respectful of the culture, consulting with an expert in New Zealand on Maori and Pacific Island culture to make sure the team wasn’t inadvertently offensive with the skill names.

Wilson noted that while the other Maruader specializations — the Beserker and the Juggernaut — are pretty self-evident in how they play, the Chieftain is more subtle. “The designers have been tricky with this class, trying to embed lots of cool combinations so that when players read it, their minds go crazy trying to work out all the different things they can do,” he told us. One example he cited was a self-fueling skill combo. He also detailed how one would become a marauding spellcaster: First you buff up your strength with the Tawhoa, Forest’s Strength skill, then you use Iron Will, which causes strength to give bonuses to spell damages. Beyond just skills, Wilson explained that the totems synergize well with the spellcasting focus because the one Chieftain skill makes all totems become decoy totems, not just the specific totem designed to be one. The totems then distract enemies while the player blasts away.

As for the totems themselves, Ascendancy is introducing a new type of totem that is melee-based. The first one was just announced, and Wilson described it as a totem with an ancestral warrior tethered to it inflicting damage on anything that gets close. He added that two more melee totems are in the works, but they may not make it in for the expansion.

Wilson described the challenge of developing PoE now: “We want to make it easy at first glance to work out what to do so new players don’t struggle. But at the same time we want there to be hidden depth that experienced players can say, ‘Oh that’s really cool!’ and go do something non-standard.” The possibilities that the Chieftain presents appears to offer just that. Here’s a breakdown of all the Chieftain’s skills. You can also see each of them in action in the video below. (And for a sneak peek at Ascendancy, be on the look out for an OPTV stream next week to show things off!)

Arohongui, Moon’s Presence: reduces the damage the enemies near your totems do to players while also increasing the physical and fire damage done to them by the player.

Tukohama, War’s Herald: makes totems tougher with armor as well as an immunity to fire damage. Totems can also taunt and then deal damage  to nearby enemies when hit.

Tawhoa, Forest’s Strength: is focused more on defensive benefits, increasing the players armor, elemental resistances, and strength. Mana costs are also reduced. (A favorite skill for those using Iron Will to change strength to spell power.)

Ngamahu, Flame’s Advance: gives players the chance to ignite foes and then increases damage dealt to all enemies that are engulfed in flames.

Lheiah What breetoplay said basically.
So in poe;
1-5 for pots
WASD for movement
And on top of that you have to aim with your mouse and use secondary skills with some other buttons, Q E R T, probably.
Besides you can’t move and do a skill on the same time anyway so it might be really really weird and straining for your left hand.
For example, you want to use granite flask, life flask and quicksilver flask because you almost died, while also backing away and use whirling blades.
So you will have to at least push 1, 2, 3, S (maybe A+S for diagonal movement) just to back away(Try doing that in the same time), instead of just point and clicking away while spamming pots with left hand.
Answer; it would be ridiculous to have WASD in PoE, I don’t see how it’s any problem at all. It’s a computer, it has a mouse, use it.

Lheiah The only ARPG I ever played with WASD movement was Victor Vran and there only because it makes wall jumping and quick-dodge easier. I really don’t see the point of it. Every since Diablo 1 this control style has been the norm, only recently (I suspect with the porting of ARPGs to consoles) have there been a few that offer WASD, which is essentially the keyboard equivalent to dual-stick?

Can I just say that I am SO pleased with the layout of this class reveal on massivelyop? The other exclusive sites were horribly organized and a such a pain to wade through. Such a hype killer needing to sit through a stupid video just for the chance to squint at the talent trees.

I hate when information is buried in video with no summary! ><

Kudos to you, MJ, and thanks for the reveal!

Lheiah so how would you prioritize an enemy with the mouse, move and choose skills?  You’d need three hands to do anything past easymode.  You could tab but you’d just be making it harder on yourself for the sake of being contrarian I guess.

Lheiah It’s one of the reasons that I prefer D3 on console VS PC.

so… still no pants?

breetoplay Lheiah I have never had great luck with wasd movement in fixed camera games where I sometimes need to quickly move diagonally.  (for example, Bastion is a great game, but oh my goodness I fell off narrow diagonal walkways so many times!)

BDO, Warlock Class in BnS, and Acendancy all at the same time!  It’s like the universe is trying to make my brain have a melt down.