The Division launches next week, and you know what that means: Everyone will be asking, “What’s next?” Ubisoft has already planned out an entire first season of DLC content that will kick off later this month.

An astute Redditor spotted a season pass page (in German) with plenty of details about the upcoming patches. There will be three “expansions” in the season: Underground, Survival, and Last Stand. Players who buy the whole season will get extra gear like a sawed-off shotgun and outfit skins.

If you’re curious about how “accurate” The Division is in representing the collapse of a major city, you might want to read up on this interview with investigative journalist Dr. Nafeez Mossadeq Ahmed. He has several interesting insights into what would actually happen as well as some insider info regarding the game’s creation (such as the difficulties in using iconic landmarks like The Empire State Building).

You can eyeball the season one info page after the jump. 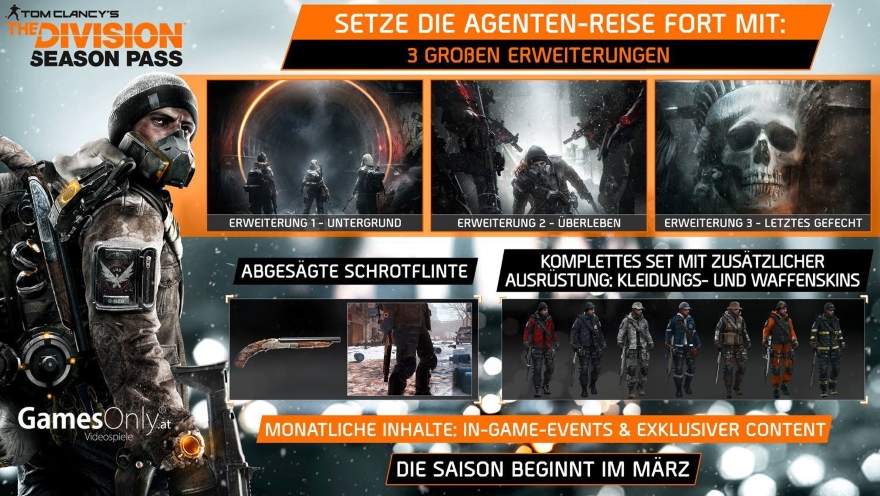 I have an extra code for The Division for PC after purchasing the Tobii Eye Tracker. I have already purchased the gold edition so I have no need for this code. I just started streaming, I feel like this is a great game and looking to give back and help someone out that may not be able to afford it at the moment because of real life or whatever the situation. I am just looking to have a little fun with it and possibly earn some new viewers in the process.
The rules are as follows:
1. Follow my stream
2. Be a viewer on March 6th at 9pm est
It will be a completely random roll with all the viewers watching at the scheduled time. Good Luck and hope to see you guys around.
Twitch.tv/geezy_gaming

“Season pass” is another way to say “12 month subscription”.

Smiggins solipsis You can partly blame those awesome graphics for the need to make it mostly a lobby shooter.

Mosely mysecretid As is the need for a serious rig that you can’t just buy off the shop shelves. The demands to run Dark Zone combat in full graphical settings are monstrous.

Mosely
As above, here’s hoping …
Cheers,

solipsis  The game seems like a glorified lobby shooter to me.

So this game is basically Destiny but in contemporary abandoned New York clothes?

Yangers Does it exist in a finished form?

Funny how Ms. Potato is always wearing a mask on TheD screenshots (all I’ve seen). I guess the devs don’t want to scare the public with their female models’ facial features.