What do you get when you remove an MMO community manager from that position and give him free license to talk what really goes on behind the scenes without the PR gloss? You end up with someone like Tonka, a former TERA community rep and “Event Specialist” who has uploaded a rant video on how studios devalue customers and community relations. Also, he targets marketing as a “necessary evil.”

“Companies frequently and obviously apply community management as an afterthought to their total business plan,” said Tonka. “When you’re creating a product, you also have to consider the customer. This is really not an unusual thought in business, but I feel like it gets lost in the games industry all the time and especially in MMOs.”

You can watch Tonka’s entire 11-minute rant below. 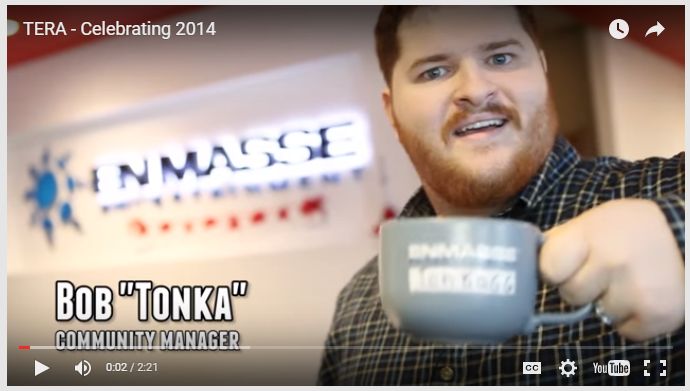 For me it would be kind of a dream job to be the PR person for a big-name MMO, I feel confident I could find ways to engage player base with trivia or updates or information or polls on a daily basis.
What would suck is having to fend off the forum trolls who scream about “pay to win” or “class balancing” or stuff that you read in the forums.
I don’t think any game is devoid of complainers. There’s always a loud, vocal minority who declare the game utterly broken, bad, evil, naughty, greedy, etc.

Sometimes I think just banning them is the best move.  There, that oughta get me a job somewhere.   :)

Karl_Hungus ManastuUtakata Damonvile
Just look for the Elin Sorcerer with the ultra-liberal pink pigtails. I’ve occasionally posted her on the One Shots for reference. <3

Leilonii breetoplay Dnote omglazerkittens The title matters on a practical level because En Masse asked for an article change that contradicted some of its past representation of the employee, which was a roundabout way of putting us in the middle of a liar-liar-pants-on-fire since his Twitter stated he’d been a CM.
It matters on a contextual level because some people have literally discredited him and his opinions because he “wasn’t a real CM,” which I’m sure suited En Masse just fine.
And on an ethical level, we wanted to get it right and understand it too.

Cyroselle Karl_Hungus Damonvile
Could you log back on and co-manage it enough to send me an invite? I am looking for a guild to call home. And one without Elin creepers. I’ll try to keep my tongue and pigtails secured on my views if that’s an issue. Much appreciated in advance. /bows <3

jeremy2020 Midgetsnowman ApathyCurve More of an ironic contrast (read: sarcasm) than a strawman fallacy, I would think.

thatchefdude yukonsam01 Truth. Hell, some of our guild members are clear into their 60s. That used to be rare, but it’s becoming more and more common. Playing video games with large online communities sure as hell beats crossword puzzles and coddling tiny dogs post-retirement.
I’ve even noticed the local video arcades are starting to fill with elders hanging out, playing video games and chatting away with a great relaxed atmosphere.
Developers and publishers ought to straighten up their act.

Well, I’ll avoid my rant and sum up a few things.

-It doesn’t matter what his title was while working on Tera.  His opinion stands on its own merits.  Funny that Tera seems to care though.

-Good vid and not really all that critical.  An overview and opinions based on experience.

-Is he right?  Yes, and no.  He glosses over a few of the business details, and seems to misunderstand Marketing.  But he is right about the “passion”.

-The Quality versus Quantity debate is not new in business.  They are two different roads and are mutually exclusive most of the time.

-Customers are a big part of this problem.  They sap the passion too.  Customers expectations and entitlement are not easily managed.  Communication is not enough.  Communities have been spoiled and act like spoiled children.

-Solution? Niche marketing of a product designed with quality and passion.  A good foundation setting customer expectations and clear direction on goals to achieve what is expected.  A strong CM that leads and does not bow down to the vocal minority.

One Shots: Imitation and flattery

EVE Online shares its economic report for January 2020 and hands...

The MOP Up: Coronavirus concerns are impacting PAX East 2020

Torchlight III discusses adjustments being made to combat, skill progression, and...