This afternoon, Ubisoft will stream the first look at its next free update, Incursions, due out in April. 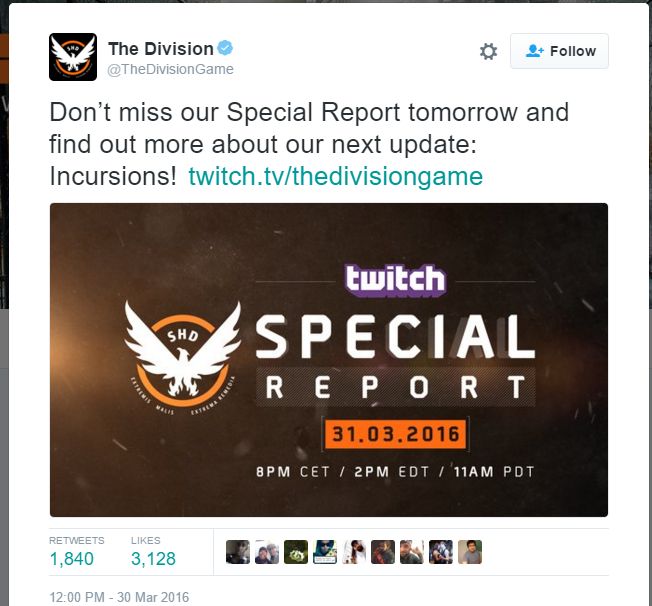 Incursions are essentially challenging 4-man endgame PvE content, so if the PvP-oriented nature of last week’s patch didn’t do anything for you, maybe this PvE-centric update will.

Falcon Lost has two difficulties: Hard mode, which is recommended for players whose gear score is equivalent to level 31; and challenge mode, which is even tougher. Also, there aren’t any checkpoints in Falcon Lost; if your team goes down, you’ll have to restart from the beginning. Additionally, you can replay Falcon Lost and other upcoming Incursions as many times as you want and still be rewarded with new loot.

There’s also new trading mechanics, new activities in the Dark Zone, a ton of new gear. The level cap is NOT increasing. The patch is due out April 12th. As for what else is on the way…

Incursions will later be followed by another free update, Conflict, which adds a special incursion into New York’s Columbus Circle, as well as new Dark Zone features. Additionally, three paid DLC expansions are planned throughout the year – Underground, Survival, and Last Stand – which introduce new areas and threats to The Division’s open-world New York. Xbox One players will have 30-day exclusive early access to Underground and Survival, although Incursions, Conflict, and Last Stand will debut on all platforms simultaneously.

I do t use those nearly as much as I should. Prefer th be further away. I take it this is THE gun to get? Mission drop?

It’s killing me. I want to be all up in this game.

I’m not really digging the PvP in this game. So I suppose that’s good.

GoJammit The FoV of this game is way too narrow. It doesn’t make me sick, but I would still pull the camera away if I could.

Cavadus Public events I would be okay with, but I have no desire to start organizing giant parties for a game like this.. Doesn’t really make a whole lot of sense.

Damonvile is that a weapon?

Dais waybe they will patch a season. I don’t think the scenery is going to change that much.

Because I’d have nothing to wear!. That that bastard in the base overcharges for clothes.