Crowfall devs confirmed today that they are indeed working on the Druid archetype. In fact, ArtCraft’s goal is to integrate the Druid into the Hunger Dome and Siege Perilous testing phases.

“[The Druid] is really starting to look great!” writes Design Lead Thomas Blair in a dev blog today. “The base equipment set is done, the character is all rigged and ready to start integrating into the game. That means we’ve started creating all of her alternate armor sets, designing her powers and crafting both her unique animations and her spell FX.”

The Druid plays like a ranged healer and ranged nuker, but Blair argues she isn’t a “firehose” healer.

“I said we don’t have any ‘firehose’ healers, the kind that a party might need to take on a boss monster at the end of a dungeon raid. However, we do have support classes, like the Legionnaire, that can be instrumental in helping your team be more effective once deployed on the battlefield. The Druid is a lot more versatile then your traditional PvE firehose healer. When we were designing her power kit and thinking about her thematically, having two trays made the most sense.” 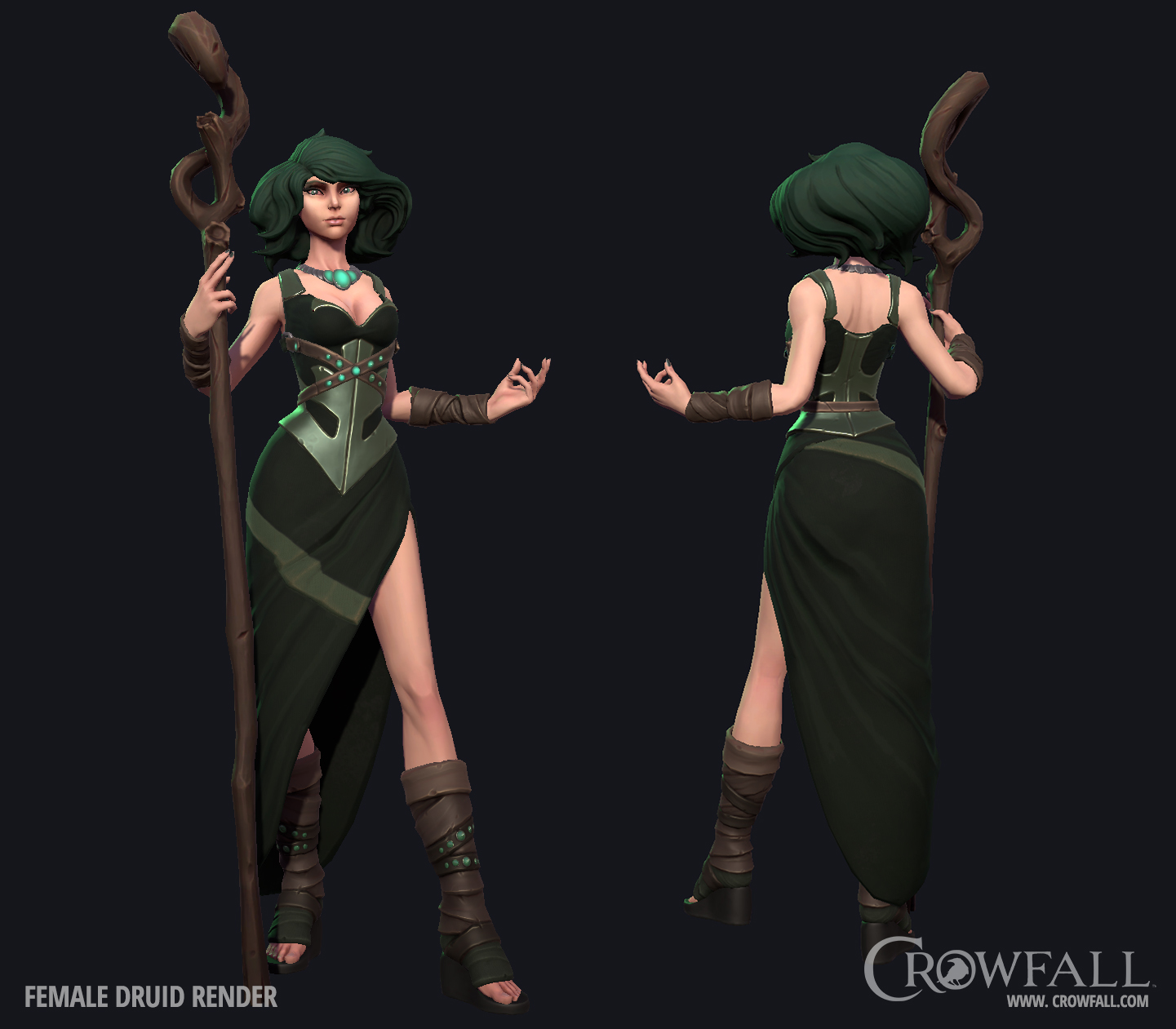 Lights_andMusic Ideally December of this year, I think ACE is on the right track with this one so if it bleeds over to Q1 2017 I am okay with that if they get it right

Radfist Francis courant Handies PurpleCopper Yea I agree, it’s mostly speculation at this point but can always dream! Also combat pets were a stretch goal during Kickstarter and it’s been achieved, so we should have wolves and other animals on the battlefield. =)

Rynn I don’t know about other MMORPGs, in Crowfall however ACE has made the choice to make combat light on healing for 2 major reasons if I’m correct: 1) make combat more deadly , 2) it’s PvP-oriented and there’s no dungeon boss that takes 30 minutes to kill, so a “fire hose healer”, as they call it, is not necessary.

Crowfall is a game focused on team play: the winners of the Campaigns will probably be the most powerful and organized Realm/Faction/Alliance/Guild. Solo players can do a lot of things, but they will probably want to interact with players anyway because it’s a player-driven economy with no auction house nor magical object teleportation: players must collect material, craft the item, transport it physically in the world and then sell it to another player. So the combatants / haulers / traders / crafters loop is going to be very important even for solo players.

When I take a look at the 5 archetypes in the test so far, I can’t really see any of them being extremely efficient solo. The Ranger can hide and ambush a target, but it would probably have trouble to solo a Knight or any other melee archetype. It could be great vs. another ranged DPS or support class possibly. The Knight or Legionnaire damage output is relatively low, so try to solo vs. a Champion or Confessor would probably get them in trouble, depending on the situation. Archetypes are mostly meant to work together in groups, whether very small or larger, but solo probably isn’t the most effective solution, especially not to win campaigns.

I love healers. They’re my favorite role to play in pretty much every game I’ve played. However, I’m seeing the same issue here that almost every game in the genre makes.

Why must we tack DPS skills onto every single class?

Is there some fundamental problem I’m not aware of us of making a class do one thing and do it well? I play healers because I enjoy healing. If I wanted to DPS I would play a DPS class. Even FFXIV, whose WHM is far more focused that much, can’t help but throw a gd AOE DPS ability at you as one of the main abilities you receive.

My best guess is that it’s mainly a system of the single-playerization of the genre. Everyone apparently needs to be solo. If only there were some sort of group play so that we could focus on our respective strengths…

This is amazing, good job AC.

Lights_andMusic Francis courant I was surprised by how polished the alpha client was. I think the team is well organised and in a good position to deliver on time. One of the most professional kickstarter projects I have followed.

Francis courant Handies PurpleCopper True, although that could just be destructive nature magic or a summon.

Yassss! I love my Fury in EQ2 and this sounds right up my alley.

Outriders is a sci-fi co-op shooter with elemental superpowers arriving to...

Classic EverQuest PvPers plan a protest to agitate for a PvP...