When I shared my first impressions of Landmark’s big spring update, I admitted that there was sadness to be had, but I also noted that the one aspect of the update that I was most looking forward to but hadn’t yet found time to delve into. And that time is now! After my first excursions around the lands, I settled on a nice little piece of beachfront property and was finally able to start checking into the (hopefully first iteration of the) new story system. And even though I have only dabbled so far, I am very excited for the possibilities. That’s not to say that there isn’t room for improvement; there are some downs as well as ups. But this is a huge leap forward on the road of realizing this game’s potential. Let’s just hope the train of progress doesn’t stall here. 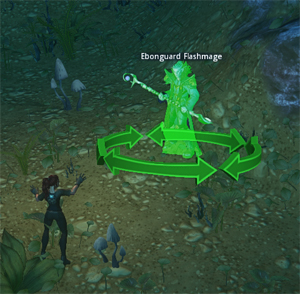 The ups: Easy peasy and fun

The good news is that it is really easy to get started. If all you want to do is build stories and dungeons for others to participate in, you don’t have to wait until some magical level — or worse, endgame — to start. In fact, after less than 15 minutes of harvesting, I had obtained three really cool spawners to add to my collection. And that’s on top of the set of native mob spawners that you start with naturally. You also get a free building site right off the bat and can build some snazzy things with just the provided templates (which happen to use the free stone resource, making it unnecessary to farm endlessly for building materials). This means you can start your first dungeon in less time than it takes to make a cup of coffee.

Now, making a good dungeon might take a bit more time, but let’s not get too picky! Practice will make perfect.

An important distinction that really benefits players is that you don’t actually get these spawners as loot items: They are recipes. This means you can replicate any number of spawned mobs, up to your claim’s max, once you have discovered the recipe — as long as you have the necessary ingredients, that is. There’s no need to try for a second skeleton with a sword to use as deadly bookends in your spooky library. These crafting components are not that difficult to obtain, either, and can be rounded up fairly quickly from harvesting whatever is nearby or even traded for. You can conceivably fill your first dungeon within minutes.

But what if you want more variety? If you don’t mind sashaying through a bit of gameplay, there are a variety of ways to obtain different spawners. You get awarded certain ones for completing achievements, you get them as loot from running other people’s dungeons, and you get them from randomly harvesting. Yah, I was a bit surprised when a got a cool mage out of a tree I was chopping! But hey, who am I to judge where a mage wants to hide, eh?

Even if you don’t want to build a dungeon, this new feature gives you dungeons to run built by your fellow players. I obviously haven’t had time to run through and test every creation that is currently being built, but I have sampled a couple and found them to be quite fun. My neighbor has a little crypt scenario called Burial Chamber going using just the templates and a few skeletons he has gathered, and it is a blast… literally actually, considering he placed fiery fungi there to blow you up. But that’s beside the point. The point is I had a lot of fun experiencing the beginnings of his dungeon (by fun I mean the adventuring part and getting surprised by his awesome boss, the combat actually feels worse than before and respawning on my own claim when I died was the pits), and I am eagerly looking forward to adventuring through it again as it develops further. I am also happily anticipating runs through many more player creations I find out in the world or through the gallery. And we can’t even measure how excited I am to make my own!

Another up that I am extrapolating here is the continued hope for more races in Landmark. Just look at the variety of races we are seeing in the spawners: I, myself have a Dark Elf and a bird-like Scalewind Chiller. If the races can exist in this fashion, why can’t they be playable? 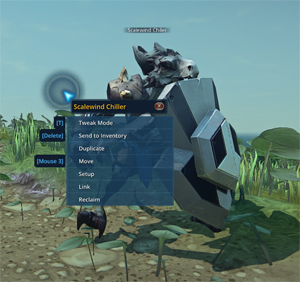 Where there is an up, there is invariably a down. In the case of Landmark’s story system, it’s in the fact that using the spawners is not as easy as obtaining them. Sure, you can place them without much trouble. The menu on the build UI is labeled pretty clearly and there is no need for any special machinery to craft them. You can even filter your prop menu to display only those things you can actually craft, so you aren’t taunted by those things you don’t have resources for. Then you just click which one you want in the prop list, swivel it around how you like on your claim, and place. (Note: You cannot adjust the size of the mobs you create; devs said going that route broke too many things.)

Sounds easy, right? Well, that’s just the beginning. The not-so-easy part is actually making use of your spawners in a creative way. Once you place your mob, you decide whether it is friendly (helps players), neutral, or hostile (attacks players and any friendlies). Again, not too difficult, though you need to take care how close you place your hostile and friendly mobs because they will just start a bloodbath without any players about. The most difficult part is getting into the scripting possibilities to make your dungeon really come alive.

I have to admit, that even through I am familiar with the linking and triggering system, I didn’t find using it on the spawners to be very intuitive. In fact, what I expected to be a walk in the park for me turned out to take quite a bit of time. I thought, Wow, has it been so long that I have forgotten the basics? But once I thought that, I realized that new players who just jumped into the game in order to build these dungeons would get even more lost trying to use this system.

First, you’ve got to go to a replicator crafting machine in order to refine wood into the cut wood needed to make the story items. That was my first snag. If you didn’t make your own replicator yet (I didn’t), you will need to now or run back to a portal to use the public one there. Then, once you place your story items, you have to link them up and give commands. Here’s where I hit another snag: Even though I had used the linking and triggering previously, the commands were far from intuitive and less than clear. It’s going to take some extra familiarizing to get things to act the way I want. And between my friend and I, we haven’t gotten the logic gate to work as expected yet.

Also, bugs. There seems to be plenty of them, like mobs not following the scripting they were given and fleeing to your own claim instead of the dungeon you are playing through. Hopefully, those will all be sorted soon.

Honestly, part of me likes that there is some depth to this, but the other part thinks about those folks who just wanted to jump in and try to create a bit of gameplay for others. There’s got to be a way to make things clearer so that players can get the hang of populating and scripting their dungeons without getting frustrated. To help in that area, a future EverQuesting will be a guide to scripting your new mobs!

Azimn melissaheather oh, it will never happen.  SL blows it away in building capabilities, tools, features.  There’s about 65K people online at any given time in Second Life.  Landmark .. more like 165.

Equilibrium31 Dito the sooner they crash and burn the better I’ll feel if I’m honest.

MJ Guthrie Damonvile IMO, combat needs 5 abilities at a minimum to be interesting. Also, I hope Daybreak puts more monsters into the wild sooner rather than later…
If the Devs could make combat and exploration interesting; it would go a long way towards me fighting/exploring and gathering resources to give to the builder types.

When you create a character, you can select from a couple of gear choices. But, they’re just that, armor and a weapon.

I’m looking forward to reading more about this. I was a fan of the Dungeon Builder in EQ2 and finding things to place there was part of the fun for me there. I can’t run Landmark on my current computer (plain office laptop), though.

I also really wish they could add more storyteller features and bring back the Builder in EQ2 some how.

Janio2 Coldrun_MN Are you sure that’s still true?

I thought they had 4 classes now? (Admittedly, I may have dreamed that up.)

Coldrun_MN There is only gear and weapons no classes.

melissaheather I fell the exact same way. I would love it if Landmark could give Secondlife a run for their money all of those options plus a fantasy setting should be a hit.

This may be a silly question from someone unfamiliar with Landmark, but it sounds like you can create enemies and dungeons in this game.  Who fights them?  Is there a class system for the characters you build?

The Division 2 outlines overhauls of Recalibration and Skill Power systems