END_OF_DOCUMENT_TOKEN_TO_BE_REPLACED
Atlas Reactor, Trion’s turn-based, MOBA-esque PvP game, just finished up its final alpha testing this past weekend, and today, the studio officially kicks off its closed beta. Before I tell you how you can get involved in the beta, you should have a good understanding of what the game is about and what is different about this beta build versus the previous alpha build. I spoke to Senior Producer James Karras and Lead Designer William Cook to talk about some of the gameplay cleanup and additions coming in closed beta — specifically, a new freelancer and seasons. 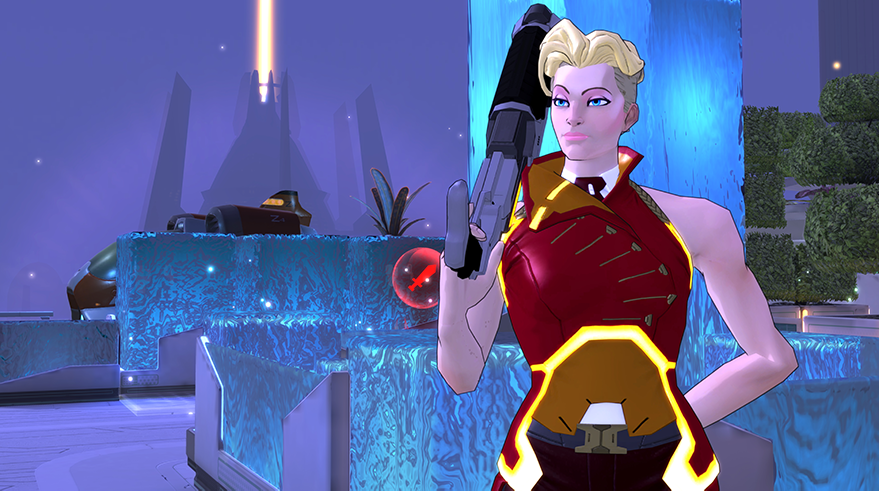 If you’ve followed our coverage of the game to date, you’ll know that the player characters are divided into three different categories: frontline, firepower, and support. The character Elle, who looks like a supermodel with a shotgun, is clearly a firepower character, meant to deal a loads of mid-ranged damage.

Karras told me two major things that set Elle apart from the other ranged firepower characters. The first is immediately noticeable when you fire her basic attack. Each attack for every character has a telegraph, or as Karras called them, a “template.” Unlike those of her counterparts, Elle’s template will change based on the distance from the origin point. Basically, the blast cone narrows the further it is from its origin. This gives her an interesting balance of melee-like AoE and ranged sniper-like shots.

However, Elle is also very susceptible AoE attacks. She does have a dash ability that can be used twice before it drops into a cooldown state, and she can also fire rounds as she dashes, unlike most of her counterparts. But when she dashes, it’s only one square, which means that it might be useful to step out of focused damage or allow her to duck behind cover. AoE attacks will eat her alive regardless.

Her ultimate ability will literally knock you off your feet. She sprays a wide cone that both damages and sends all the enemies within that cone backward several paces. At the same time, she is also knocked back, which turns this ultimate ability into one that needs to be deployed strategically. 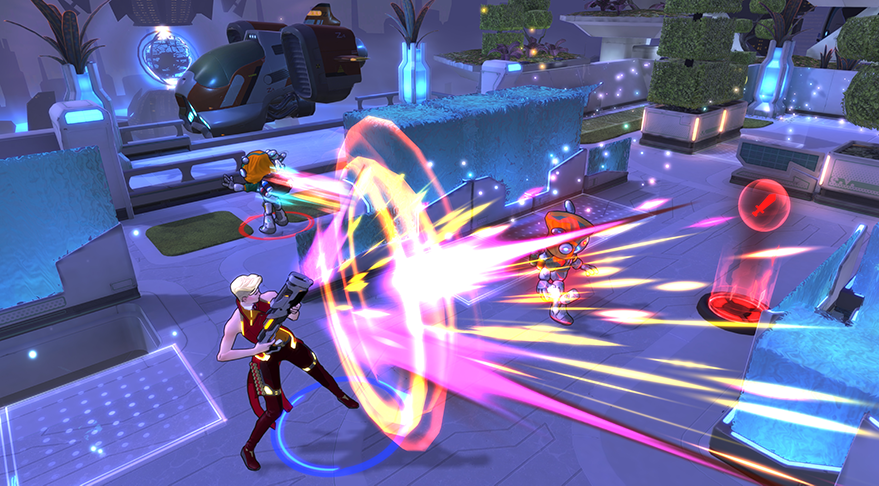 As we all know, communication in a PvP game is paramount, but when all you have is text-based communication, players need to be able to gather as much information as possible from the interface.

The first of these changes is simple. As you might have noticed, friendly players have a blue nameplate and enemies have red. Red = dead, right? Well, after playing the alphas, a few of the testers found that it was still difficult to tell the position of friendly and enemy players by just the nameplates. So the developers added a ring — either blue or red — around the feet of the player characters. This should help you better distinguish your friends from your foes when laying down telegraphs.

In the same vein, it’s good to know what your teammates plan on doing before you make your move. If you don’t have voice chat, then it becomes horribly difficult. However, now the alt key will allow you to see all of your friendly players planned moves. Also, the developers added a feature that will allow you to easily plan a move, then test out alternatives without having to frantically escape out to reset before the timer runs out.

Lastly, you can now see both friendly and enemy abilities and cooldowns when hitting the alt key. My initial thought was that this is going to pretty much take some of the thinking out of the game, but Cook anticipated my question by saying, “We want it to be a high skill game, but we also don’t want you to have to memorize a million things in order to be good at the game.” Karras also jumped in to explain that this wasn’t going to change much because the players already “had the bookkeeping down.” This is just going to put everyone on the same playing field — without spreadsheets. In fact, as Cook put it, it’s more of a strategic change:

“It moves the strategy to a more important part of the turn. Because as you lose resources, strategic decisions become more determined. But when you have your dashes up, people get much better bluffing.”

A brief word about seasons and crafting

Season can be broken down into three parts, from my perspective: chapters, quests (or contracts), and collections.

Chapters are the lore of the game. Unlike some PvP-oriented games where the concepts are mostly built around the characters, Atlas Reactor also has a continuing story about the setting of the game.

Those chapters lead into quests, or as they will likely be called to maintain congruency “Chapter Contracts.” These are a set of things to do in the game that tie into the story of the chapter. They aren’t much different than the previous daily contracts except for the fact that they give different chapter-related rewards.

This leads us into rewards themselves, which are the crux of the seasonal collections. Each season has its own set of collection items. They vary from skins, weapon effects, taunts, to other similar items. Cook challenged me to ask if they would contain power. Of course, I didn’t take the bait because he had mentioned multiple times that none of the rewards would contain anything that would give players an unfair advantage in a match!

The rewards drop from loot matrices, as you might know from previous articles. But coming up in closed beta, you will be able to craft your own matrices using material drops or recycling rewards for materials.

Getting into beta and community rewards

Finally, let’s talk about how you can be a part of the growing Atlas Reactor community. If you have participated in any of the previous alpha events or sneak peeks, congratulations: You’re in. If you have bought one off the pre-order packs, you likely know it wasn’t really a pre-order because you do have instant access to the game. And lastly, Trion will send out invites to people who have signed up via the website as the studio finds it needs new players.

The last thing the developers discussed with me — and I think this is an interesting way to spread the word of Atlas Reactor — is the community reward system. If you’ve been a part of a Kickstarter or Indiegogo campaign, you might have seen backer rewards, rewards giving to the community for meeting certain goals. Atlas Reactor will be doing the same thing, but instead of the goals being all monetary as they are for most campaigns, AR’s community goals will ask the community to do certain things. Trion wouldn’t tell me what any of those “community missions” might be, but the phrase “fan art” might have slipped out as a possibility.

Personally, I’m looking forward to jumping into the Atlas Reactor closed beta today, and I’d like to thank the Trion devs for talking to me about what we all should expect. I’ll see you in the arena. 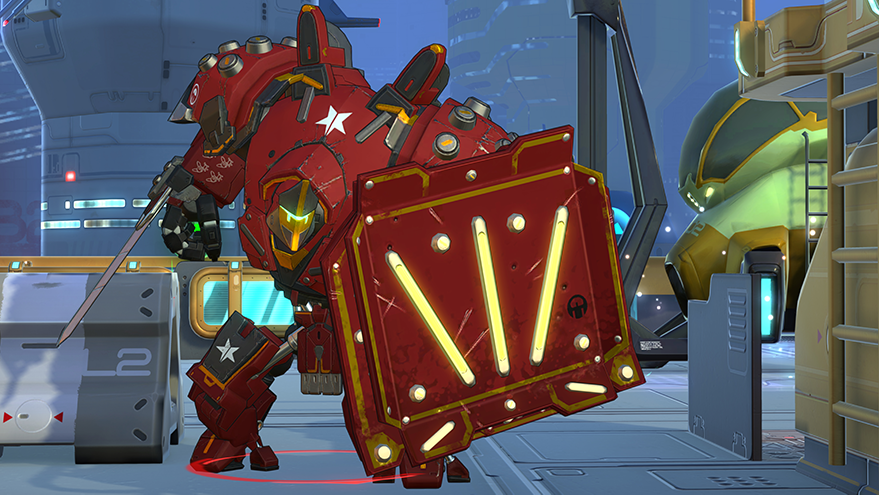 Tizmah1 Yea, I checked out their stream. They stayed at around 1,200 viewers, until Atlas Reactor came on and it slowly dropped to about 200 viewers. Have a feeling this game will be very niche.

I love the gameplay of this game. Unfortunately very few, if any, of the current heroes are appealing to me. Their design is just rather meh, and for each, you have a handful of abilties that are just rather dull, with maybe 1 that actually stands out (not always your ultimate).

Balance (yes its still beta) is pretty awful too, which probably is getting in the way of some heros feeling more likeable. Like Rampart (the robot in the last picture). Ive tried to play him over and over and he is just in a really sad state at the moment. His abilties and mechanics probably looked great on paper, but in actual games, you are left quite bored out of your mind and spend most of your time chasing people (when your grab attack is on cooldown)

Sorenthaz   You don’t need the tokens to mod abilities. Basically, each mod token is worth 500 ISO (the in-game currency). When you go to unlock a new mod, it will ask you if you want to spend ISO if you have no tokens. The tokens can also be gained as one of the rewards during play.
So far I haven’t seen even a hint of what I would call P2W in Atlas Reactor.

Lol… looking at the Founder’s Pack options, it’s kind of sad, really.  Heroes of the Storm had much more generous offerings with their $40 packs compared to the $60 pack that AR is touting.  A lot of it is just fluff.
Makes me wonder how much the heroes will cost if you can only get 3 of them with the $25 pack and none of them with the $10 pack.  Again going back to Heroes of the Storm (as its pricing was considered ridiculous compared to other MOBAs), the Starter Pack in HotS nets you 5 heroes, a skin for Zeratul, and an exclusive mount.
Also the Mod Tokens (“Tokens used to acquire different Freelancer Ability mods”) sounds awfully fishy and potentially borderline P2W if these “ability mods” can heavily impact a hero’s performance.

At this point I’m just waiting to hear about how heavily they’re going to try and monetize every aspect of the game that isn’t the core gameplay.

Hate to be negative, but I feel like this is going to be a giant flop for Trion.