If you get past its (hopefully improving) looks and to the substance of the long-in-development Project Gorgon, you’ll find that this game is a gem in the MMO field. It’s a title that prizes exploration above nearly all else, including mindless combat and linear progression. Going back to an older RPG sensibility where the world was full of more things than just XP pinatas to break, Project Gorgon encourages players to see what’s out there, to find neat things, to uncover new systems, and to challenge what they think an MMO can and should be.

Personally, I’ve loved every minute of it so far, even though the game is still just in alpha. It’s been a public alpha, however, and should remain so until the title’s Steam early access release some time this year. A little while back, the incredibly small development team decided to completely redo the starter experience, trading an ugly-as-sin cave for a freeform island. While the island portion isn’t terribly difficult, it can be a little confusing to those coming from other MMOs and feeling a little lost in Gorgon’s unique take on things.

So I spent several hours this past week combing over every square inch of the island to put together a guide that should not only help you get through the tutorial but should also illuminate you as to the potential that Project Gorgon contains. 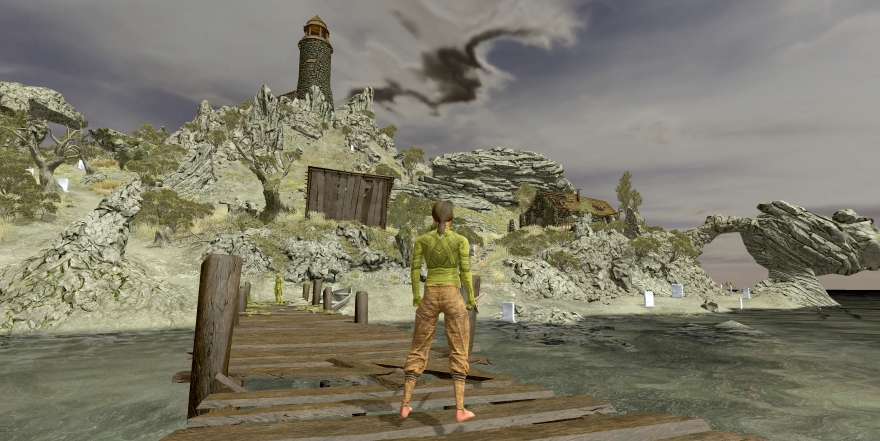 Welcome to Anagoge Island, your home for eternity

After a truly bizarre character creation experience, in which your avatar is killed-slash-mind-wiped, you’re dumped on a relatively square island and left to your own means. This is Anagoge Island, an old testing ground for magical adepts and currently the home to a handful of fellow amnesiacs and a whole lot of hostile wildlife. The water around the island is filled with devil sharks and there’s no clear way off. So the primary goal of your initial journey is clear: find a way to escape the island.

If that’s the main goal, then I would posit that the secondary goals are just as important. Anagoge is full of new skills to learn — something around 15 that I counted — and since your character is developed through these skills, it’s pretty vital that you snap up as many as possible. There are also systems to learn, gear to collect, and a handful of recipes and abilities to be gained that can all give you a head start when you leave the island for the game proper.

One of the very first things that you should do once you get used to the interface is to make a keybind for “select next non-combatant.” This will target hard-to-see items and interactable objects in the world, and it is absolutely indispensable in your adventures. As much as your inventory space allows, pick up everything, as you never know what items may have a use down the road.

If you need a step-by-step list of objectives for the main part of the starter island, here is what I would suggest in a general order:

While the above steps are what I’d consider the most essential path to navigating the tutorial, to really get the most out of Anagoge Island, you’re going to want to pick up and level all of the skills you can find. Skills offer combat and non-combat abilities, special menu features, and all sorts of permanent buffs when you level them up. As much as possible, you should be trying to level skills constantly as you adventure — so don’t worry about taking your time on the island doing so.

Here are the 15 skills that I found during my travels and where to get them:

Don’t read these unless you want to be totally spoiled, but there are a few other pieces of advice that I don’t mind passing on to you.

Hope this helps, and happy adventuring in Project Gorgon!

bardamu1999 Totally, i’ve played Shroud of the Avatar for along time, and Project Gorgon looks better and does alot of the stuff Shroud tries to do, alot better. It’s crazy.

Is inventory management still a huge part of the game?

When I tried the Alpha a while ago (could it have been 2 years?), the devs were insistent that inventory management was going to be a significant part of the game. For a game with scores upon scores of skills, most requiring equipment, resources, etc., you basically had to drop or not pick up 90% of the stuff you found and only work on 1 or 2 skills at a time. That led to a lot more running back and forth than was necessary, making everything take like 5-10 times longer.

Even if I wasn’t a pack rat/ collector/ horder, it was just too much of a pain in the rear spending almost the entire game managing your inventory and banks, and doing way too much running back and forth to the same place over and over because you simply couldn’t carry everything you needed in a single trip.

the game play of this game, the immersion… i dont even worry about the graphics. the gameplay more than makes up for it.

Because of this Massively article, I figured I’d dload Project Gorgon and check it out.

Now, I’m still in the honeymoon period, I know that, and yes, the graphics REALLY need work (esp. the water!)…but man am I having fun on the noobie isle!  I’m about ready to leave it and I thought I’d check this guide again in case I missed something.

Man, this is great! I’ve just spent the last half an hour totally enthralled, and I’d only intended to make a character and hit a couple of mobs! This is really good fun — still obviously quite raw, bu waaaay slick enough not to pose a barrier in and of itself to your enjoyment. Can’t wait to see how this develops.

Lights_andMusic And still a lot of what you see is placeholder. There is a GUI change coming soon too.

Samizdat mmonerd Well i agree but we can’t ( at least me) seriously play a game with windows 98 theme graphics. It wont appeal to new player base.

I’m impressed with what Shroud of the Avatar is doing, but this game seems from this article at least to be doing it even better.  I need to check this out.

Requesting you Project Gorgon players submit photos to Justin for Sunday please! Would like to see some player shots.

I’ve read previous columns on this game, and it sounded intriguing, but this makes it sound great. Very much like a traditional adventure RPG, but with people around to share the adventures.