END_OF_DOCUMENT_TOKEN_TO_BE_REPLACED
The first two chapters of Knights of the Fallen Empire after the break kind of left the Star Wars: The Old Republic fanbase feeling meh. Some people like Kaliyo Djannis. Aric Jorgan wasn’t exactly hated, but he certainly wasn’t the favorite Trooper companion. In the next chapter, we will be reintroduced to Vette, or for those who’ve never played a Sith Warrior, introduced to her for the first time. Among SWTOR players, Vette is almost universally liked. Even people who play female characters (those who can’t romance her) like this blue Twi’lek. I even have to admit a fondness for the little graverobber.

There are many reasons why people could like her and want her back in the game. It could be her quirky attitude, maybe her sense of adventure, or her amazing voice actor, Catherine Taber. It might be all three of those combined, but I think the single largest thing that makes Vette more anticipated than any other companion is nostalgia.

To understand what I mean by this, we have to go back to July 15th, 2003. I was buried in this little video game that nearly every writer on this site likes to talk about: Star Wars Galaxies. As I was trying to figure out which holocron I need to become a Jedi, BioWare was about ready to release the game that would, in my opinion, become the cornerstone for the studio: Knights of the Old Republic. Of course, the studio had already made many great games before then — Baldur’s Gate and Neverwinter Nights to name just a few — but KOTOR really defined the BioWare storytelling model and set the bar for any future Star Wars or BioWare games.

Even as far back as Baldur’s Gate, BioWare set out to make memorable characters. Many players became very attached to a pair of characters you run into in the underworld of Taris: the Wookiee Zaalbar and the spunky Twi’lek Mission Vao. From guiding Revan in underworld of Taris to the ultimate defeat of Malak in the Starforge, Vao stuck by the conflicted Jedi, always adding a bit of lighthearted humor to an otherwise somber story of a Dark Lord returning to his or her Jedi roots.

When SWTOR was its infancy, BioWare started releasing videos that would talk about a certain companions. There was one on Kaliyo, Bowdaar, and a few others. Of course, Vette was chief among them. In that video BioWare revealed that Vette was modeled after the other famous Old Republic Twi’lek: Mission Vao. The studio even brought back the same voice actress to play the role. Many KOTOR fans were disappointed that Mission was a teenager, which meant there wouldn’t be a romance option for the character. However, Vette was the studio’s way of making up for that. She is a very similar character who is old enough that it’s not creepy for your character to have a romantic relationship with her. 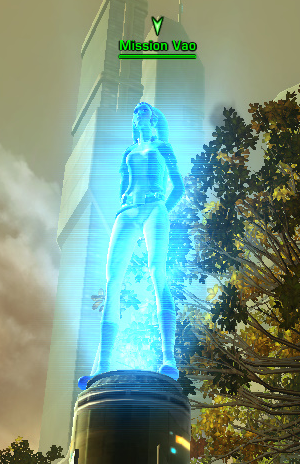 The similarities between Mission and Vette are endless. I mentioned the voice actor. They are also both Rutian Twi’leks. They both have a spunky attitude and are prone to making wisecracks at the worst times. But the similarities go beyond just the physical. The interesting thing is how shockingly similar their backstories are. Mission Vao and Vette grew up on a planet whose city expanded the whole globe. Vette’s planet (technically moon) was, of course, Nar Shaddaa. There, she ran with a few different gangs and nefarious individuals (we will get to one in a minute). Mission’s ecumenpolis was of course Taris, where she was also a street urchin.

Mission was best friends with a Wookiee named Zaalbar. They were very close, like brother and sister. On his home planet of Kashyyyk, we learn that Zaalbar was like Wookiee royalty, being the son of a Chieftan. Vette also has a well-to-do best friend: In the Smuggler story, we learn that Risha is actual the daughter of Nok Drayen, who as it so happens is in line to rule the planet Dubrillion. He was also a chief member of the super-secret Star Cabal. Although she’s never mentioned by name, we know that it was Vette who was Risha’s best friend growing up because the stories that each of those companions tells crosses and reinforces the other.

Each of these blue Twi’leks had one sibling apiece, who for one reason or another left her, leaving the young woman to fend for herself. Mission’s brother Griff left her on Taris. And at an early age, Vette’s sister Tivva was sold to many different scoundrels, ultimately ending up as an entertainer on Nar Shaddaa. Both of these missions cannot be discovered unless you gain affection with the companion. And funny enough, both of these missions end up on Tatooine. Of course, Vette’s mission ends with a search for her mother, and Tatooine is where you ultimately find Mission’s brother Griff.

Then, in the ultimate piece of similar history, both end up as part of an infamous crew of heroes lead by a Sith Lord. Mission stays aboard the Ebon Hawk, travelling the galaxy with the flip-flopping Jedi-turned-Sith-turned-Jedi Revan. Vette, of course, ends up with Vitiate’s ultimate enforcer, the Emperor’s Wrath, who — funny enough — might be a good guy after all, too.

I’m curious about this next chapter. BioWare and fans alike are generating a lot of hype around the return of Vette. According to the trailers, we’ll see a huge heist led by Gault and Vette. Of course, it’s supposed to help the Odessen Alliance, but knowing Gault, I’m sure there is some sort of hidden agenda. Wouldn’t it be interesting if Vette’s story ended up having a choice very similar to the one Revan had to make regarding Mission? Some very tough decisions had to be made on Lehon if the player of Revan chose the dark-side options.

Quick correction for you.

The companion missions no longer rely on companion affection, so you would get Vettes story and Rishas as you progress through the class story even if your affection stays at rank 1 with them

Why does Kira Carsen never get any love… so fun!  Plus… Laura Bailey aka the Saints Row Boss aka POTUS!

Vette grew on me, but I had to get over Bioware’s hyping of the character before I could give her the chance.

JimGriffiths Shaddoe plynky12 Deuter TheDonDude Yeah, thats not an option. That a “This is what you are going to do. Deal with it”.

Nah. I’m waiting for Mako. She’d better get a fabulous re-entry into the story.

My Main Juggernaught is only in KotFE now because I know him and Vette can be reunited. He’s always been amused by her snark, as have I. Their sense of humour gel well together. I really need to get my Trooper caught up with Jorgan as well, heh.

Very nice. Vette is my favorite. I may actually resub once this goes live.

ApathyCurve I agree.  I’d rather get dark Jaesa back then Vette.  Dark Jaesa was my SW’s evil queen and I always liked her.

Deadborder This basically sums up my feelings towards Vette to a tee.

Project Gorgon brings out its Attack of the World Bosses event...

The Feast of Swords returns to Final Fantasy XI