If any of you played the Dark Brotherhood quest in Skyrim, you likely thought very little of the Black Sacrament being performed by the kid at the beginning of the questline, but you did it anyway because assassinations, yo. It did ultimately turn into a creepy questline with the Night Mother eventually whispering to you. Compare that to the way the teaser trailer ended for Elder Scrolls Online: The woman at the end of the trailer whispering gave me chills. That was the way the Black Sacrament should sound.

As you probably know, my primary focus has always been the story being told in ESO. And looking at the teaser trailer, we learn very little about the DB or how it’s going to play out in the game.

Then I got to thinking that it’s been almost five years since the release of Skyrim and ten years since the release of Oblivion; there might actually be people out there who don’t know anything about the Dark Brotherhood, what it’s about, and why that whisper at the end of the teaser trailer would give someone the chills in the first place. Maybe I should take a moment to explain what the Dark Brotherhood is, where it started, and how it might play out in ESO.

I find it extremely difficult to classify the Dark Brotherhood as an assassin’s guild. To me, the term guild signifies an organization whose primary motivation is profit. Although there is an element of murder-for-higher. We also know there is a darker, religious side of the Dark Brotherhood — a supernatural side that extends beyond the Divines and the Daedra. Personally, I consider the Dark Brotherhood a cult, and I believe that many other Elder Scrolls enthusiasts would agree with me.

Before we dive deeper into the history of the Dark Brotherhood, we should talk about how the assassinations work according to the lore of the game.

First, we need an effigy of the person you’d like to have killed. Of course, the effigy doesn’t have to look like the person you want dead, but it does have to be made of a skull, bones, flesh, and of course, a heart. Then get a dagger — there doesn’t seem to be a size requirement since the one Aventus used was quite small — and rub the petals of Nightshade on the blade. Now, surround the effigy with lit candles. The instructions are a bit ambiguous regarding what “surround” actually means. It could mean a crescent like Aventus or around the whole body like Astrid. Then simply stab effigy with the dagger repeatedly while whispering,

“Sweet Mother, sweet Mother,
send your child unto me,
for the sins of the unworthy
must be baptized in blood and fear.”

At this point, the Night Mother (more on her later) will get the message and give instructions to her Listener. The Listener will then give the instructions to a Speaker, and the Speaker will assign the target to a Silencer. I think you can guess what the Silencer does. Just like the hand used in the symbol for the Dark Brotherhood, the organization operates with five “fingers” too: the Listener and four Speakers. Each speaker is assigned a special Silencer, but there are many other Silencers, which I assume will be your role in ESO.

There is a fourth role, but I’m not sure that it will be seen in ESO. That is the Keeper, who keeps watch over the body of the Night Mother. In Oblivion, the Night Mother was secured in a crypt in Bravil. However, in Skyrim, she was being carted around by a jester named Cicero. It’s uncertain where she is in ESO, but I believe that she is actually in Bravil still because that city is in the game behind a wall that you’re not supposed to get over. (Of course, some people have.) 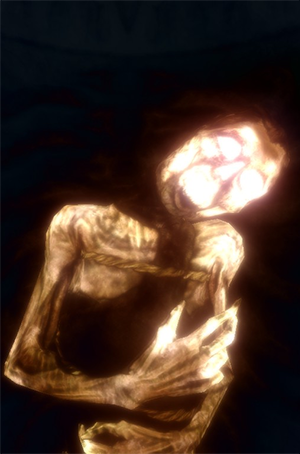 The Night Mother, bride of Sithis

But first, we should talk about the Night Mother. Supposedly, the Night Mother was a Dunmer (Dark Elf) woman who lived during the first couple of centuries of Second Era. She became the lover and partner of Sithis, a deity who predates other Tamriel deities.

The Night Mother was a woman in the Cyrodiil city of Bravil. She was the mother of five children, who might have been the spawn of Sithis. To show her devotion to Sithis, the woman killed her five children, sending them to the Void. Of course, the people of Bravil thought this was deplorable and burned the woman and her house to the ground.

About thirty years later, a man began to hear whispers in his head from a voice who identified herself as the Night Mother. She whispered him, giving him the will of Sithis. Thus began the Dark Brotherhood’s mission to fill the Void with souls for Sithis — and profit.

We know from the teaser page that we will return to Kvatch and Anvil in this DLC; both are cities we’ve not seen since Oblivion. However, these cities are several centuries newer than when we saw them in Oblivion. In fact, we get a glance at Anvil in the teaser video for Dark Brotherhood, but that is not the most interesting part. We also get a glimpse of an idol that I am going to assume is a depiction of Sithus or perhaps Mephala. (I’m leaning toward the latter because of the arms.) And we also see a book with a handprint on the cover. This is most likely a copy of “A Kiss, Sweet Mother,” the instructions on how to conduct the Black Sacrament. What would be more fun is if were a new book that talks about the formation of the Dark Brotherhood, something that was hinted about in book called Brothers of Darkness (in ESO, it has the tag 1st ed. on the end of it). Also notice the statue in that frame, which appears to be a cloaked women with five skulls at her feet: The Night Mother.

That book leads me to my biggest piece of speculation: I believe that the questline will ultimately lead to a confrontation with Morrowind’s Morag Tong, the cult of Mephala, from which the Dark Brotherhood first emerged. The Tong were the ones who killed the Night Mother, and if I might speculate some more, I believe that our characters will become a Listener… or at very least, someone who hears the Night Mother.

There is so much more that I could write, but I’d like to hear your thoughts. What do you think the questline for the Dark Brotherhood will be about? We know there are daily contracts; would you like to pick those up off a bulletin board or from the Night Mother herself? Let me know your thoughts in the comments below, and I will talk to you next time!

Oh, and I would prefer the Night Mother as long as she doesn’t repeat the same contract line over and over.

I enjoyed the setup with Astrid in Skyrim where she takes you to a house in a remote area to make a choice to kill one of three people who had sacks on their heads and hands tied. Astrid’s assassin-like tone in her voice during the event was exciting. I hope to experience something interesting like that.
After that, I think you will end up getting political contracts in time. Although, I didn’t enjoy the repetitious contracting towards the end. It became too common and lost interest.

Do we get the choice of killing them ? Always liked that you could do that in Skyrim.

I found another one today

that’s your older sister A ?

in my second I told less truth but it was I

who in 1994 said FUCK THIS INTERNET SHIT to myself

I did sit in there once waiting

I walked back arrived and pulled the plug

or tom Clancy as far as I know

best ficking maching in the world me old da said

how to fool the cows

and build motorways and get grant phil despot

tell them we need saved

just because a tramp when I sent me da an email

did I forget about jen

you listened to me saying to my mom

that there global warming mug you bought me ?

and I never washed it

I EAT PLASTIC I DIE I COLLECT WASTE

PENGUINS AND POLAR BEARS HAVE USES and

AGx All of them. Like in singleplayer games. Its like NPC factions in other MMOS only better designed.
The last game with guild restrictions was Morrowind. But i suppese when we will have great elven houses factions and guilds they will be exclusive because this makes much sense if you want to be something more that nameless blade for hire.