If you’ve been waiting for a really good deal to check out The Secret World, it doesn’t get much better than this! Now you can dip your feet into the Filth for free; Funcom has implemented a free 10-day trial. That’s 10 days of secret societies to explore, conspiracies to unravel, mysteries to solve, and spooky ambiance to soak up.

If you already have the game, you might be interested in the other news Game Director Romain Amiel announced during today’s Streaming Ones dev livestream — Issue #15 is coming in “a couple of weeks.” Yes, that was fast! All three Sidestories are being bundled together into an issue, and a whole new investigation mission is being tossed in to create The Sleuth’s Gallery. Amiel explained previously that the format of Sidestories didn’t go over as well with players as hoped, and many skipped them thinking that they weren’t a part of the story. Since the team is no longer making Sidestories, bundling them in a more recognizable format makes sense.

The best part is that any players who purchased any or all of the Sidestories previously — Further Analysis, Love & Loathing, and/or The Last Pagan — will receive Issue #15 for free when it releases. And like all other issues, any of those folks who want the special outfit that comes with the collectors edition just needs to just pay the difference between the two versions. We let you know when there’s more info, but for now you can enjoy the new cover art below. 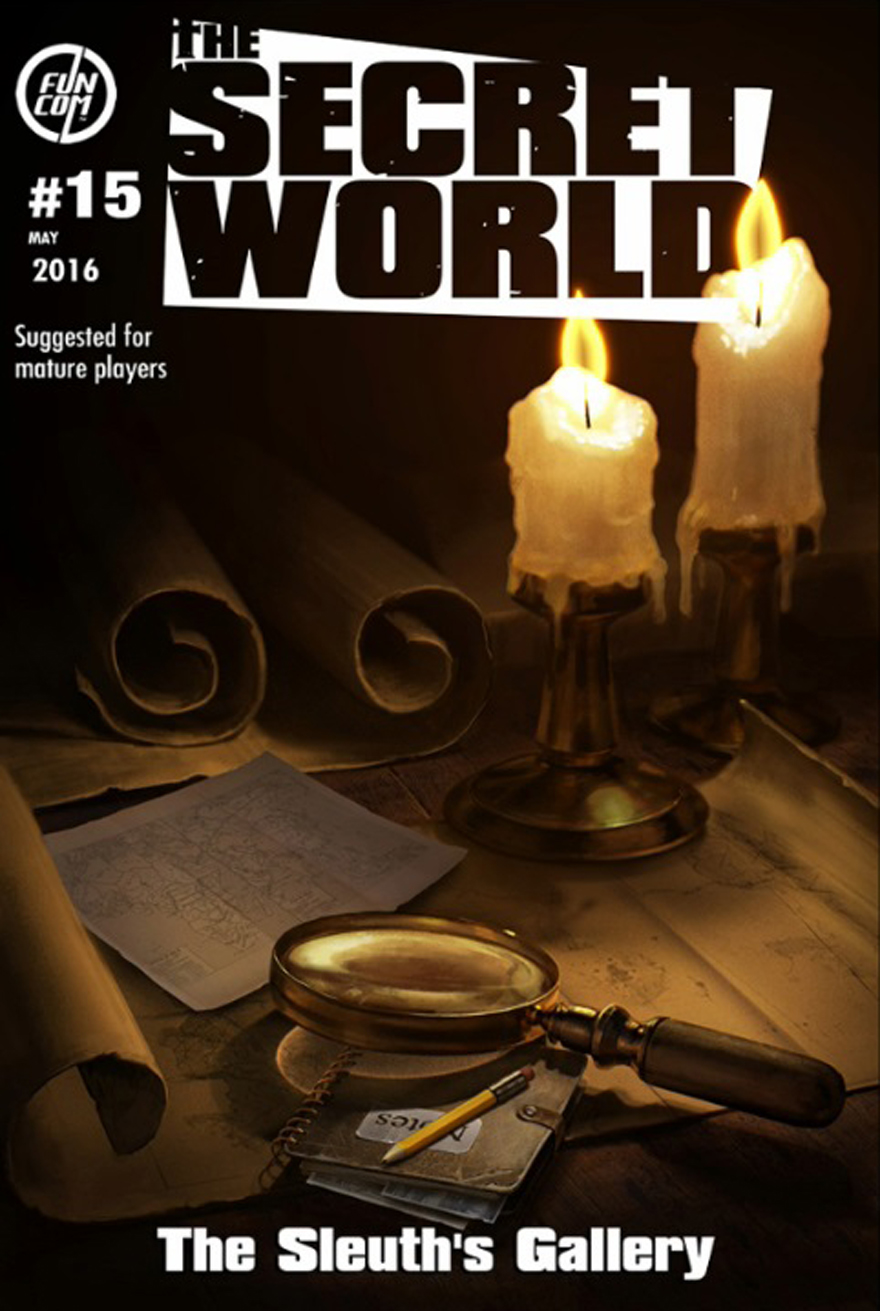 Source: The Streaming Ones Episode 22
Advertisement

Armsbend Sorenthaz hugmonster BritoBruno TSW and ESO both have more mature playerbases. It’s definitely nice and the fact that they’re both great games with some of the best payment models out there is probably not a coincidence.

Sorenthaz BrotherMaynard hugmonster BritoBruno
It may genuinely help to approach The Secret World’s content more as a story (i.e. you are the star of this movie) than in the traditional “How can I optimize my returns? standard gaming default. TSW is far, far less about “rackin’ the levels and gettin’ the phat lootz” than other games. :-)
If you play, you should have more than enough skill and ability points to be what you want or need to be as you go along. The game is not stingy with gear or currency either, although you may want to use the player market (central access –> the bank in London, although there are other banks in-game now) to get that specific piece of gear you’d prefer more easily..

You can preview missions without accepting them — look at anything which catches your interest and (seriously) just pick the ones which immediately intrigue you.

It’s not like other games, where if you don’t do missions 1 through 5 in order, you’re instantly sub-optimal and “fucked” (<– a technical term :-) )

As Armsbend mentioned. if a mission has following content, the game will let you know — and often point you there — and missions you pass over will still be there waiting, if you decide to come back later for them, at any point.

Probably, the one thing you might find helpful is to know that the different mission icons denote specific types of missions.

The bright blue icon is the Main Plotline, which spans most of the game — so you’re not expected to do it all in one go (there’s no advantage to rushing it); just pick up pieces of it as you move through the game.

The brown icon denotes a standard action mission. Usually more than just combat, but there’s combat in there somewhere.

The green laptop icon denotes an investigation mission — with the focus on solving mysteries or riddles. These can be really, really esoteric (be warned), and will likely have you scouring the web searching down clues (or walkthrough websites for solutions! ha!)
The green crate icon denotes a side mission. These are typically short-shot missions of various types, which don’t have deep connections to your ongoing adventures.

Basically, Sorenthaz, just follow your interests, and you’ll be good. It’s a story more than most games; follow the fun. :-)

BrotherMaynard Sorenthaz hugmonster BritoBruno I just remember the first area having a bunch of missions bundled up.  And it was hard to filter out which missions weren’t worth picking up.

Sorenthaz hugmonster BritoBruno
As others have said, it’s gotten a lot more streamlined without feeling dumbed down or “on rails” — it’s simply less “messy” in some respects.
For example, repeatable quests you’ve already done are now marked (at the quest acquisition site) with a checkmark symbol on the quest icon — so you can tell at a glance that you’ve already done that one, even if you don’t recognize the name.
There are several metric tonnes of quests in The Secret World by now, so this sort of thing can really help.
Cheers

BalsBigBrother MJ Guthrie I file that under ‘Would have been kinda nice’. Otherwise I’m in full support of this Issue #15 concept.

“The best part is that any players who purchased any or all of the Sidestories previously — Further Analysis, Love & Loathing, and/or The Last Pagan — will receive Issue #15 for free when it releases.” Oh Funcom <3.

Armsbend MJ Guthrie BalsBigBrother your account page will have them on