END_OF_DOCUMENT_TOKEN_TO_BE_REPLACED
I have long been a proponent of roleplaying in MMOs. I’ve often been the roleplayer’s spokesperson on different podcasts and new media broadcasts. I’ve always been steeped in a game’s lore, and I always attempt to learn as much as I can about a game’s in-game history and what lead to the events that happened up to that point. Most games have lore; I can’t think of an MMORPG that doesn’t. So why is it that lore is so often overlooked by much of the MMO community? I honestly don’t understand it.

A fellow Star Wars: The Old Republic personality and YouTuber SWTORista published a video on the basics of roleplay yesterday in her SWTOR Academy series of videos. As she does in all of the Academy videos, she outlines the basics of that aspect of the game. She explains how to makes a character, the differences between the types of venues, and how to go about roleplaying in the game itself. It’s a great video, but this critical question is beyond its scope: Why should you roleplay in the first place? I think I can answer it. Here’s why I think roleplay is important — for both the players and the developers.

I should state first that I don’t believe that roleplay is for everyone. When Star Wars Galaxies first started, I had a close friend who was a great gamer and even a wonderful social gamer. But when it came to immersing himself in a character and doing things that his character would do, he just couldn’t wrap his head around it. He tried, bless his heart. We even went so far as to try to get him to play a character that was a little odd to play off his particular idiosyncrasies. That didn’t work; he ended up licking the walls. At least his character did!

Despite issues with the rare person who just can’t wrap his head around it, there are many people who find a new level of fun, immersive storytelling when roleplaying a character in MMOs. I personally believe that the Star Wars Universe is one of the best to try it first because of plethora of lore to pull from. Even though in the end it wasn’t for him, my friend told me that when he first started to roleplay in SWG, he said that it felt like it was the reason that he started playing MMORPGs in the first place.

I don’t believe that you have to start jumping into roleplay at the cantina on the fleet pretending to be a Sith Lord looking to pick up a local Twi’lek dancer; your first step could be as simple as to write out a character backstory. How did your character come to be where he is now? Where was she born? Why did he end up in the Sith Academy in the first place? One of the great things about the SWTOR storylines is the amount of lore that you learn organically. And as the original lead writer for the game, Daniel Erickson, said before the game launched, the SWTOR story is set up so that the how and why of your arrival on Korriban is completely up to you. (I’m sure he said “absolutely” in there somewhere, too.) Maybe that’s a good place to start. 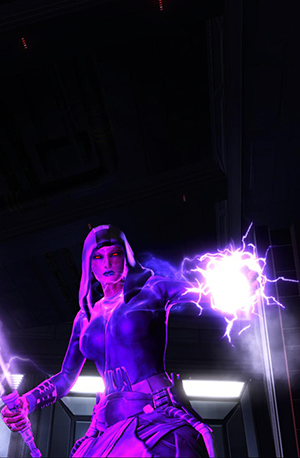 There is a new scientific study put out all the time; we hear on the news one day that chocolate will cure cancer, then two days later we hear that chocolate will cause cancer. Of course, that’s usually media outlets misreading the results of the study in the first place, so when Forbes says that creativity increases productivity, take it with a grain of salt. But I think the underlying truth is that creativity is good for the human psyche.

There are very few things especially in modern video games that sparks creativity like roleplay. Again, I’m not saying that you have to do anything super crazy; a character backstory, a foundation, is still creativity. There is something satisfying that you have created something that works.

I enjoy the Batman: Arkham series; I like BioShock. Both of those games have wonderful stories, and I will play them again and again. But there is nothing like making your own story, then sharing that story with other people around you. If you find a good group of roleplayers, they will help you create a story that is not just fun for you but also something that benefits other roleplayers as well. And that’s another side benefit of creativity: Creativity breeds more creativity.

This one’s mostly for the developers. Maybe it will encourage them to focus some time on the quality of life for roleplayers. Roleplayers are in a game for the long haul. In the midst of players demanding new raids, new PvP warzones, and more story, there is a quiet voice saying, “I’d be happy with chat bubbles.” That voice will be there for long time, and the reason that roleplayers will be in a given MMO for a long time is simple: They make their own content.

Most roleplayers will play through any new content. Many roleplayers that I know are avid PvPers as well, but ultimately, roleplayers will make their own content. I’ve done posts in the past about events that I spearheaded, and I’m far from the only one who does that kind of thing. Every roleplayer in his or her own way creates content. Some will go so far as creating events for large groups of people, but even the person who is roleplaying a bartender is important for creating an environment of immersion. All of them will stick with a game for a very long time — if the developers don’t neglect them.

As I mentioned, roleplaying has many benefits for the gamer and for the game itself. If you’re looking for a good how-to on roleplaying in SWTOR, then hit up SWTORista’s video, and if you’re looking for a great, welcoming server, then I would recommend Ebon Hawk, personally, but that’s only because I’ve not had that much experience on the other two large RP servers: Begeren Colony and The Progenitor. If you ever have any questions about roleplay, you can always hit me up on Twitter, I make my best effort to address anyone who asks a question there or in the comments below.

mourasaint  And yet completely correct.

mourasaint  Or, you know, sub and never get nickle and dimed at all.

Well, that is one kind of RP Deadborder . Whatever gets you through the night.

How to RP in SWTOR: close your eyes and pretend really hard you’re not being nickle-and-dimed every two seconds.

Smiggins what does that even mean?

I think that the author left out a veryrelevant topic that feels to me to be relevant
to this article:

Entitlement:
Many RP’ers believe them to feel entitled to a great many
things when it comes to RP.For example,
the author felt himself entitled to use a picture he took in-game with a guild
that he was an officer in, and another guild for his own personal gains.
Now, a respectful author would consider citing the guild and
characters he used for his article or an even more respectful author would ask
the guild leader or at the very least…mention to the guild leader that he
wanted/was going to use a picture of an RP between a guild that he was a member
of and another guild.
However, this author deemed himself entitled to take and use
other people’s characters for his own purposes.
I will take the liberty of citing the guild members of my
guild that this author didn’t respect enough, starting from the left:
Wearing the sunglasses, Guild: Galactic Fifth Column, Character
Name: Trafalgar
Wearing the blue armor, Guild: Galactic Fifth Column,
Character Name: Ajax Kilvaari  **My character**

Brandishing the killer brown beard, Guild Galactic Fifth
Column, Character Name: Kreighton
Arms crossed behind his head in the red skin, Guild Galactic
Fifth Column, Character Name: Xirix
http://www.gfcguild.com
In the end, RP is all about respect.  Show respect to the people and characters you desire and are RPing with and chances are…they will return that respect towards you.

FacelessSavior I’m assuming you’re speaking in hyperbole because I don’t omit the things that happen in the storyline of SWTOR. I just say they were done by someone else. For instance, as a Sith Warrior, you become the Emperor’s Wrath. Of course, -my- Sith Warrior isn’t an Emperor’s Wrath, but there -is- an Emperor’s Wrath and he/she did those things you did.
That said, there is a clear separation between the RP world and the game’s story. But there is always going to be that. You mention dueling. I like game mechanics and some games do them very well, but the vast majority of MMOs’ mechanics are not reflective of what a character should be able to do in game. So there has to yet other separation. It all really boils doing to what is most important to you.
(PS I dislike it when people force a narrative down my throat, too. Most of the time they are bad to begin with then it’s forced on you ar the same time. Horribad.)

I try to do the same. I’d also throw in the folks who have a pre-scripted story Already in mind they won’t break from. That ignore functions like dueling, to instead emote combat so they can control the winner. The Tavern RP’ers don’t bother me as much as those guys. At least in the tavern they’re creating with each other, off the cuff. Not force feeding a script down people’s throats, and ignoring/berating anyone who doesn’t conform to their script.