If ever there was a game that gives me decisional paralysis, it’s EverQuest II. While it may technically be very much a themepark, there is no denying that EQII has plenty of things to do; so many things, in fact, that my mind spins trying to narrow down my choices whenever I log in. With so many variations of classes and races, and the opportunity to have a large number of alts, some days I just stare at my character select screen, unable to even get past that!

As much as having so much to do in EverQuest II is a strength, I have heard new and even returning players express exasperation and give up at the sheer volume of it all. Trust me, I understand. Beyond the standard fare people think of when envisioning an MMO — questing, raiding, crafting — there’s a plethora of other activities. There’s content (after all these years of expansions and updates, boy is there content!) as well as systems for players to create more content. Housing, collections, and festivals galore can eat up astronomical amounts of time as well. Many times these various activities are intertwined, and doing one will benefit another. I’ve gone on raids just to get a housing item, and crafted my gear to help my adventuring.

The trick may be to pick one aspect and focus on that even before you log in. So here’s the first half (yes, there is that much!) summary of some of the things that are available. We’ll focus today on that standard MMO fare.

I swear, under the entry “truth in advertising” in the encyclopedia there is simply a link to EverQuest II. Like the original, EQII has more quests than you can conceivably do in anything considered a reasonable amount of time. I’ve played the game for pretty much its entire 12-year lifespan — sometimes heavily, sometimes lightly — and I have yet to complete every quest. And that’s not even counting the new content I haven’t leveled into yet! I can confidently say there are sure to be more quests tucked around that I have never seen let alone done; in fact, I found one just the other day. So if you have a goal to complete every quest in EQII, it’s going to take you a long while (and not a few alts since there are class and race specific ones as well!). Even if you narrow it down and try to follow only one leveling path, there are so many quests in those zones alone that you will out-level the content before you finish up the zone.

Besides quests in general, there are specific sub-sets of quests that can be their own time-consuming goal. For EverQuest Two-sdays, a group of #OPTV viewers and I have been tackling the Heritage Quests in order; after all these months, we are just now in the level 40 ranged quests! There are the signature quest lines, both for adventuring and crafting. There are tons of Legend & Lore quests for all the various fauna, and volumes of book quests, which grant you a tome after you work through 10 pages of kill this or that. Each one of these would be a feat. 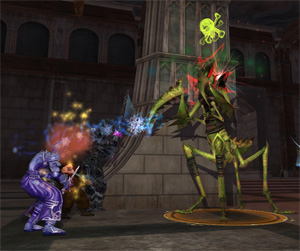 With 300+ dungeons, raids, and instances, you could take up a huge portion of gaming time just trying to run them all. Making this a priority would certainly require a sizeable chunk of gaming time. Each zone and each level range has a variety of options; there’s way too much to say here, so I’ll just point you to our dungeon guide for a full listing.

Another form of dungeon diving is the player-made dungeons. The dungeon maker is a feature players can get lost in as either a creator or a runner. Like housing (see below), there is an easy way to experience all of these dungeons: Select Dungeon Maker from the main menu and click whatever creation strikes your fancy to be transported instantly in. AS a bonus, you earn marks that can be spent in the marketplace for a variety of cool and useful things. (Need a portable repair kit for your gear? The best one is just 75 dungeon marks.)

Speaking of housing items, probably the most useful crafter I have ever made was a carpenter, who supplies me with many a decoration. I might have said my original armorer, but sadly the crafting revamp negated some of the usefulness and prestige of that profession. Regardless, crafting is still a very viable way to spend your time in game, even if yo are only supplying your personal needs. And if you really like crafting and want to do it all, you’ll have to make a small army of crafters — there are nine different professions to make everything from armor and weapons to potions, food, jewelry, skills, and (of course) furniture. On top of that, there are three types of secondary crafting skills: Tinkering, Adorning, and Transmuting. You can even prestige your crafting and try things like experimentation.

Thankfully, the crafting system is completely separate from the adventuring, so players can have adventurers that also craft without sacrificing one over the other.

My home is my castle… or jungle… or train depo…

While not technically standard MMO fare, housing really should be. What can I say about housing in EQII? It’s more like, what can I not say. Aside from the still-seriously-missed Star Wars Galaxies, I still find EQII’s housing system to be the best. It is intensely robust, both in decorations, housing types, and freedom to be creative. There are so many possibilities of what can be made, from castles to jungles to carousels to mighty ships… the list goes on and on. I’d fill this entire column just with a bullet-point list of all the various creative builds I’ve seen; some you’d never even know were an actual house.I personally have a minimum of 10 housing projects that are in various states of completion. And I am just am amateur! There are folks who do nothing but make amazing abodes, either for themselves or for others.

Speaking of awesome homes, besides losing years of your life to decorating, you can also spend an inordinate amount of time just touring the various creations of others. Thanks to the housing and leaderboards feature, each visit is just a click away; you can port between houses in an endless tour. It is astonishing to see how people use various items to create something completely unexpected. And lets not even get into how many decorating items there are available! Just acquiring those is a time sink I have lost many months to.

What? This list doesn’t seem so bad you say? Well you have only seen the half of it! Tune in next week for the conclusion, which dips into many other features that grace the game.

Last Oasis replaces its lobby system with an increased emphasis on...

The MOP Up: Craftopia gets a rush from its bosses

Electronic Arts is reportedly seeking to sell itself off – and...