Last month we brought you several war reports from the massive EVE Online conflict that’s come to be known as World War Bee. After years of being the game’s largest and most dominant military power, EVE coalition The Imperium found itself outnumbered and under attack by a loose band of alliances named the Moneybadger Coalition. The war began to attract media interest at the end of March when it became clear that it was likely the largest PvP conflict in gaming history and that the war was being bankrolled by a super-wealthy player with a grudge.

The first few weeks of the war were a whirlwind of activity, with fleets of thousands of players clashing in the M-OEE8 and UQ9-3C systems and players returning to EVE in their thousands to take part. Things slowly began to die down as The Imperium abandoned its nullsec territories, retreated to the low-security system of Saranen, and began deliberately avoiding fights in an effort to starve the enemy of entertainment. Things didn’t exactly go to plan, however, as the now-shattered Imperium lost thousands of pilots and more recently all of its nullsec territory. The war has now transmuted into a game of pure strategic warfare as both sides attempt to deal as much ISK damage to each other as possible with the lowest cost.

Read on for a short update on World War Bee, which alliances are losing or gaining the most members, and how the release of citadels has affected the war. 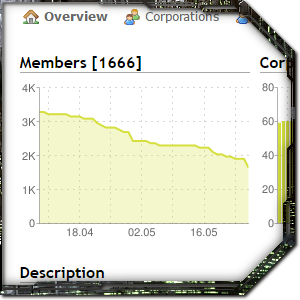 A war of attrition

In our last report on the state of World War Bee, we saw that The Imperium’s decision to deliberately hold back its war assets and abandon its territory may have backfired. Having lost their nullsec homes, alliances Fidelas Constans and Spacemonkey’s Alliance simply opted to leave the coalition. The Imperium’s plans to absorb some of the departing players and consolidate them into the Goonswarm Federation alliance also didn’t pan out, and the alliance has actually lost over 1,200 members in the last month. In contast, opposing alliance Pandemic Horde has grown by over 1,500 pilots in the same timeframe.

Things got a little more interesting when ex-Goon leader and former CCP employee Darius Johnson came back to EVE and launched his own splinter group. He managed to get the original historic GoonSwarm alliance name back via a support ticket to lend some additional legitimacy to the organisation. The original alliance’s name was trapped in limbo after CEO Karttoon kicked all of the corporations in it back in 2010 and then later got himself banned. There was speculation at the time that these events could lead to an all-out Goon civil war, but so far only 166 players have joined the group. 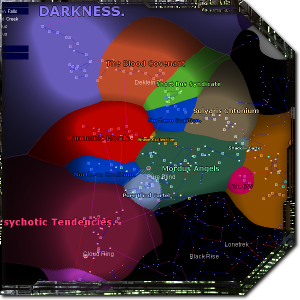 Down but not necessarily out

The news broke recently that all Imperium alliances have now been wiped off the sovereignty map. While this may not necessarily provide a huge strategic benefit to the MBC as The Imperium is based in the uncapturable lowsec system of Saranen, it’s been a significant morale booster for MBC forces. The recent release of the Citadel expansion has similarly emboldened both coalitions, with battles erupting over the deployment of Imperium Astrahus citadels throughout Fade and Pure Blind. MBC member Pandemic Legion even set up its own huge Fortizar citadel right next the Imperium staging station in Saranen as a kind of act of defiance and a handy staging area.

This could mark the effective end of the war for participants whose goals were to evict The Imperium from nullsec, though the fighting will no doubt continue. While the war may slow down in the near future, The Imperium definitely hasn’t given up the fight and both coalitions have scored significant recent victories. Melos Exelion over at Crossing Zebras has penned an excellent two-part account of the recent fighting in Fade from his perspective as a Pandemic Horde newbie, noting the very real danger of Imperium bomber fleets. He’s also written a fantastic piece on the strategies being employed in the ongoing fighting in Saranen and beyond, and Tallardar’s EVE War Journal below has a great breakdown of what’s going on.

Sources: Reddit, Crossing Zebras, TMC, EVE News 24 (Thanks to Scott for the tip)