Feel like flying? How about flying while you fight? In Riders of Icarus, you’ll be able to do both. One of the main tenants of this upcoming MMORPG is building up and training your personal critter collection as you adventure throughout the lands — and the skies.

As you might expect from any self-respecting fantasy game, there are dragons involved. And yes, you get to (try to) tame some of these beasts to be mounts to take you into battle, fight beside you, or even grant buffs. Mounts can also be transformed into smaller-version pets to fight at your side. If dragons are not quite your style, not to worry; there are hundreds of other creatures to choose from, both common and mythical. To get a small taste of this experience before the June 2nd launch of closed beta (open beta on July 6th), I jumped into the game with Nexon’s Patrick Dillon. Then jumped on a bear. Then jumped on a dragon.

Here’s how all that turned out!

Mounts are for much more than just transportation in Riders of Icarus. Mounts can have active skills, passive skills, and/or buffs to benefit you in battle. They also can level up all the way to your character level, improving just as you do. The very first thing we did when we hopped into game for this hands-on was head straight for some bears to tame. Taming involves sneaking up on the creatures (so it doesn’t try to eat your face off) and literally jumping on its back. At this point, there is a little mini-game of key-pressing that will help you successfully tame your target.

One thing that impressed me is that the creature to be tamed does not actually have to be out of combat! Right as I was to begin my efforts, the camp guards came to be “helpful” and began whacking on my bear! Needless to say, I was at first worried I automatically lost the tame. When to my surprise I didn’t, my worry changed to if I could tame faster than the guards were killing him! After a few tense moments, I emerged the victor. This whole taming thing sounds like a piece of cake, no? Let’s just say not everything is a easy as a bear. 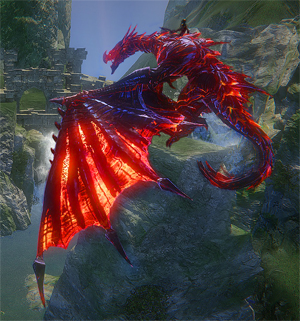 After taming bears, the group moved on to try an elite creature. There are three levels with ascending power: hero, elite, and legendary. Instead of the just-hop-on-and-break-it style of the Old West I used on the bear, the next mob had to be tackled from high above. To try and hop on and tame this mount, you had to literally jump down on it from a cliff — and hope you didn’t miss! Timing became much more important in this case. Other times, taming can require an item that must be acquired first. Each tame requires a certain number of taming points, some take upwards of 40. These taming points will reset when you level, allowing you to tame more and more as your adventures continue.

After this little escapade, we moved on to taming aerial mounts. Oh yes, I get to fly a dragon! Fortunately, the dragons we were going after didn’t need any special things other than hopping on its back. Unfortunately, I had to hop on its back! Trust me when I say doing this high up in the air while the dragon is attacking you is not easy! I fell more than once when I hopped off my current mount and missed the dragon’s back. Luckily, we were fighting over water and I’d just land with a slash instead of a splat.

You know the saying, “You can’t have it all”? That applies to Riders of Icarus, too. While there are definitely many that are, not all of the world’s creatures can be tamed. The tamable ones can also be mixed right in with the non-tamable ones, a fact I learned when we flew into that swarm of dragons looking for a conquest. To figure out which is which, you have to mouse over the mob and check the pop-up window in the corner of your screen.

Fighting in the unfriendly skies

Some games have mounts. Fewer have flying mounts. And fewer still have flying mounts that allow you to fight in the air. Riders of Icarus not only allows aerial combat, but the game is tuned for it. This definitely adds a new dimension of challenge. Fighting while airborn takes some practice. Not only is spatial orientation now a big issue, but all those skills and abilities you used while fighting on the ground disappear. Instead, you get to use a crossbow or a spear to fight. Although a little surprising at first, I appreciated how this made sense!

After acquiring our dragons, we went as a party of four to face a 10-man world boss raid encounter. Dodging that giant’s hits while trying to get close enough to shoot resulted in many a death as I was swatted from the sky. Still, I look forward to doing more.

Not all battles are in the skies, of course, and there are plenty of adventures to be had on your own two feet. We also dove into a story dungeon and I experienced some battles in there as well as learned some lore as the story played out. I was enjoying the non-action setting for combat (you can also choose action) on my Wizard, flinging fire and wreaking havoc. I am also curious to try a Priest. 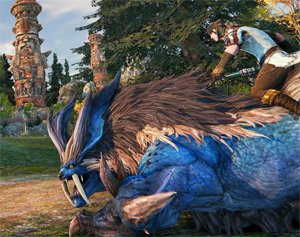 Beyond being mounts, your critters can be turned into pets. This is accomplished via looted scrolls found while adventuring. The process is insanely simple: click the scroll then click the pet. You need to be really, really sure you want to do this though as it is irreversible. So if you happen to transform your prized super uber rare fighting mount, you’ve lost it as a mount forever… or at least until you find and tame one again.

On the up side, you will still have it fighting along side you, just smaller and with different abilities. As adorable as miniature versions of critters are as pets, they are not just cosmetic. Like mounts, these pets can have various stats and skills, wear gear to improve those very things, and even level up and get stronger. Pets can be set to guard and protect or to aggressively attack any enemies in range. Mounts and pets can also be released if you no longer want them, or if you need room in your slots to collect a new one.

Instead of being turned into pets, you can also turn mounts into seals. These seals can then be slotted into your armor or weapons for various stat increases. Then if you happen across another that is better than what you have, you can just replace your current seals with the new ones. As if I really needed another reason to tame more adorable creatures!