The thing that bugs me about Overwatch is that it feels like half of a game. Unfortunately, it’s also the less interesting half, the part that you turn to after you’ve milked the core game for everything that it has to begin with. It’s a pity because the actual game is pretty good underneath it, but it’s going to have a very different landscape to deal with in several months when the initial rush of the game as itself has worn off.

My time with Overwatch has been limited to the actual retail release of the game, as I elected to avoid the beta; I didn’t originally intend to buy it, and the stated plans for the game’s development haven’t ever sat terribly well with me. I like the characters, I like the team setups, and I like the world that’s been built, but I would like to explore those in an actual game. Instead, what I get is Blizzard’s answer to Team Fortress 2 in terms of gameplay. So there’s a part of me that’s torn because the gameplay is great, but it’s being used for so much less than it’s able to sustain. 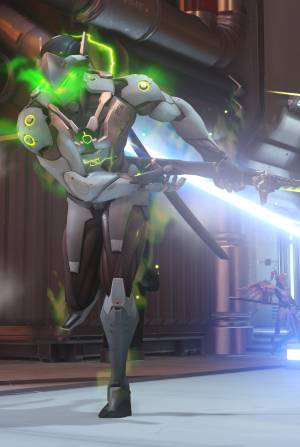 It’s only fair for me to say that team-based shooters in general and Team Fortress 2 in particular never worked their hooks into me. The lone exception to that was an iteration of Unreal Tournament 2004, and we’ll get to that in a moment. In most Blizzard games, the quick-match multiplayer is where I wind up when I’ve done more or less everything else I want to do, and even then I’m rarely invested; I’d rather set up a map on StarCraft 2 with AI opponents than get matched with someone else who’s going to plaster me against the wall. It’s not that I dislike PvP at all, just that I like to move between gameplay types.

Overwatch consists of nothing but that match-up gameplay. It has the option to play against the AI or to engage in random matches against other players of similar skill levels, which invariably means getting sniped in the face from across the map for a few rounds until you start learning what you’re doing. It’s to the credit of the gameplay that the curve between “why did I die” and “all right, counter-sniper maneuvers” is shallow enough that pretty much anyone can pick it up.

Make no mistake, every character has answers to snipers. The game has been sold on the strength of its initial roster of 21 heroes, and it can support them famously. A few of the heroes feel very much like slight twists on the archetypes of the aforementioned TF2, but even then characters feel distinct and functional based upon their commands and what they can do. No one feels overpowered or underpowered, even if certain characters have a bit more tendency to wind up making show-stopping Play of the Game highlights in the post-match.

It helps that the ability pool for each character is exceedingly shallow; you have, at most, three button commands and two fire modes for your weapon. Thus, you quickly learn your own abilities and how they work in concert with those of your opponents. It only takes a couple of matches to have a sense of how long Reaper’s intangible drift will last or to know that danger is coming when you see Bastion roll out his treads. Similarly, you’ll get a sense of how to deploy D. Va’s meka explosions to maximum impact or how best to take advantage of Mercy’s field-wide resurrection ultimate.

In the multiplayer mode that makes up the whole of the game, more customization would ruin the effect. It would upset the finely tuned balance between the characters, and it would distract from the sheer kinetic push of the game. Ironically, this is the sort of multiplayer shooter that DOOM‘s multiplayer wishes it were, with every moment being kinetic and fraught with activity. You have to make quick decisions that never feel overwhelming, and while you have a limited set of tools, it becomes a game of adapting those tools to the situation.

Or, obviously, swapping to a different tool. The most fiddly part of the game is swapping heroes, but even that is handled quite well, and it works perfectly as an on-the-fly change. I’ve had matches in which I’ve never needed to change and matches in which I’ve changed several times as the environment has shifted, and both feel satisfying and interesting.

Unfortunately, that perfect set of 21 heroes is more or less the only thing that the game has going for it. The progression system for unlocking various hero customizations is painfully random, getting duplicates of things you already have feels like more of a penalty than it ought to, and there’s little insurance to help you get stuff for heroes that you actually play with any level of skill. That’s not helped by the fact that two of the big custom unlocks (emotes and voice lines) were, by default, not bound to anything when I installed the game, making them feel something less than rewarding.

You can, of course, just buy additional loot boxes at rather reasonable prices, but that does little to ameliorate the sense that the advancement is really just a patch slapped on to make you feel as if you’re getting somewhere. It rankles me a bit more for all of that; I’d prefer to just be told that my objective is to win this map and that’s it. Having progression that feels like an afterthought seems more disingenuous than no progression whatsoever.

The maps themselves, on the other hand… well, now’s as good a time as any to mention why I actually did get into Unreal Tournament, which comes down to the fact that the game had some astonishing map types. Assault, Onslaught, Mutant, Bombing Run, and so forth on top of the more pedestrian modes meant that my usual compunctions melted down. It’s a lesson that Overwatch could learn, as the game’s current dozen maps feel more or less exactly the same as one another.

They’re not the same, I should note. But each one has one of three objectives, and the fact is that I could not if asked remember which one was which. Each map has all of the features scattered about that any given hero could want to make use of, which is nice, but there are very few bits that feel terribly memorable or interesting. It’s always a matter of standing on the payload until it moves to the end of the map, defending/attacking a pair of objective points, or fighting over a node for as many rounds as it takes for one side to win. 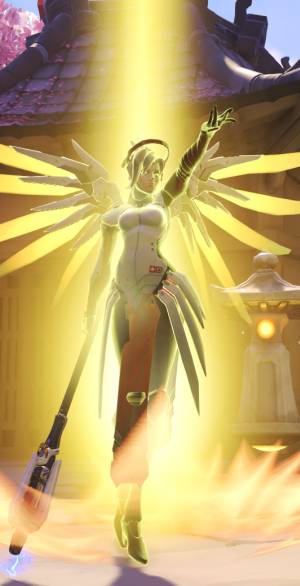 I’m fond of the payload maps and think that they’re the best of the lot by far, giving players a more interesting set of objectives than just “stand here for a while,” but even they tend to run into the problem of being essentially identical. Defenders want the payload to never move, attackers want to stand by it, and it’s only that motion and the checkpoints that make it more interesting. Once again, it comes down to that core selection of characters being the entire underpinning of the game; remove that or replace it with a weaker selection, and the game loses its charm and its appeal.

Therein lies my primary complaint with Overwatch. It’s not that the game itself is bad. The moment-to-moment play is good, even excellent at times. It has all of the marvelous feel of the best multiplayer shooters on the market. But it also has nothing more on offer, nothing to make me sit up and say to you that you should play this game instead of the free-to-play and equally personality-driven Team Fortress 2, save for the fact that this game is newer.

In some ways, it feels like the logical inverse of Battleborn. The supply of content for Battleborn with the elegant gameplay of Overwatch would be a thing of beauty. As it stands, because they’re both multiplayer shooters in a similar vein, gameplay is going to trump content. There are too many satisfying and diverse moments available in play to stop Overwatch from nabbing that prize quite handily. But it’s also new and shiny, and I find myself wondering how the game can sustain itself over the longer term, especially once players start growing accustomed to the roster.

As I said, Overwatch feels like half a game. I don’t doubt that it’s going to keep everyone’s interest over the next couple of months, and it has some potential. But it needs more than just new maps that spin off of the same setups, and it needs more than the competitive format to give it any long-term staying power. It has a great deal of potential, yes, but time will tell if it delivers on any of that.