It’s been awhile since I’ve been excited for a Rare game, but pirate-themed, multiplayer sailing-and-swashbuckling game Sea of Thieves took hold of me just based on the concept we heard last year at E3 2015. I knew this year the game would be shown in some capacity this year, and indeed I was pleased to get to interview Rare Lead Designer Mike Chapman and get some hands on with the game. I wasn’t disappointed.

Through the E3 videos, if we ignore some fairly “exaggerated happiness” presented in the videos, there are some good glimpses of something beyond a simple vehicular PvP game, which was what motivated me to dig into what the game was trying to do.

During my hands-on with the game, it become fairly apparent that even in the demo, fun is paramount. If the game were simply about combat — like, say, LawBreakers — I don’t think it would include a way to get so drunk that just standing becomes difficult. It wouldn’t have musical instruments that have no obvious player/stat benefits. And we would have been placed directly on the ship, rather than in a tavern where we could potentially leave someone behind (which nearly happened).

And that was just the start of the teamwork we’d need. Once on the boat, my demo companions and I had to raise anchor. That turned out to be pretty important, as one ship somehow dropped anchor during the fight, turning it and its sailors into sitting ducks.

As shown in the video, players need to call out directions to the guy or gal steering the ship, but we also had to call out where the enemy ships were coming from. I had a little time with that mechanic during the demo, and sailing felt easy enough. Though I was also sailing with the wind, not against it, neither of our captains ever noted any difficulties with steering aside from being blind without help.

After a short trip out from the dock, we found an enemy player crew. We suspected that we couldn’t damage the enemy boat’s sail, so we coordinated attacks on the hull of the boat, especially as we noticed we’d taken on some water ourselves. To help stay afloat, our characters were equipped with pieces of wood that we could use on the second and third lower floors of the ship wherever we found a leak. As people repaired the ship down below, those on top reported where the enemy ship was coming from. I thought we had done pretty well, as we were able to sink the enemy ship, but sadly we’d taken on enough water for the fight to end in a double KO. No one seemed upset about the loss, though, and once we escaped the wreckage, we were transported back for a second fight, most likely so the demo wouldn’t get boring. It was probably the most coordination I’ve seen during a team-based demo in a long time, but the game was hardly a serious business or overly competitive game. That’s a pretty good sign to me. 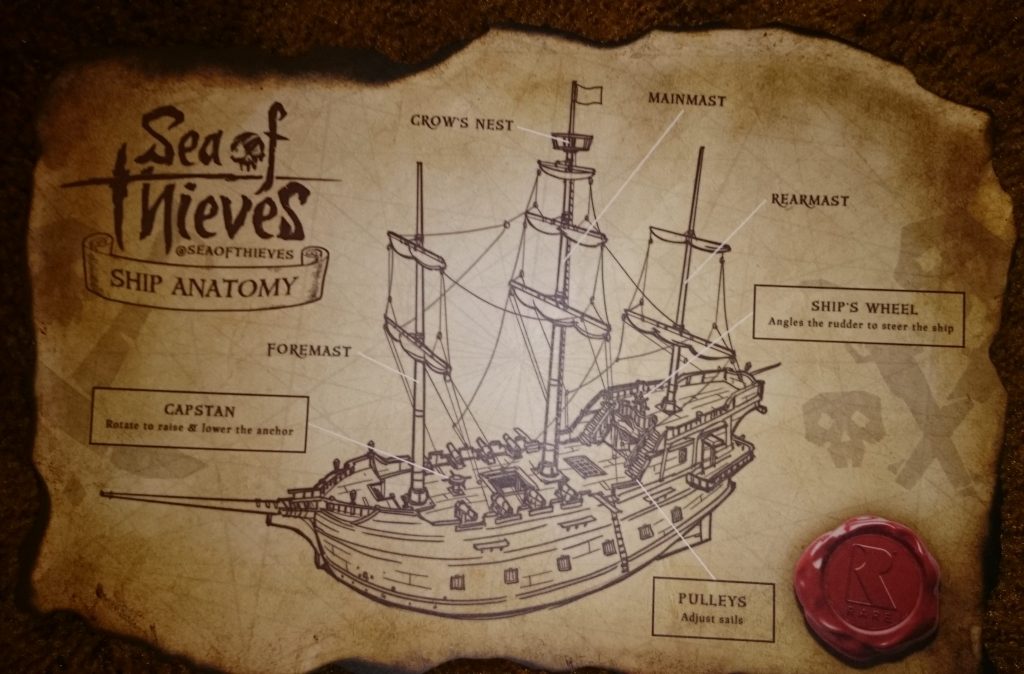 Throughout my time watching and speaking with Rare’s Mike Chapman, I noticed a clear attempt to avoid the MMO label, which he mentioned as being a vague term these days, and that’s hard to argue against. Chapman thinks of MMOs as a series of abstracts and dice rolls, and whether or not you agree, what Sea of Thieves provides is an open, seamless world as in a sandbox, though there will be ways to match-make to find friends… or to play alone in a solitary ship, though doing the work that other players would normally help with means you’ll have that much more to do yourself.

And don’t let the combat demo fool you too much: The demo is simply a “slice” of the world, so don’t think it’s just ship battles; that’s just the easiest part of the game to show in a short demo. There’s also exploration and questing, but don’t necessarily assume you’ll have to fight other players for buried treasure a quest may have led you to. Combat is only one small part of the Sea of Thieves experience. Rare wants the game to be immersive, but it isn’t talking about just how PvP-centric everything will be just yet. 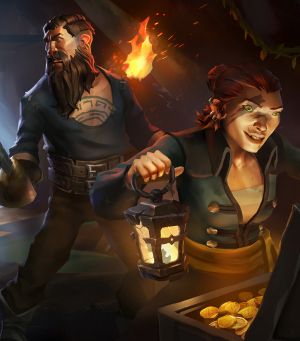 I was, however, told that exploration and quests are a “massive” part of the experience, and players will be able to find lost islands and treasures and engage in non-combat activities. For example, with the music system, players will be able to play different tunes depending on what they want to convey. The first player plays “lead” and everyone else is support.

When I asked about building ships, I was told it isn’t something Rare is talking about yet; the developers have ideas of what they want to do, apparently, but they want to see how players react to the beta first.

And though Rare has said that the game will be part of the Xbox Play Anywhere platform, Chapman says other platforms are still under consideration, though the game will at least be on Xbox One and PC, which already gives it an advantage over console-only games like Destiny in terms of appealing to the MMO crowd. Despite trying to avoid the tag, I got the feeling that the game is aiming for MMO fans but wants to avoid the negative connotations associated with it. This might also be why server size, crafting, and PvP weren’t topics we could discuss, as perhaps mentioning those might make the game seem too MMO-like before enough features could be checked with players. Either way, it was clear that the game is supposed to be charming, not hardcore pirate-y realistic, which is intended to appeal to a wider variety of players.

In the end, the game could turn out to be little more than a fun lobby game that supports a variety of gamplay options. But Chapman always had a coy smile on his face when I was connecting the dots between Sea of Thieves and features we generally associate with MMOs: persistent worlds, non-combat social gameplay, and gameplay’s role in socialization. If it’s just a lobby shooter, it’s clearly one that aims to do something more than just throw players at each other for blood the way most shooters do. As someone who loves using sprays mid-match in Overwatch, I’d be on board for just an enjoyable vehicle death match game, but the emphasis on quests and exploring points at something much deeper.

Massively Overpowered is on the ground in Los Angeles, California, for E3 2016, bringing you expert MMO coverage on The Elder Scrolls Online, Black Desert, and everything else on display at this year’s Electronic Entertainment Expo!
Advertisement

The Daily Grind: Is it time for a Wheel of Time MMORPG?