Really, I blame my parents for not being filthy rich.

If they had been, we could’ve afforded the $130/month unlimited subscription fee to the ImagiNation Network (INN) back in the early ’90s. Just think! All of the gaming, the socializing, and the roleplaying that I could handle — for such a low price! I mean, sure, there were hourly options, but who’d want to play for a mere five hours a month?

So instead of becoming part of a growing online community, I had to be content with my SNES and copy of Chrono Trigger — hard times, indeed. Sometimes I think how my life would’ve been different if we had subscribed to Sierra’s colorful online world because I would’ve had a chance to get in on one of the first graphical MMOs: The Shadow of Yserbius.

It was a step forward in graphic quality from the text-only MUDs of the day but perhaps a step backward from the complexity that many MUDs brought to the table. Still, for a few shining years, it entranced thousands who lined up to delve dungeons deeply alongside their friends (and a couple of complete strangers with odor disorders).

Today we’re going to take a quick peek at one of the first MMOs that stepped into the realm of lush color and animations and see what made The Shadow of Yserbius so endearing. 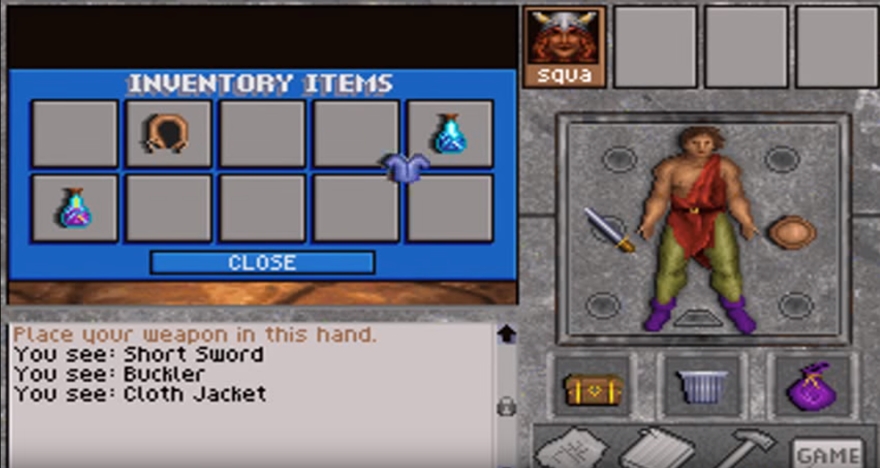 Once upon a time…

… in a land far, far away, an adventurer heeded the call to put an end to En-li-Kil, who lived in the middle of a smouldering volcano. The adventurer was weak, but he knew he could grow in abilities and power by questing through many strange locales in the world.

So he did what any adventurer worth his salt did by starting his quest at the local tavern. There he heard the gossip of the day and — hopefully — found a few hardy friends to join him in this mission.

The team having been assembled, the foursome plunged into the dark caverns at the base of the volcano, working their way closer and closer to En-li-Kil… and their destiny.

Pick a race, pick a class — is there anything more essential to the modern MMO character creation experience than that? For players who bemoan how little there is to do in character creation these days, back then it wasn’t that much better. Yserbius let you pick your name, your race, and your class and then shoved you out into the world without much ceremony.

The game offered a selection of eight races, each of which boasted slightly different starting statistics: Humans, Elves, Orcs, Trolls, Dwarves, Gnomes, Halflings or Gremlins. Then came the “guilds” (read: classes), each of which had four unique skills available to it. The guilds included Barbarians, Knights, Rangers, Thieves, Clerics and Wizards. Really, it was the basic Dungeons & Dragons template that we’ve come to know and love.

Additionally, players were given the choice of one of two alignments: harmony or chaos. The alignments simply restricted access to certain items and areas while giving you special access to others.

Spells were automatically added to your roster as you leveled up, although you had to spend spell points to increase their potency. There was a danger of shooting yourself in the foot, however; if you put too many points into a spell, you could raise it up to such a level that it would be too expensive for your character to cast.

The Shadow of Yserbius offered both online and offline play. The key difference was the multiplayer aspect of the online version, which allowed up to 60 people to meet, mingle and m… m… I can’t think of a good dungeon-crawling word that starts with “m.” Mosh?

Outside of the roleplaying and socializing that took place at Yserbius’ taven, the bulk of the game was a lengthy dungeon-crawler through the titular volcano. Hidden doors could be revealed by spells like True Seeing, treasure was unearthed, and monsters were confronted.

As was typical in MUDs and RPGs of the day, Shadow of Yserbius’ combat was strictly turn-based. The players would get to choose from a variety of abilities — attack, spells, items, skills, fleeing — and then the enemy mobs would respond in kind. Instead of consisting of one-on-one fights, combat was conducted between entire parties represented abstractly by portraits on the screen (the main window would show a bigger portrait of the main enemy, which was animated to some degree).

“I found my palms sweaty on several occasions, especially during the Quest of the Four Parapets,” one journalist wrote in a 1993 issue of Computer Gaming World. “The final battle took about a half-hour and was nip and tuck for a party of 19th to 35th-level players.”

If you look at the screenshots here, you’ll see that both enemies and players could occupy one of six positional spots: four front-row and two back-row positions. Back-row spots were safer but limited to using ranged attacks, spells or weapons with a longer reach (like a spear). During the fight, players could move to different positions like in a game of chess — deadly chess. Assuming that the party won, the treasure screen would open up and let you select a choice piece of loot from a wide selection.

The death penalty was pretty light for the time. A party wipe simply meant you’d have to restart your adventures from the top of the dungeon, but you could keep all of your XP and items.

The dungeon wasn’t 3-D at all but rather was a static 2.5-D view that could be navigated by arrow keys. The game had a semblance of questing to be done, often to find a special item or discover a certain location, but combat was the core of the experience. Players also were encouraged to draw maps of the game by hand to complement the one in-game.

You could only go so far until your character leveled up, at which point you’d exit the volcano to head to the Guild Hall to distribute your newly gained attribute points.

The players did use the tavern and guild hall to socialize, and there was even romance in the air. “Many players go around in pairs and flirt while playing,” CGW wrote. “Women can expect quite a bit of attention under the volcano, given a friendly nature.”

The Shadow of Yserbius was a modest hit for the fledgling INN, which quickly commissioned two sequels: The Fates of Twinion in 1993 and The Ruins of Cawdor in 1995. Unfortunately, AOL bought the rights to Yserbius in 1996 and killed the game because Yserbius was competing with its own Neverwinter Nights. Dedicated fans could still play the offline version, of course, and fond memories of Yserbius continued well into the next decade.

In 2007, a team of dedicated fans even tried to bring back the entire INN — including The Shadows of Yserbius — under the banner of the ImagiNation Revival Project. It’s hard to tell how successful this was, but clever game detectives may just be able to snag their own client to relive past glories. Fans also have kept the torch burning bright over at Yserbius.org, where the game is still played and discussed daily.

And speaking of discussion, we want to hear your tales of epic Yserbius adventures! If you were fortunate enough to play this back in the day, leave a favorite memory or two for us down in the comments!