At this year’s E3, I sat down with Elite: Dangerous’ Senior Designer Sandy Sammarco and PR/Communications Manager Michael Grapper to talk about the game’s successes and stumbling blocks. Before jumping in, let’s get the Engineers delay out of the way: Sammarco told me it stemmed from the team just not feeling the progress made by the original due date could have been better, so the team opted to hold it until it was up to par. While it may have been frustrating that the update came before a three-day weekend, it wasn’t to dodge potential complaints.

In space, there’s a whole lot of nothing

Much as you’d expect in real life, there’s a lot of empty space in, um, space. And Frontier says it hears that a lot from players who haven’t been playing for a long time. They forget that the world’s based on hard science, not a fantasy, which means space is pretty empty. That’s part of the appeal of the game. And as in the Engineers update, Frontier can take that space and fill it as it progresses through their feature goals. Elite’s a big game, and Frontier wants to make it bigger.

In fact, that emptiness was one of the issues Engineers was meant to fix. Another issue was the game’s difficulty. While the recent issue with AI slaughtering players mercilessly was the result of a weapons bug and network connection error that wasn’t caught during beta testing, the plan is still to add hard but beatable gameplay. Frontier says it uses its own metrics and ideas of how challenging it wants content to be. The team previously felt that high-end encounters were “lacking,” for example. But in the aftermath of the system going “Skynet” and corrections being made, the team’s happy with the corrected level of difficulty introduced in the update. It’ll be interesting how things might change in the future though, as Gapper mentioned plans to look into how Elite may or may not work with the new Xbox Play Anywhere platform. Crossplatform play was something that came up in my interview last year, but there was concern that one platform may have an advantage over the other. 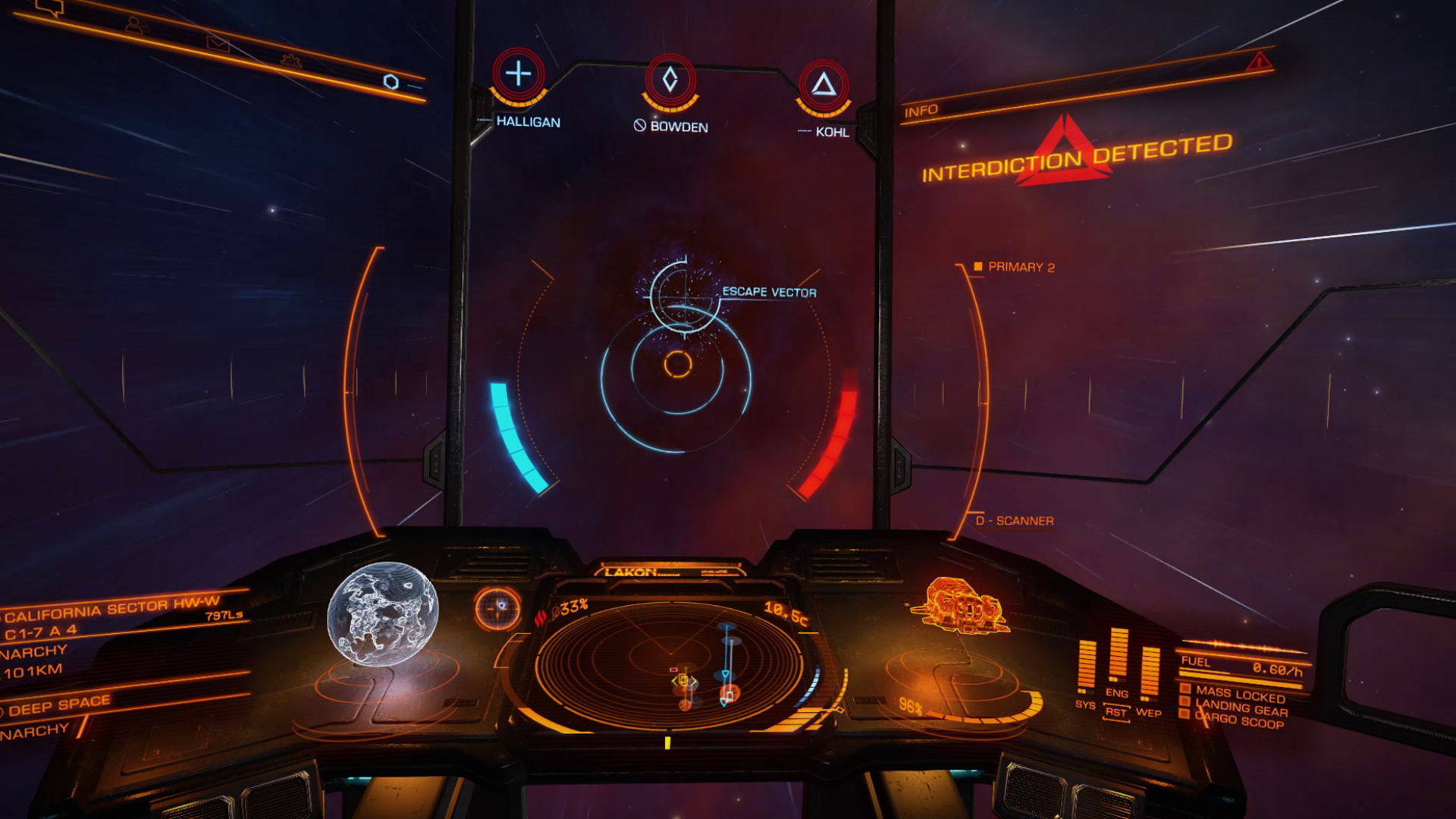 My Elite VR experience wasn’t as impressive as I’d hoped, but maybe that’s partially because most of it was similar to the combat simulator I tried at last year’s E3 and to my experience with War Thunder’s VR this year. Like Gaijin, Frontier treats VR players and non-VR players the same way, mostly because they view the addition as an immersion device. Exiting the landing zone was interesting, and I guess being able to look around for my enemy was useful, but piloting (even using really nice joystick setup) still takes a while, plus I’m a terrible shot with or without VR in the equation.

I was mostly happy that I didn’t get too motion-sick. Maybe some other kind of gameplay (like the new planetary combat) would have left a better impression on me, but at the very least, I can say that the VR experience did add to the immersion, especially when paired with joystick with separate throttle control. The price of that immersion, however, it a bit rich for my blood, but if you can afford it and enjoy a solid space sim, I wouldn’t blame you for shelling out. 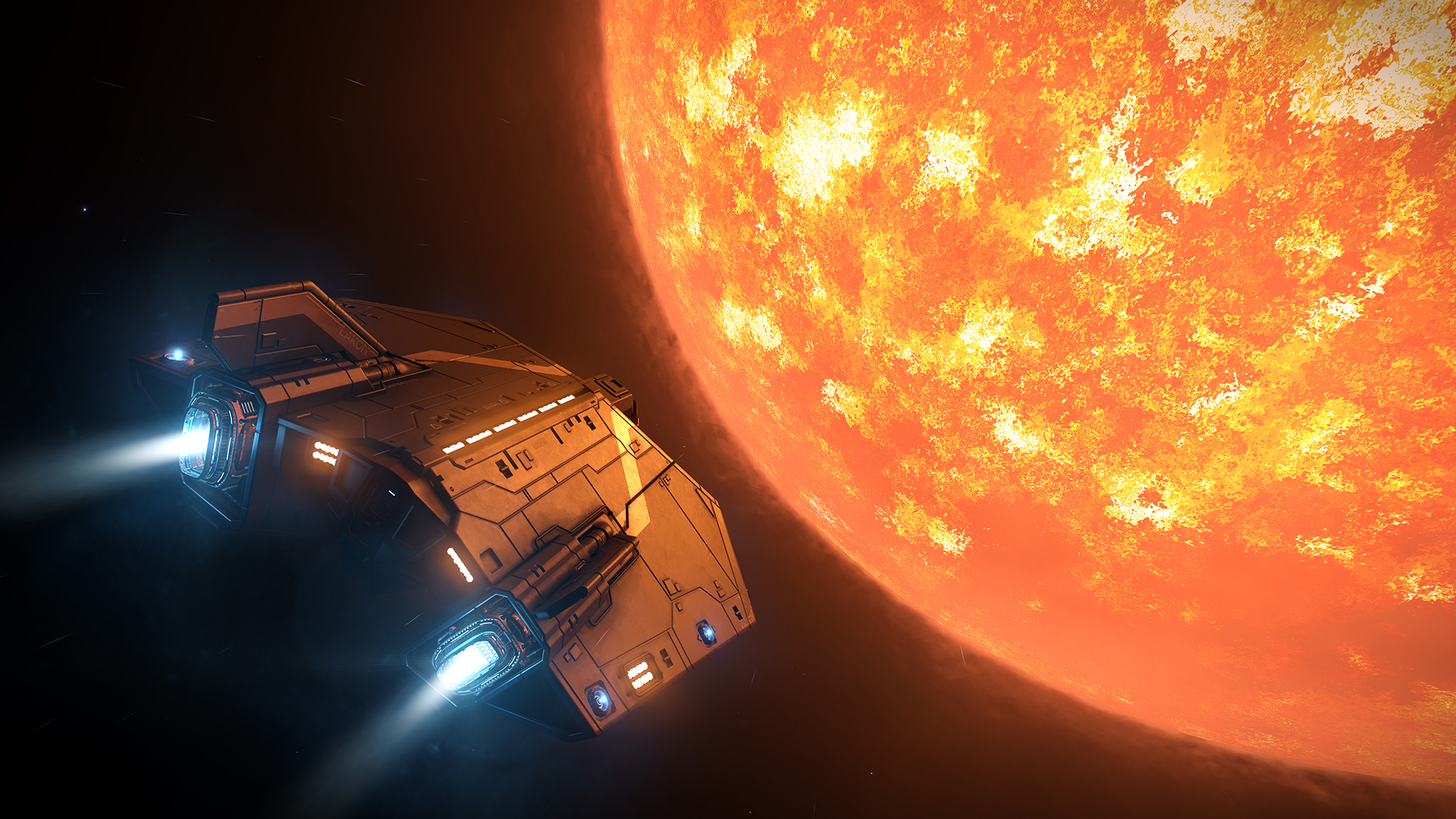 More on the horizon

While I don’t play Elite regularly, I think the idea of having a lot of systems in one space game is really appealing, but it’s also scary to me, so seeing Elite do it first (or at least ahead of Star Citizen) feels like I’m watching some guy cutting a path for the caravan behind him.

At any rate, I was told that captain customization is still in the works, but don’t assume that means on-foot content is following shortly after that: It’s only a very small step toward non-ship avatar based gameplay. One thing Frontier wants is to give players the ability to look across your ship and see your friends, perhaps in a similar way to the VR Star Trek game (at least as far as what we know of it).

Multicrew ships are still in progress, and when that comes, it’ll be a big update. However, Frontier says multicrewing is seen as something big cargo ships can make use of to defend themselves, and while I couldn’t get a number, Sammarco did emphasize that some carriers would be able to house ships — plural. I was also told it will be “madness” for launchable fighters and multcrew ships to “not to see how they click together– they will click together — in some as yet unannounced way.”