I knew that new races would eventually come to Landmark! From the beginning it didn’t make any sense to me that Daybreak would ignore something the community really wanted, especially when it obviously had the models already made. The studio showed them off quite publicly. Later, with the (total suckage) cancellation of EverQuest Next, I couldn’t fathom letting those assets go to complete waste. Surely they would come, perhaps at launch.

Alas, races did not accompany launch. However, with the addition of the Crimson Parlor, an in-game customization station, and the various NPC races, I knew it was only time. I was sure that Landmark would indeed add other playable races. And I was right! It’s a glorious day, right?

Uh, well… What I had hoped wouldn’t happen in all this, unfortunately did: Access to these new racial looks is gated behind the cash shop. So you can have some new races, but only for a price. For now. And I am hanging my hope on that last little tidbit because Daybreak really needs to do something to engender goodwill – and soon.

Putting on a new face

For those who haven’t followed this latest announcement, you need only know that Landmark’s latest update went live on Wednesday and introduced appearance options that will let players fashion their characters to look like elves, dark elves, orcs, or any combination thereof. There are new skin colors, pointy ears, slanted eyes, horns, and protruding teeth. There are four new face types for each body gender and size. Some of these options look very nice and are certainly welcome. (Well, maybe not the teeth so much.) What hasn’t been very welcomed by the masses — and we’re not talking about Landmark’s current community here — is that these options are available only via purchase in the Marketplace.

Called the Fantasy Parlor Pack, it will cost 499 DB to unlock these fantasy customization options in-game. The options are not available at character creation; Emily “Domino” Taylor’s Q&A explanation was that it’s meant to avoid confusing players who don’t own the new appearance pack. [Edit: Whether it was a bug that prevented it when I first tried or things changed in the patch, as of July 1st it is possible to preview all the appearances at the Crimson Parlor before buying.]

On the plus side, these packs will be tradeable after a short waiting period, so you can buy them and give/sell/trade to other players. As with any character appearance change, an actual switch will cost the player lumens, the in-game currency, at the Crimson Parlor. The maximum charge for changes is currently 30 lumens. As long as you have the lumens, you can change your appearance as often as you like.

Another positive is that more packs with even more options may become available in the future if this one proves popular enough. I am all for more customization, and I do hope it is popular. I myself will be getting one, but I will be using old station cash I’ve had for years since the last triple-SC days.

But this announcement hasn’t exactly been met with open arms from the gaming community at large. The bitter-over-the-loss-of-EQN crowd is huge, and there are still plenty of others who nurse SOE/Daybreak grudges for other things. And this announcement was adding fuel to the fire/pouring salt on the wounds. I am not the least bit surprised that the official announcement has replies locked up tight; folks have not exactly jumped for joy over this announcement. Oh, many have jumped all right, but it was not to a happy place. It might actually have involved pitchforks. 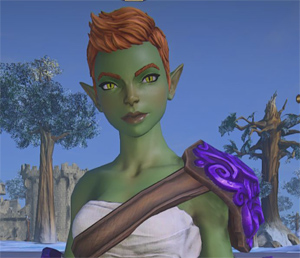 I get that Daybreak needs to make money to survive. I want Daybreak to survive because it makes games that I enjoy and don’t want to lose. I really and truly want Landmark to succeed; I have always appreciated what the game was and had hopes for what it could be unrelated to my wants/desires/dreams for EQN. I get that the studio needs revenue. But what it needs most right now is some good feelings from the community. Revenue doesn’t come so much when the community is feeling slapped in the face. This announcement does not bring good feelings. Lately it seems like the studio is not just stepping in bad PR at each turn, but actively looking for piles to jump into.

That said, I still think there is a way to fix this a bit, and it all hinges on one line in the Q&A:

Q: Will it be possible to purchase the pack itself with just Lumens?

A: Not immediately anyway. The popularity of the pack and other factors will determine what happens in the future.

If this appearance pack stays purely a cash-shop item, that’s just adding insult to injury. I totally agree that it comes across as just milking players. No one likes that feeling. No one likes being treated that way. However, if this pack becomes available in-game using the in-game currency later, I can get behind that. I am not just talking about being resold by players who purchased it from the cash shop either, but truly available through gameplay. I like things being available through gameplay, even if it means I have to wait. If those who don’t want to wait to enjoy the feature can do so by tossing some cash at the company, I am totally fine as long as others also have the chance later down the line.

I think this option is all the more important because it happens to be about racial appearances instead of just any random cosmetics. I am all for cosmetics being sold in the cash shop. But by that I mean clothing and accessories. I am totally fine if there are certain outfits that are available only in a cash shop, especially if there are comparable types or styles of items available through gameplay. (Notice I didn’t say exact!) However, I feel that something as basic as racial appearance should be a given part of the game. It is a fundamental. I don’t like races being gated behind a permanent paywall, so why would I be OK with racial characteristics being so?

I am hoping Daybreak does the right thing and does make the pack available without a cash shop connection in the not-too-horribly-distant future. . [The feature works now!] If not, then I will be saddened. I will believe that Daybreak truly lost a chance to do something that could give it a little bit of good PR. I don’t think that the studio is evil incarnate, and I know that plenty of devs care about the game and players. But man, we really need to actually see more of that. Every little bit of goodwill helps, and there is currently too little of it.

Elyon opens up a third European server as it fights for...

What we learned from Guild Wars 2’s Specter, Untamed, and Mechanist...

The Daily Grind: If you could remove one World of Warcraft...