END_OF_DOCUMENT_TOKEN_TO_BE_REPLACED
We know now that patch 3.35 and the Deep Dungeon will be landing on July 19th. That’s a little bit later than I had expected, but it doesn’t change one of the fundamental things that I’ve been observing with Final Fantasy XIV: The next few months are going to be absolutely golden for the game. If you’ve enjoyed Heavensward, this is the time to really sit back and bask in the game because it’s going to be a good time to explore what it has on offer.

I freely admit that this might seem like an odd statement when we know that we’ve still got plenty more to see. And it’s important for me to say that I don’t think the subsequent patches are going to be bad; far from it. We’re going to have a lot of fun when the next patch drops around October or late September, we’ll have plenty of things to do when the next patch after that hits in February of 2017, and the expansion launch in June of 2017 will be fun times. But the next few months are going to be among the best times to be adventuring around Ishgard. Why? I’m glad you hypothetically asked.

Let’s start with an assertion that might seem a bit odd. When Heavensward launched, it was thin.

At face value, that’s nonsense. There was tons to do in Heavensward right from launch. Plenty of quests, an elaborate endgame for crafters and gatherers, stuff to do for combat classes, a slow roll-out of the top tomestones, loads of lore, all of that fun stuff. Indeed, you could use the 3.0 rollout as a textbook example of how to handle an endgame rollout, especially by ensuring that players didn’t just immediately rush to the level cap and start earning Esoterics. I had loads of fun at that time, and I’m thankful for every part of the design that went into that period of the game. But I would still say that it was a bit on the thin side, and the reason is simply one of time. The game hadn’t fleshed out yet.

In a patch cycle, the middle is the best place to be. It’s enough time that the designers have a solid handle on the classes and their capabilities, the difficulty of content, the good ideas and the bad ones, and so on. There’s space to explore, to try some unusual ideas that might need later refinement. There’s stuff to do to fill out the initial leveling rush. There’s space to grow. And grow is what Heavensward has done, not just upward but also outward. We’ve got our beast tribe quests to fill our our leveling paths now, we’ve got side-stories and reasons to run older content, we’ve got a collection of dungeons to be run at the 60 tier beneath the Expert roulette. The whole thing feels full.

When the Deep Dungeon comes out, we’re even going to have an entirely new sort of content available to us, something that literally has not existed before now. It’s going to mean a new way to level and explore the game. And that’s great. It encourages doing things that you haven’t done before. It provides another alternative for players to enjoy. And it means that the middle of this patch cycle looks more diverse than the middle of the patch cycle pre-expansion; instead of having reasons to run a roulette and a Crystal Tower segment, you have reasons to run multiple 24-person runs, Alexander, probably the Deep Dungeon, expert roulettes, and so forth.

I don’t mean that we’re going to suddenly have a dearth of content in 3.4, but once that patch drops, it’s the beginning of the end. We’re on the path to be done with this expansion and start preparing for the next. And that’s also fun, but it’s a different type of fun. It’s the time when we know the shape of what’s coming next. We’ll know at least one of the jobs coming with the expansion and can start planning for it. There’s the understanding that items you get now are, fundamentally, preparing for 4.0 and beyond rather than the next tier of content. Stories will begin wrapping up, not just the ones that focus on the MSQ but those that focus on side characters. 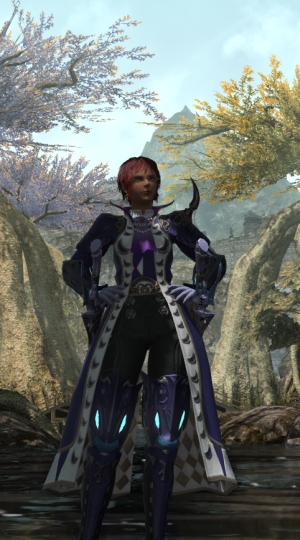 The middle of the expansion is when things are nice and round. They’re full. There’s the knowledge that yes, the expansion is on the horizon, but it’s far enough off that it is not your pressing concern. It’s possible to just enjoy what is instead of what will be.

The next couple of patches are going to have the satisfaction of completion mixed with the anticipation of setting up for the next big thing, and that’s going to be fun. We’re going to see what our next destination will be, what sort of challenges are around the corner, and at the same time we’re going to be getting our current problems solved. But there’s never going to be another time in which so many pieces of content are simultaneously relevant, present, available, and engaging. I don’t think that’s sad, but I do think that’s noteworthy.

We are, by our very nature, forward-looking. We know that more stuff is coming into the game. You can’t help but focus on that; I don’t blame anyone who sees a new job announcement and thinks, “Oh, that’s going to be my new main job.” But that detracts a bit from enjoying what’s right now. Sure, I can say I’m looking forward to the next big thing, but as of this writing I don’t know what the next big thing is. I’m looking forward to it as a concept, not a reality.

So when the Deep Dungeon comes out, enjoy it. Sure, we’ll probably get more with it, and if it’s a hit (and I dearly hope it is), we’ll see more done in that format later on. But enjoy what it is when it goes live. Explore it. Form groups and dive in. Enjoy the occasional failure and setback and saving your progress as you go. I certainly intend to. I know that the end has to come around, but I like the richness of existing in the middle of Heavensward, when we’re just able to bask in being there.

I’m also really hoping that we’re not done with beast tribe quests, even though I know we almost certainly are. Seriously, I want Gigas quests. I want Mamool Ja quests. I even want Goblin quests. But I think we already got all of those that we’re going to get. At least the birds never have a shortage of need for dance fights.

Feedback, as always, is welcome in the comments below or via mail to eliot@massivelyop.com. Next time around, I want to talk about some of the big failures in this particular set of MSQ storytelling, now that we’re out the other side of the Dragonsong War.