END_OF_DOCUMENT_TOKEN_TO_BE_REPLACED
With Star Trek Online: Agents of Yesterday, Cryptic is obviously looking to rope in as many Star Trek faithful as possible, particularly from two camps that haven’t been serviced by the MMO before: fans of the original Star Trek series (TOS) and the audience from the newer Star Trek movie reboots.

While I have deep reservations about touching upon “JJ-Trek,” as it’s labeled, I think that the concept of this expansion is a great one. Using time travel (a Trek staple) to hop back and forwards and sideways in eras to look at something other than the 25th century is — to borrow a familiar Vulcan’s catchphrase — fascinating.

Since I’m going into this new expansion mostly blind, I thought it’d be noteworthy to jot down my thoughts on the first six missions that are exclusive to newly created 23rd century starship captains. What will a trip back to the time of Kirk be like? I don’t know, but I do love the storytelling in Star Trek Online, so I’m sure to be entertained. Read on!

After spending way too long creating a new Tellarite Starfleet officer — this is Cryptic’s character creator, after all — I begin the game in the 23rd century on board a ship that looks quite familiar. The team has the looks and sounds of TOS down pat, and all I want to do is explore the ship and get in touch with my former fandom of this show.

The Taurean Affair has a lot riding on it as a mission. It’s both the tutorial for the new “23c” characters (as they’re being called in-game) and the introduction to this era. There are a lot of things to note right off the bat, including the grainy filter put over the camera (to make it look a little like the old show) and some of that not-so-catchy music from the series.

Like many Star Trek Online missions, this one balances between ground and space modes. Players are taken down to Taurus II, the site of the classic episode Galileo Seven, and put through the tasks of clicking on, talking to, and shooting things while the homages keep rolling in. I got a kick out of a red shirt dying early on to a massive spear thrown by one of the hulking natives.

Soon enough, we’re back on the ship and fighting some Klingons who thought they’d use the planet as a trap of sorts. The real treat is when the Enterprise swoops in, bringing the full cast of characters that we knew and loved from the show (although only Chekov has any new speaking lines due to actors’ availability). The whole shebang ends with some R&R at an older Earth Spacedock, where the keys of the ship are given over to the player and everyone gets to hobnob with the Enterprise crew (except, oddly enough, Kirk). 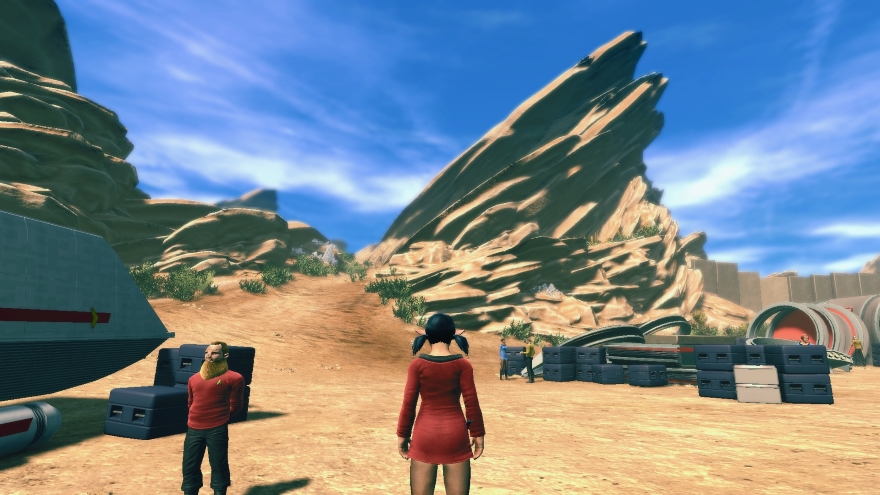 In the Shadow of Cestus

Your first mission as a newly appointed captain is to head to Edren IV and assist the Federation surveillance team there. It seems that the Gorn have landed as well, and while the Feds are there only to check out the minerals, something or someone has stirred up the Gorn something fierce.

As you can tell in the picture above, this mission makes good use of one of the more iconic Star Trek filming locations: Vasquez Rocks, the site of Kirk’s solo battle against the Gorn in “Arena.” Similar to the previous mission, this one pays homage to the classic episode while providing a slight twist on the matter (hint: there may be more than just Gorns lurking about). And, oh yes, you’ll be making some ol’ fashioned bombs.

I was still tickled by the spot-on use of the old timey visual and sound effects. At times, you could almost lose yourself in the mission and pretend you were watching another episode of TOS. Then again, the appearance of Ensign Hunter — who looks suspiciously similar to a certain time-traveling meddler we recognize from Star Trek Enterprise. 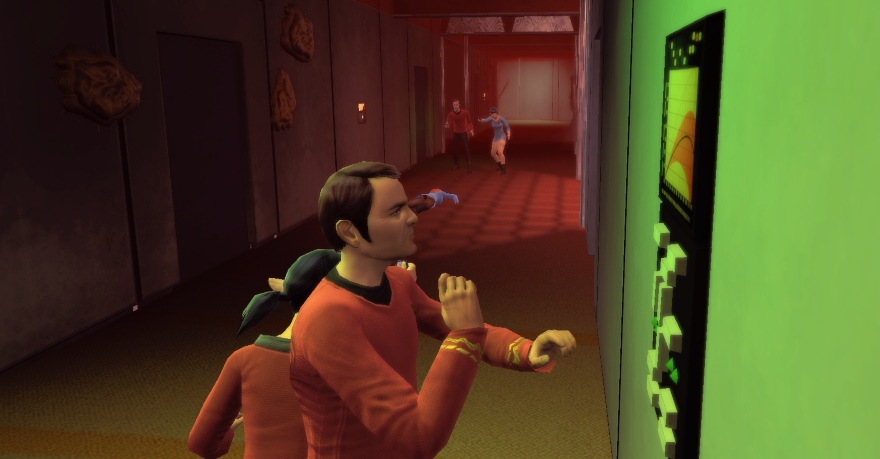 Deep Space K-13 has gone silent — a little too silent — and the crew of the U.S.S. Pickled Worm is sent to investigate. What? I’m terrible at picking ship names, sue me.

The silence is due to a parasitic infection that’s taken over not only the station but two Federation ships in the area. This time around it’s a reprise of “Operation — Annihilate!” and those classic “rubber vomit” critters that force people to turn against their allies. The good news is that Scotty is on the station and is free from parasitic control, which means that he can come up with ingenious plan after ingenious plan while I just blast things with my phaser. I’m very, very good at blasting.

The mission gets strange at the end, when aliens are shown to be watching and interfering with the events. Ensign Hunter reveals himself to be Daniels (shocking!), a temporal agent from the future, and says that these bad guys are the Na’kuhl. But enough exposition, there’s a space battle to be had, at the end of which K-13 is sucked into a temporal anomaly, never to be seen again. Or will it? 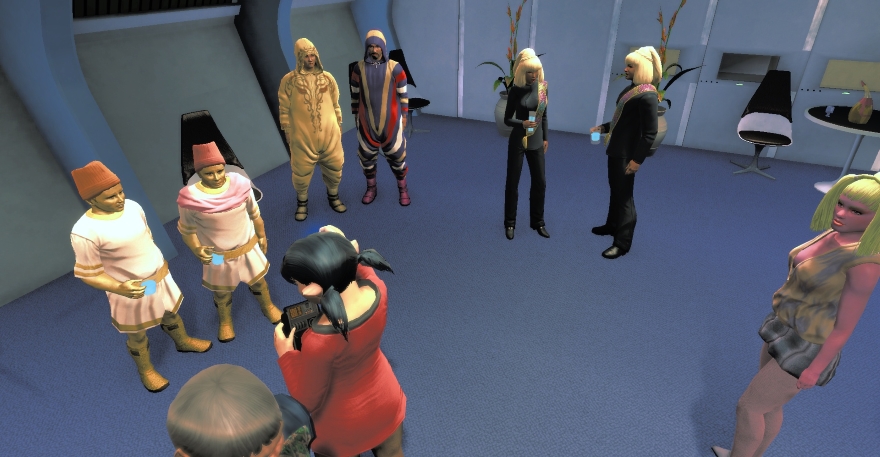 Daniels decides to recruit me to be a temporal agent (because… I guess he likes me?). It’s as good an excuse as any to send me back in time to the events shortly before the Enterprise’s Babel conference. A much, much older Chekov — who is also a temporal agent now — is sent along to babysit me.

Instead of paying homage to a TOS episode, this mission drops the player right in the middle of one. It’s a neat concept, to be conducting a covert investigation during historical events, trying to smoke out the Na’kuhl before they make a disaster of the timeline. Plus, any excuse to visit the Enterprise is a Trekkie’s dream come true.

I did find it hilarious that we finally do see Captain Kirk… and he’s lying face-down on the floor, unconscious. Did I miss something about Cryptic and William Shatner? Bad blood there? Everyone else gets at least cameos with recycled dialogue, but Kirk gets to be faceplanted. That’s weird.

Anyway, it’s a fun jaunt with both Scotty and Chekov providing color commentary (and I can’t get Scotty’s repeated refrain of, “Good work! Now get back to that bomb.” out of my head). It’s not even that difficult or long, lacking a space segment entirely. 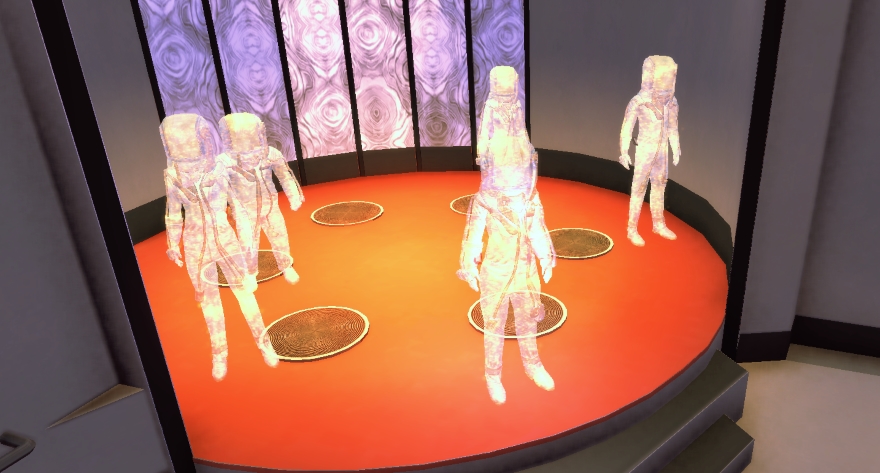 I suppose that Starfleet has signed my ship over to Daniels entirely now, because he’s calling the shots and I don’t even have the option to ask H.Q. if that’s OK or not. This time around he’s concerned that history’s been bent out of shape concerning the xenophobic Tholians. Time for another jaunt to the past — two years ago, to be precise — to set things in motion for the episode “The Tholian Web.”

Lots and lots of space battles this time around, which normally I would love, but Star Trek Online’s first 10 levels are a snooze-fest when it comes to this part. You have a very basic ship with only a couple of weapons and options, so fights tend to be hitting the spacebar to initiate combat and then just waiting for a minute or so until it resolves. I used the time by honing my Picard impersonation: “Make it so! Make it so!”

It was a neat fanboy moment to get the EVA suits (which were only seen in that one Tholian episode) and board the alien ship. I like that Star Trek, from time to time, acknowledges that perhaps every alien species doesn’t breathe the same air and thrive in the same temperature setting that we do. 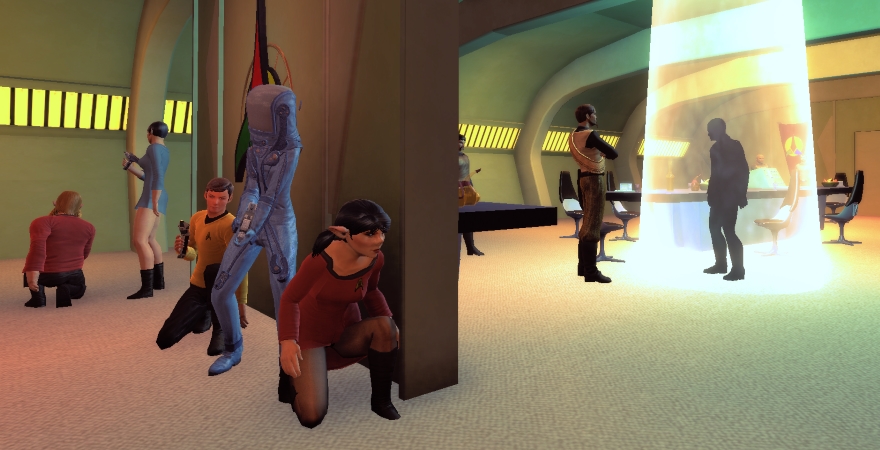 The Battle of Caleb IV

The final episode of the six-mission series exclusive to 23rd century captains, The Battle of Caleb IV is surprisingly disappointing. Oh, it does the job done of getting you and your crew from Kirk’s era to the main setting for Star Trek Online, but there’s not much of a story here, just a set piece involving Klingons, an ambush, and a whole lot of ship battlin’.

Since there really isn’t much to talk about for this mission, I thought I’d instead sum up this intro series’ high and low points. Let’s start with the former: Agents of Yesterday really pulls out the stops in drenching the player in TOS nostalgia. The sounds, the music, the visuals, the weapons, and the sets are as authentic to the ’60s show as could be. And it’s quite fun to run around them, archaic though they may be. There’s a lot of episode homages and a couple great cameos (although Chekov’s is a little befuddling).

But here’s where the success of replicating this era bites the game in the butt: Just when you get used to the 23rd century, you’re abruptly yanked out of it and transplanted to the 25th. It all ends up feeling like an overly long tutorial rather than a proper story arc, and I think that there will be a contingent of players upset that they can’t just stay in the 23rd century and play there, rather than merely visit via time travel.

These missions also suffer from some of Cryptic’s wonky tech, including absolutely scary lib dubbing, not-so-smooth scene transitions, and in one memorable case, a character that was talking to a blank room because the game decided not to portray my captain.

It’s also a really short expansion, with these six missions making up over half of the 11 mission total. Even so, I am looking forward to seeing what the others have in store, because jumping around in Star Trek’s timeline is fanservice in the best way possible.