So there’s this thing right now. It’s kind of a craze. Maybe you’ve heard of it? Pokemon Go? Yeah, I thought so. The thing is, I myself am not even slightly tempted. As much as folks are flocking to this game, I don’t even have an iota of interest. I did watch the cartoons when I was younger, but the game doesn’t grab me.

But the idea of this kind of gameplay technology does.

When the Pokemon Go discussion turned to using this game style for other things, my interest was piqued and my imagination took off! You might say that Pokemon Go is singularly popular because of the IP and the way it transitions so well into the real world. Well, I know (and love) another game that is seamlessly integrated into the real world: The Secret World! The thought of hunting down investigation missions or lore from TSW got me pretty excited. And what about EverQuest II? Take its collection of shinies and strew them around the world, and suddenly I’m poised to buy a new smartphone. I may not want to hunt and capture pokemon, but hunt shinies and lore? I may never be indoors enough to even play other games!

Both ideas were simultaneously so awesome, I couldn’t decide which one I’d focus on first — hence this week’s mash-up of both the EverQuesting and Chaos Theory columns. 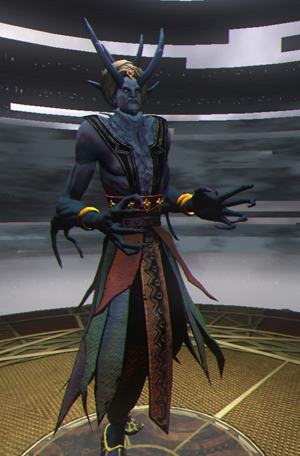 I think The Secret World would be a perfect IP to use this type of technology for a mobile interactive game. The game is already about fantastical things of legend and lore being a part of our world. It certainly is no stretch of the imagination to think of things from our world out in our world. In fact, I’d find it pretty awesome. I think a GO game (yes, a different title is in order, but just for clarity’s sake I’ll use it here) would be perfect.

I know there is already a TSW-esque ARG that is still running. Remember The Black Watchmen? I signed up for it in the beginning and still get updates on that even though I no longer participate. The thing with that ARG though is that only certain people can participate in certain ways at certain times. Sometimes the community needs to crack a code. Other times people in a location are looking for something. If you aren’t good at codes, or you aren’t in that location, you can’t really be a part of things. The ARG is a giant community collaboration, but on an individual level there isn’t always much to do.

If you made a TSW Go, however, it would be something an individual can participate in on their own anytime they have the time. There are ways to be socially interactive, like sharing things you’ve found. I’d be all-out giddy if there were actual investigation missions you could complete, but I think this would be hard to implement. The lore of the game, on the other hand, would be an ideal thing to hunt around and find. And hey, we already know that devs wrote a ton more lore for the new Museum of the Occult! Just think how insanely educational it could be to learn about all the various folklore of our world in this manner.

I’d be up for finding not only the lore, but different instances of the various creatures from the game. Your motivation could be to tag said creatures for removal by your faction. Then factions can gain points for whomever is cleansing the world the best. Maybe there are bonuses for whichever faction is in the lead, such as “better tech” to wrangle down and tag bigger or rarer monsters.

Now, tie those finds and accomplishments into perhaps t-shirts or museum statues to show off inside The Secret World, and you’ll have a built in audience to start as well as a chance to pull in more. So many folks have smartphones, and plenty more would love to do something when on break at work or when out and about, times when you just can’t sit at a computer and log in. Personally, I think there is a market for something a bit more adult and a bit darker. And besides, what age doesn’t love vampires, werewolves, and all that stuff? Suspense and horror are no small market, and by moving TSW to something mobile, you actually open up your niche to a much broader audience.

When it comes to the idea of collecting things, I can’t not automatically think of EverQuest II. This is the game that addicted me to shinies! Here we are 12 years later and I still stop to pick up those beckoning little glowy bits on the ground whenever I am in Norrath. So of course I’d be all for taking my favorite part and adding it into my life more with a Go version. I also think this feature would be the easiest to implement, as random shinies truly can just spawn anywhere.

Sadly, EQII doesn’t really have the same broad topic of appeal that TSW does with its horror/conspiracy theme; fantasy is way too broad, and EQ is too narrow. I realize it is even less likely to be made, but the idea intrigues me greatly. I’d love to experience that rush of discovery, the anticipation wondering what it is, and the accomplishment of getting those rarer pieces and completing the collection… all while out walking about my new town. (Hey, as a bonus I will learn where stuff is better!) I also promise to be more careful with my life than I am when going after a Norrathian shiny!

Again, I’d love to have the accomplishments for finding and completing specific collections to have a tie into the game proper as well as some specific rewards in the Go version.A cape, a housing decoration (paintings would be awesome), or some other cosmetic item to show off in the MMO would be awesome. In EQII you have special goggles to help you see a new type of collection, so you can win that in the mobile version. You can also do the holiday-themed collections to correspond with the holidays and festivals in the MMO.

Another idea that could work that fits with the festivals are the timed races that involve running through the event’s item (e.g., hearts at Erollisi Day) to collect as many as possible. This could get the blood pumping even better than a walk! However, since this involves a bit of speed, it should probably be confined only to parks. Even then, the possibility for accidents is pretty high. On the other hand, collecting the roses on the ground during Erollisi Day or the fliers from the heroes festival and “giving” them to others (anyone with a phone?) could also be ideas.

What dreams may come

I know, these may be a long shot. A long, long, long shot. Maybe the markets are a little too niche compared to pokemon for developers to take the leap. There isn’t that saunter-back-into-my-childhood appeal to rake in the masses. But I think there is appeal! Just because they won’t be a sweeping craze doesn’t mean these ideas couldn’t succeed. However, these thoughts are pretty much already filed under pipe dreams. But I am still going to dream! And if any devs wants to grab these ideas and run with them, I support you 1000%!

Tell me, what aspect of what game would you fall in love with in this kind of format? Which of your favorite MMOs would you like to see get up and GO?

TERA and PUBG publisher Krafton files for preliminary approval of its...

Amazon and Leyou have canceled that unfinished Lord of the Rings...