Earlier this month, the latest addition to Nexon’s perpetually expanding stable of MMORPGs, Riders of Icarus, took wing into its “soft launch,” or open beta, whichever meaningless term you happen to prefer. However soft the launch may be, the fact remains that the game, which largely centers around the taming and training of a variety of mounts, both terrestrial and aerial, has by all meaningful parameters gone live.

Over the last couple of weeks since the game’s release, I’ve spent the majority of my admittedly limited leisure time working my way through RoI’s early game. Although Riders, like almost all games in the genre, contains a great deal more content than I’ve yet had the time to experience, I think I’ve seen enough to provide some first impressions. So go ahead and saddle up, ‘cause we’re going for a ride.

When I booted up the game for the first time, my initial impression was a positive one, largely because the opening splash screen features a gargantuan sky-whale with a ship’s cabin strapped to its back. I’m sorry, but that’s just objectively awesome. But I was also pretty impressed with the overall process of character creation.

Riders of Icarus offers players the choice of five character classes — Assassin, Berserker, Guardian, Priest, and Wizard — each with its own distinct playstyle that you can probably surmise based on the class names alone. Assassins are quick and agile attackers, Berserkers specialize in hitting hard with massive weapons, Guardians are sword- and shield-wielding tanks, Priests are holy-magic users with a penchant for healing, and Wizards are all about blowing things up with explosive arcane magic. As far as aesthetic customization is concerned, RoI provides a pretty staggering variety of options — ranging from hairstyles to body types to tattoos, to name a few of the many categories — plus a more than adequate array of sliders for detailed adjustments. 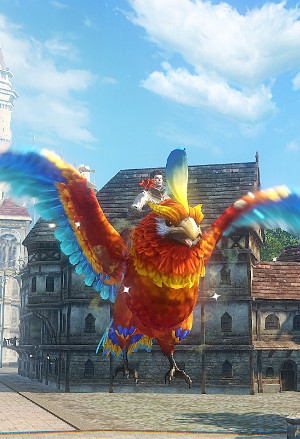 I also can’t rightly deny that Riders of Icarus is a visually impressive game. Although the graphics aren’t exactly on the bleeding edge or anything like that, the textures are sharp, the models are detailed, and the animations are for the most part slick and fluid. It’s also worth noting that the game’s cutscenes are fully voiced, and while the voiceovers may not be the best I’ve ever heard, they’re definitely a cut above the average MMO voice-acting quality. Once I made it through the tutorial and into the game itself, however, the shiny visuals and fully-voiced cutscenes gave way to what ultimately amounts to a fairly generic theme park MMORPG, albeit with a few noteworthy features, which I’ll get to in a minute.

First, though, I’d like to talk about questing and combat, which together comprise the vast majority of the early game (and probably the rest of it, too, for that matter). Questing is a decidedly rote quest-hub to quest-hub affair, and even in the early levels the sheer number of quests you’re given at one time is borderline overwhelming. This relatively minor issue is compounded by the fact that the quest tracker’s design severely limits the number of quests it can display at one time, meaning that keeping track of everything you’re supposed to be doing can be a rather tedious affair.

Combat is somewhat more ambitious, but likewise ultimately falls somewhat flat. Although you’re offered the choice between traditional controls (i.e., tab-targeting and hotkeys) and “action” controls, which changes the camera mode to mouselook and frees up LMB and RMB for attacks and skills, the difference between the two is largely superficial. Even though the action-style controls provide you with a crosshair, it seems largely pointless; all it does is make it so that when you activate an attack, it will set your target to the mob that is currently targeted by your crosshairs. Once your target has been set, however, all of your attacks will be aimed at that target until you manually change your target via good old-fashioned tab-targeting, so the primary benefit of mouselook-targeting — being able to easily switch to different targets on the fly simply by looking at them — is nullified.

Riders of Icarus’s combat also incorporates a combo system. By using specific abilities in a particular order, players can activate combo attacks that trigger additional effects such as increased damage or status effects like stuns. It’s not exactly a groundbreaking system, but it is one that makes an otherwise mediocre combat system somewhat more engaging.

Or at least it would make it more engaging if it weren’t for the fact that the controls frequently seem sluggish or downright unresponsive. Part of this, I think, can be attributed to the fact that there doesn’t seem to be any sort of ability queue, so if you attempt to use an ability even a fraction of a second before its cooldown is up, it won’t activate. However, even when taking that into account, there have been times where I’ve been mashing an ability’s hotkey as it came off of cooldown, and even then it simply refused to execute.

This has led me to many a frustrating death, as my Assassin relies heavily on his dodge ability for damage mitigation, but more often than not, the ability would either go off some moments after I pressed the hotkey (and thus some moments after the attack I was attempting to dodge) or would just not activate at all. The fact of the matter is that other games — Blade and Soul comes immediately to mind — have implemented combo-centric combat systems with much greater success than Riders of Icarus manages.

The real draw of Riders of Icarus, however, is the game’s mount system. The game is called Riders of Icarus, after all. This system isn’t really a single system so much as a series of interwoven ones, but at the root of all of them is the core mechanic of mount-taming. Throughout the world, players will encounter a variety of creatures that they can tame and subsequently use as mounts, pets, and more.

Taming a mount is done by way of a minigame which, to be frank, is frustrating more than it is anything. When you hop on a would-be mount’s back and attempt to wrangle it into submission, you’ll see two bars: one indicating success, one indicating failure. You’ll also see four icons, each corresponding to one of the directional keys (WASD by default, natch), and occasionally one of them will light up and you’ll have to press the respective key, but to be honest, it still seems to come down to luck more than anything else.

There have been times when I’ve been taming a mount and pressed the correct keys immediately when prompted, but for some reason the failure bar still filled up first and I was unceremoniously thrown to the ground. There have also been times when I just wasn’t paying attention and missed half of the key cues but still succeeded in taming the mount. While succeeding at the minigame undoubtedly does cause the success bar to fill up more quickly, the failure bar’s progress seems to be based almost purely on RNG, so even if you perform perfectly on the minigame, that doesn’t necessarily mean that your taming attempt will succeed.

Regardless of the RNG-fuelled frustration of the taming minigame, I do have to admit that the mechanics of the mount system itself are impressively expansive. You can, of course, use your tamed mounts as modes of transportation and ride (or fly) around the world on their backs, but that’s only the start. You can also use a special item to transform any tamed mount into a pet, shrinking it down to miniature size and allowing it to fight by your side. Mounts and pets level up and learn new abilities as you use them. 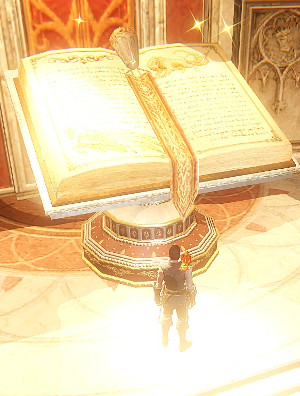 Perhaps the most interesting and unique mount-related mechanic, however, is the ability to “seal” a mount, turning it into an item that can then be slotted into a piece of equipment to imbue it with additional attributes. Each type of mount/pet has a different array of abilities, and each provides a different attribute bonus when sealed, so there’s definitely a Pokemon-esque “gotta catch ‘em all” aspect to the process of hunting down, taming, and sealing the right mounts and pets to fit your particular needs.

One more thing I wanna touch on before I wrap this up is one particular mechanic, albeit a minor one, that I really adore. Riders of Icarus, of course, features mechanics for gathering materials and using them to craft items. I haven’t really touched crafting yet, but I think that the game’s approach to material-gathering deserves a special mention. Rather than offering an array of gathering skills — e.g., mining, skinning, herbalism, etc. — it’s all rolled up into a single gathering proficiency.

No matter what kind of material you harvest, it contributes toward the advancement of your gathering proficiency, meaning that as long as your proficiency is high enough, you can gather any and all materials you come across. For games like Riders of Icarus where crafting is more of a side dish than a main course, I think that this is a brilliant way to reduce the overall tedium that tends to come with having to farm mats to make sure that your gathering skills are kept up to snuff as you progress through the game.

On the whole, though, Riders of Icarus hasn’t done a whole lot during my time with it to really hook my attention. It has some interesting ideas, especially in regard to its approach to making the taming and raising of mounts a central facet of the game, but the other, ostensibly more important areas of the game feel too sameish and mediocre to make slogging through them just to experience the game’s fresher features worth it. While it may provide a unique experience for players who wish for mounts that serve a purpose other than expedited transportation, Riders of Icarus ultimately doesn’t do a whole lot that other games haven’t already done better.